by Brian Sandalls
in People and Football
on 24 Feb 2020

TurfCareBlog.com interviews Chris Hague; a man with passion for football since leaving school and currently working in Scandinavia 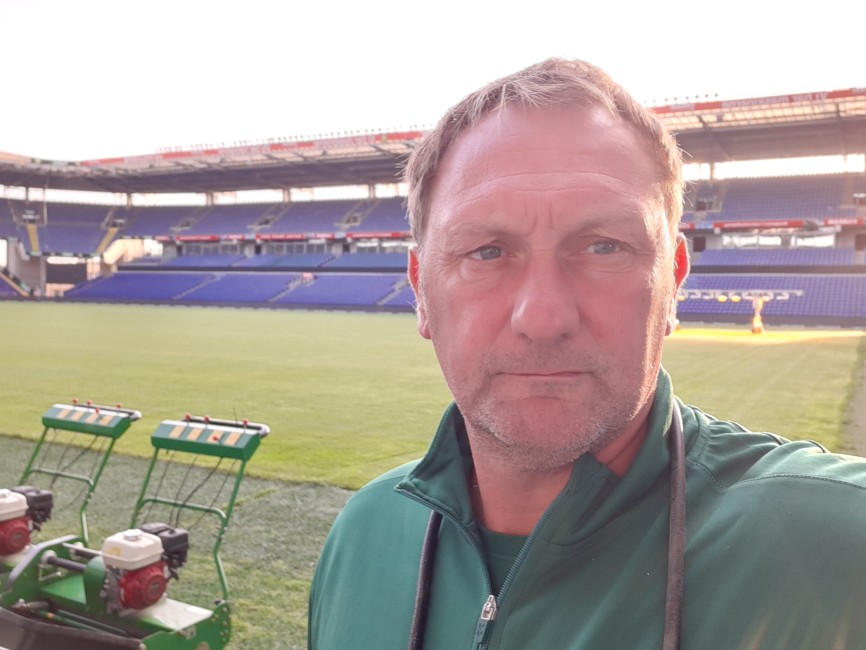 Chris, tell us about yourself and where you work?

I have always had a passion for football and, on leaving school, l started out on my goal to be a full-time football player, leaving home and signing for Northampton Town FC. At seventeen, I returned back up north to Preston.

I worked in my parent's Preston pub, did some casual work on building sites and played semi-pro football for boot money, so in my late teens I had no worries. But, according to my Mum, I had no long-term plan, so in the early '90s I took a sports turf course at Myerscough college. I successfully completed and enjoyed the course so I signed for another three years on the turf science diploma.

I continued playing football and continued enjoying the delights of Preston's nightlife and still didn't have many worries!

In 1995, I joined the grounds team at Wembley stadium. My first pitch event was Bon Jovi and, since then, I have managed pitches through in excess of one hundred non-sporting events; these include Speedway, monster trucks, ice hockey, Mike Tyson and even the Eurovision song contest!

I have managed in five national stadiums pitches and worked in all the majority of the major tournaments, Champions League, Euro League, FIFA World Cup and the African Nations.

With Wembley stadium due for reconstruction my wife Joanne and I moved out to Scandinavia in the late '90s. 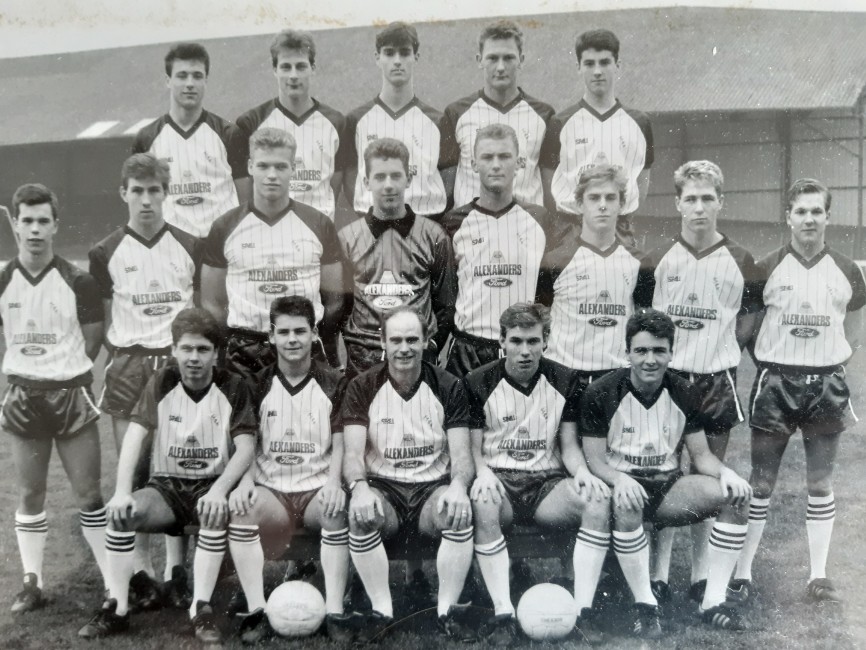 Chris back row second, from the right

What is the major difference, if any, between growing grass abroad in Europe compared to the UK?

Methods and resources. We are seeing a knock-on effect from the English standards impacting into Europe and beyond. The quality, systems and methods developed and practised by the UK groundsmen is pretty much nailed on and, all things considered, produces the best pitches in football.

In my opinion, the UK industry's knowledge has been and continues to be few years in front of most of the leagues in Europe. I suppose that is why we continue to see the export of UK grounds managers overseas and, as a consequence, an improvement in the quality we see throughout Europe.

We are seeing many of the methods and technologies utilised in the UK, now in practice in Europe.

In many stadia I visit throughout Europe, the resources in particular labour, are not at the levels we see in the top level of the UK. In some instances, this determines that you need to rethink your strategy in managing the pitches whilst still aiming for the required performance and quality standards for the pitch.

What new technologies help you do your job and what is the one missing technology to be invented to help within the stadium environment?

Grow lights, stabilised pitches and the groundman's practices have had a major impact on raising the standard for football pitches.

This has raised the expectations of the football clubs for their pitches. Also the continued development of football as a global business and we see pitches from all leagues on television on a daily basis and clubs see the levels of quality possible.

Clubs throughout Europe have varying budgets and challenges and, in many situations, financial support is not there to install and maintain certain technologies or methods. Stadia are predominantly now installing 1000w light systems (as far as I am aware, I introduced the first 1000 watt grow light system into stadia) The switch from 600w to 1000w has create a used 600w market and this has enabled clubs to purchase light systems on lower budgets. Also, the running costs of the 600w is considerably less than the 1000w.

I work with hybrids, 600, 1000w and LED lights and grassroots pitches, so with varying technologies and budgets.

Whilst we continue to implement synthetic systems, in my opinion it's important to continue to understand and implement common sense into the management of the grass plant.

What are the key things grass needs in the stadia environment?

Same as outside the stadia, it's just generally limited in the stadia - Water, air, light and temperature…WALT!

These are the limiting factors for plant growth and, as turf managers, if we can maintain these at the optimum percentages, we can produce a healthy grass plant and quality pitch. If any of these factors are depleted or excessive it can have a negative effect on the plant health.

On your travels have you seen any machinery or equipment that you are surprised is not being used in the UK?

With many companies having global distribution networks, you see many of the same machines and brands overseas. The internet and trade shows have helped to globalise and connect the industry.

In the UK stadiums, the groundsmen use a lot of pedestrian machinery, but in many stadia facilities I have visited funding for the machinery and the groundsman to operate it is not an option. As an example, you could have two to three guys managing a number of pitches, so to cut the pitch with a pedestrian rotary isn't practical as you also need to get outside and cut the training grounds. As an industry, we also have to be conscious not to price ourselves out of the game. It's not one system fits all.

The football clubs we represent are businesses. 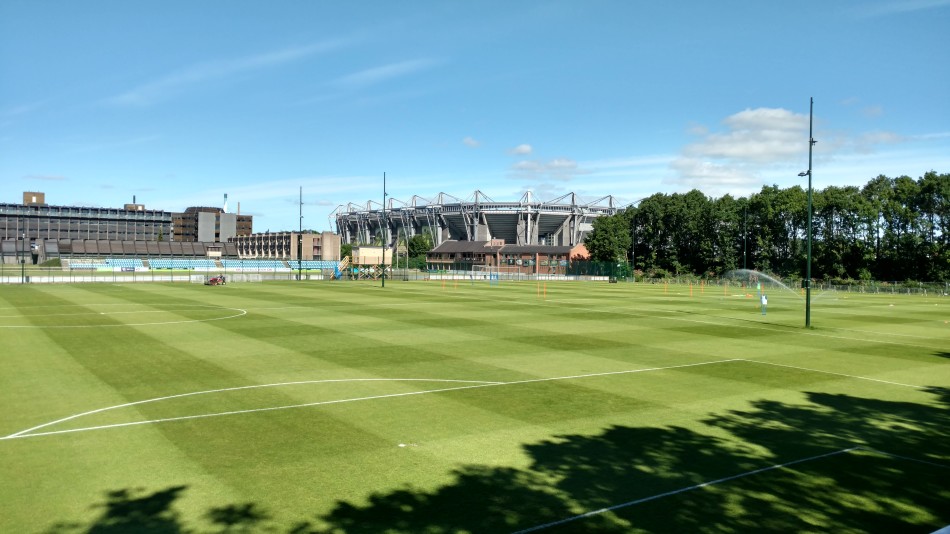 Does your pitch contain hybrid stitching and what difference does this make?

In terms of playing quality, the hybrids have proven their value. The fibres help to maintain the stability of the pitch. I manage stadia and training ground hybrid pitches, as well as non-constructed clay based natural pitches.

Ideally, clubs or facilities (if the land is available) would a have a combination of hybrid/stabilised, natural and artificial pitches installed and, therefore, all bases are covered.

The elite players would use the hybrids and natural pitches, and the younger players on the artificial in mass and have more young players participating. As the young players progress and develop they move onto the elite grass pitches. When on the grass pitches they don't want to go back to the artificial. Many companies have advised me that the progression of the game is to be played on artificial as it's a "generational thing". In practice, I don't see this as the young players, when they make the grade, still want to play on grass.

What was your biggest challenge of 2019 on the pitches?

Managing pitches from FIFA/UEFA stadia standard to grassroots pitches and budgets so I don't see it as one specific challenge.

The daily challenge or responsibility is to provide the players and coaches with the pitches they need to practice and perform. This is to be delivered within the club's financial plan and expectations.

As most groundsmen we face challenges with:

I am sure most groundsmen can relate to the above!

What changes would you like to see within the industry?

In my opinion, is would be productive to see a closer working relationship between the groundsmen and the coaching staff. In some clubs I see it, but in others there is not enough constructive communication.

Continued and increased provision in grassroots football. There are so many benefits for young players being involved in sport and, for me, sport should be number three on the school curriculum behind only maths and languages.

Any advice for anyone thinking of working aboard in stadium environment?

Consider the pros and cons of the move and also what's the worst-case scenario. Also take advice from turf managers that have made the move.

Try to integrate with local suppliers don't alienate yourself.

Remember, it is not your pitch you maintain, it is for the club and players. Be constructive, open minded and supportive to the team and the club, the pitch is a business.

Results equal resources and in my opinion by achieving results we can generate support from the clubs and this strategy has enabled clubs to improve their technologies and resources, including investing in the groundsmen.

Why do you think British groundsman make some of the best in the UK and abroad?

I think a combination of factors has contributed, the continued development of football in the UK and standards and expectations from all involved.

The knowledge base and education resources are also high in the UK.

There are a number of industry groundsmen leaders, in my opinion, born and bred in the UK and this inspires potential young grounds managers.

A number of industry innovations and practices have been implemented in the UK and we see these innovations improving the quality of pitches in Europe and beyond.

There has been substantial investment in the UK's top clubs and pitches and the UK groundsmen have demonstrated to the football world what is achievable.

Install the foundations and the right guy to manage it is all that's required! It's a simplistic and successful philosophy.

Why would other leagues not import that proven strategy?

Any top tips for grassroots groundsmen in terms of managing goalmouths and centre circles, maintenance or type of grass/seed or others?

In the goal areas on training grounds I install hybrid turf. The hybrid maintains the pitch levels when we lose grass cover.

In terms of seed, if it is an option introduce creeping grasses such as poa pratensis. I appreciate this is not an option in many situations due to the establishment period of the grass.

Advise the pitch owners or schedulers of the consequences of overuse, particularly in times of limited grass recovery. Educate the planners and investors.

What does the future hold in 2020 for your team?

We are also set to implement a new initiative in the coming weeks which will benefit the game and our work.

The pitch was set for a reconstruction a number of years ago, but by improving the quality and understanding what we are dealing with in terms of the construction, we have managed to delay the reconstruction and save the club a substantial investment. But, after four years on the hybrid, we do need to "clean out" the pitch surface, remove the organic and reseed.

You can read this and other blogs at https://turfcareblog.com/