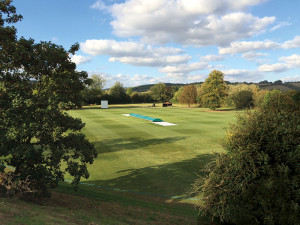 Just thirty-eight miles from the centre of London, Culham Court Estate enjoys as glorious and unspoilt a setting as can be imagined. Deputy Head Gardener/Groundsman, Michael Vickers spoke to Kerry Haywood about his career path and the envious role he now undertakes.

Standing on a gentle slope above the river, about two miles from Henley On Thames, the estate commands a 180o panorama of the Thames Valley in which barely a building is to be seen; a view that is as pristine now as when Culham was completed in the early 1770s. It comes, not only with a mile and a half of Thames frontage, but an estate that has almost regained its 18th-century boundaries, thanks to judicious purchases by the previous two owners. Viscount Hambleden, grandson of the second W.H. Smith, who bought the estate in 1895, gave protective covenants over land on both sides of the river to the National Trust, safeguarding the landscape in perpetuity.

Today, Michael and the team of six full-time gardeners (including the Head Gardener Alastair Robertson), one part-time and two apprentice gardeners, look after a large portion of the 1,100-acres, consisting of farm land, a deer park, a wild flower meadow, a cricket pitch, a croquet lawn, a maze, a walled garden, formal lawns, rose gardens and woodland. Culham is 718-acres and Remenham is 437-acres. The whole estate, Culden Faw, is just over 3,300 acres.

The Walled Garden, Bothy, Gardeners Cottage, Orchard etc are 4.76 acres. The garden around the main house, the flower meadow and the cricket pitch are 32 acres. 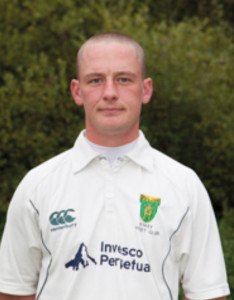 Michael has been at Culham Court for just two and half years and joined as a groundsman before gaining promotion to his current role. He told me he has been in the industry for ten years and started out on the grounds at The Oratory School in Berkshire. "After seven years of hard work and completion of NVQs, I worked my way up to Deputy Head Groundsman. I left there and spent a year as Grounds Manager for a private Grounds Maintenance and Management firm called Groundworx."

"Education was never a big thing for me" Michael continued. "I wasn't very good at school and never really took it seriously. I left school at sixteen and completed an apprenticeship in panel beating, but it was never really the route I wanted to go. In hindsight, being made redundant due to not having a driving licence could have been the best possible thing for me. I spent three months working in a local pub from November to January and started at Oratory in February 2005. The Oratory spent a lot of time and expense taking me through extensive training of NVQ Levels 2 and 3, spraying, digger, MEWP qualifications and many chainsaw tickets including climbing and chainsaw from a rope and harness."

"I look back fondly on my time at the Oratory and, although I didn't know it at the time, I've realised recently that, Andy Burnham, now Head Groundsman at The Oratory Prep school, was very influential and an inspiration for me. He worked at The Big Oratory as Deputy when I started there. We had met a bit before I started as he was cousins with a good friend of mine at the time. I got on with him and still do very well. Seeing how good he is at his job, and the pride he took from making things within his job look fantastic, did inspire me and I always wanted to hit the high levels he achieved."

All of this experience has put Michael in good stead to deal with the issues he faces at Culham Court, including some of the coldest winds he has ever experienced and floods every winter on the low land and cricket pitch. As a result, the cricket pitch is reseeded each spring and, given the pitch has spent eleven months under water over the last two winters, it takes a lot of hard work. Currently, the pitch is mainly used by a family friend but Michael is hopeful that a local team, such as Henley Cricket Club, may be able to use the facility in the future. 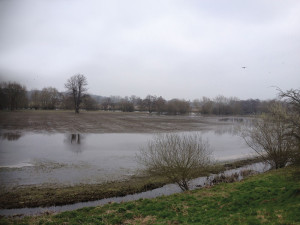 As you can imagine, the soil type on the lower land is very silty due to the floods and the valley positioning, however on higher ground it's extremely chalky. Maintenance is pretty standard stuff and Michael uses his John Deere Triple 2653 mower as much as he can on the cricket outfield and lawns etc., whilst an Amazone Profihopper is used for various other areas. An Allett C24 cylinder mower is used on the croquet lawn during the growing season and Michael feels this has significantly helped to improve the playing surface. The lawn also benefits from a fantastic pop up system, installed by John Mawson Irrigation.

A fleet of Honda roller mowers come into play for winter use and all other areas during the summer.

Servicing of all the equipment is carried out by Michael himself and, although he is self taught, there are rarely any problems. Local John Deere dealer, Farolls, are always on hand if required.

Michael said "I like to spray at six weekly intervals during the spring and summer (weather permitting) and renovate twice a year; lightly in the spring and also aerate twice yearly when possible. I treat all my fine turfed areas the same with slightly different material but, basically, it's scarifying, aerate, seed, then topdress."

Pests and diseases are kept at bay using regular spraying methods however, there is the occasional common red thread disease and the odd fungal infection. 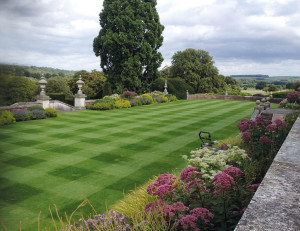 In terms of wildlife, geese are a nightmare and there are many large active sets of badgers that quite often cause a lot of damage. Michael commented: "We have a wild flower meadow, many bird and owl boxes and re-use rainwater in the glass houses."

"I'm constantly looking at areas to improve. It's my third year, on such a big estate, and I'm still getting round to areas and seeing things that I want to do. I deal direct with our accounts department for planned work and I have to put in an expenditure request for the upcoming month. However, if there's anything we need to purchase, which is of a large amount, then I need to gain prior authorisation from the owners or the Estates Manager, Alex Dick.

Working on an estate like this, means presentation is of the upmost importance and, although Michael thinks that, in most cases this job is undervalued, the owners really appreciate the teams hard work to get it looking its very best.

Michael concluded: "In the commercial side recognition should have much more importance in our field. I don't think head groundsmen are given enough credit. The majority of the time, no-one really knows who the head groundsman and their staff are. In my opinion, they are more important than the people who use the facilities and they deserve more recognition. But then, from my own experience, a good groundsman is usually a little too bashful to accept the praise."