0 Climbing up on Salisbury Hill 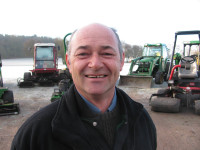 Market Drayton golf course is an 18-hole course set in the rolling Shropshire countryside surrounding Brownhills Wood and Salisbury Hill. For the historians amongst you Salisbury Hill was named after the Yorkshireman, Lord Salisbury.

He chose the elevated position over Market Drayton to overnight with his troops following his victory against the Lancastrians at Blore Heath, three miles away. The site was secure because it had a wooded flat top, steep sides and excellent views all around.

The parkland course, where the back 9 holes are played around Brownhills Wood and the front 9 go up and over Salisbury Hill, was built over a former 120 acres of farmland which has, in the past, been mined for sand and gravel and so offers generally free draining sandy soils.

My career started in Stoke at Trentham Gardens as a gardener, near where I still live. After that I spent ten years working as 1st assistant to the Head Greenkeeper at a nearby golf club. It was here that I learned my trade, whilst attending Reaseheath College for my formal qualifications in sports turf management.

In 1990 I was offered the Head Greenkeeper's position at Market Drayton Golf Club and have thoroughly enjoyed the last twenty years managing and improving the course. 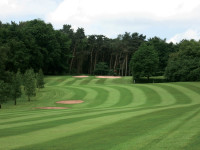 The main problems at the course have been due to the original construction methods of the greens, these being soil based push-up and cut-and-fill greens with no drainage. In 2001 the twelve most poorly draining greens were Lytag banded, this operation was followed by extensive hollow tining, vertidraining and topdressing to bring the surface back to level. The results were, as expected, dramatic:

By 2007 the bands began to fail and the previous drainage problems began to return. Having looked at various drainage solutions it was decided to re-band the greens using the 'Wizz Wheel' technique. So, that year, we started a three year plan of wizz-wheeling and Lytag backfilling six greens per year, with the exception of the 8th green as it is high and dry. 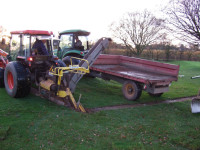 However, the plan has fallen a little behind schedule for various reasons but we anticipate finishing the remaining five greens in August 2010. Each Lytag band was 25mm wide x 300mm deep, at 500mm centres across each green. Over the last three years we have used around 190 tonnes of Lytag as backfill.

The vertical sand filled slits are 3mm wide, 20/25mm deep with a 25mm spacing. We averaged 2½ tonnes of topdressing per green. Limagrain bent seed is fed directly into the slits, instead of surface broadcasting, which has dramatically improved germination rates. During trials on our greens in 2009, I found the MM9 germinated two days earlier than other seeds trialed. 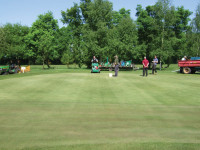 The greens that have received both banding and graden work have improved greatly. They are firmer through the winter, drain quickly, remain true, sustain desirable grasses, and there is less thatch evident and fewer disease outbreaks.

Once the drainage process is completed on all planned greens, we will move to a single invasive maintenance operation. This includes hollow-tining, vertidraining and gradening which was, historically, carried out in the spring and autumn, creating two periods of disruption on the greens.

We now plan to do all eighteen greens once a year, during August, ensuring the best possible recovery. With ground temperatures at their highest, seed germination should be rapid, ensuring a speedy return to normal playing conditions. This operation will be evaluated and monitored over the short and long term and any necessary adjustments made.

The 80 tonnes of Bathgate's TD 4 used for topdressing on the course will increase to 100 tonnes through the year, with a light dusting applied during the growing season every two to three weeks. This will be carried out in conjunction with a scarification in spring, verti-cutting as required to maintain trueness and pace, and micro-tining to a depth of 125mm to maintain surface drainage, air exchange and improved rooting. 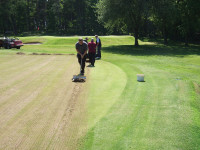 Increased aeration through the season is essential to substitute the previous spring hollow tining. This maintenance programme will ensure the greens are kept to the high standards that visitors and members have come to expect. The quality of the greens is reliant on sound drainage and, as wizz wheel banding has a limited lifespan, plans will be put forward for future drainage requirements.

Only some of the tees have had to have drainage installed and the rest seem to drain naturally, along with the fairways. Vertidraining, scarifying and hollow tining keep them at a satisfactory level.

On the tees, we have started to use dwarf perennial ryes as they are more hard wearing, although we use mats on the short holes through the winter. These are 50mm pile with a sand/rubber mix, but they do go hard, so we micro tine them occasionally to soften them right up, although we set the tines to go just into the sand. 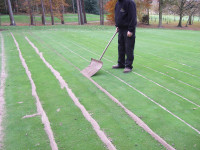 We haven't carried out any over seeding on our fairways for at least five years - since the last drought. Instead we confine any seeding to divot seeding by the staff and occasional divot evenings with club members; the greens committee do a wonderful job of divoting tees through the summer and any other tidying jobs that may arise.

Our bunkers are one of the next areas to address. We are after a consistency with the sand across the whole course. We have sixty or so bunkers, which become hard after rain due to lack of drainage and sand that is contaminated with worm casts that wash off the fairways. There will be a need to install a drainage system lining in some of the bunkers, and some bunkers will need re-modelling to change the way that water runs off the fairways. We hope to change all the bunkers to Bathgate 45 over a number of years.

During the summer the greens are cut every day at 4mm and, in the winter, at 5.5mm using John Deere's 2500E; its quiet, fuel efficient and produces a true cut. Green speed is measured using a stimpmeter through the summer season with an aim to produce consistent roll at 8.5 to 9.5 feet.

There is a lot of grass on the course and, with a staff of just four, we spend the majority of our time keeping the grass in check during the growing season. Fairways are maintained at 16mm all year round with a Toro 6500D. Tee tops and green surrounds are cut at 9mm while tee banks and around bunkers are at 16mm to give a staggered cut to improve definition. We use a 1600T John Deere Wide Area Mower for the roughs and a Trimax roller mower for around the fairway edges. 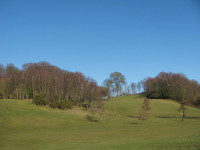 The pins are moved every other day during the summer, and we prepare another capped hole in the winter as there is only one member of staff on rota to cover the membership at weekends.

Our biggest pest problem is rabbits - thousands of them; our 2nd and 8th greens have taken a battering this year. I'm still looking into methods to resolve this problem.

We take a serious view on improving the ecology on the course and we have transplanted trees using a tree mover to provide better habitats for the birds and other fauna. Some areas are set aside, with the grass cut just once a year to encourage small mammals; we now have more mice and robins nesting.

We have also built several ground dwellings for various small mammals in the woodland fringes. Time will tell if they will be inhabited.

We installed a floating raft on the pond by our 3rd hole last year so that the wildlife had somewhere to roost. The moorhens had chicks last summer on the raft which was very encouraging.

We have started to address the situation of low light on the course modelled around the woodland. We will be opening up the canopy to allow better light and more airflow, as well as allowing the lower flora to establish. 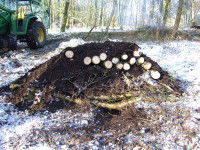 A variety of bird boxes will be positioned in the trees to encourage bird life, and a bat survey will be carried out in the spring and boxes may be added to encourage roosting.

Our irrigation comes from a borehole and feeds a 12,000 gallon holding tank. We use this to water our greens and tees using a TW2 controller, impact heads on the greens and I 21's on the tees. North Staffs Irrigation installed our system.

We are attempting to achieve a zero scar policy from fusarium on the greens, so we are on a preventative cure programme of applying fungicide regularly to keep outbreaks to a minimum. We mix fungicides to our needs, depending on the time of year, being careful not to create any build up of resistance. Chelated iron and seaweed are applied every six weeks to keep up appearances and acidify the sward against attack. eparately, we use a granular fertiliser in the spring and autumn, with regular low input liquids through the summer to control growth rates, especially on the greens where excessive growth reduces green speed and encourages weak growth. We're now down to around 65kgs of nitrogen per annum, and this year's target will be 55kgs. We always use low phosphate fertilisers, soil tests are carried out and always reveal low potash levels and necessary supplements are applied. Two of the granular feeds that we use are organic, using Roots from Novozymes, which provided steady growth and good longevity last year, ideal for controlling green speed.

I use 'Extend' on our fairways, usually twice per year, to help them retain colour and growth, plus a sulphate of iron in spring as a colour up, and we tend to mix 'Despatch' as a wetter with the liquid feeds twice a year. I also add PrimoMaxx in with the liquid feeds through the growing season on tees and approaches to help check high growth periods. This allows us to cut with the Toro 3250 for a tight cut that lasts without boxing off, the time saved is used elsewhere on the course.

We will also be using PrimoMaxx on our greens this year, prior to invasive work, at 0.3 litres/ha. The reason for doing this will be to hold back the meadow grass and help the bents establish in what is, currently, a 70/30 poa/bents mix. The target is to get the bents up to 70% over the next three years; the previous banding did allow bent increases up to 55% on drier surfaces without the use of the Graden at that time.

2010 will be an interesting year, with a need for tight budgetary controls and high expectations of the new maintenance programme. A lot of hard work and support from staff, that always come through when needed. And, with the support of the greens committee and members alike, I am confident that we can deliver the objectives we have set, whilst maintaining the high quality golf course our members and visitors have come to expect.