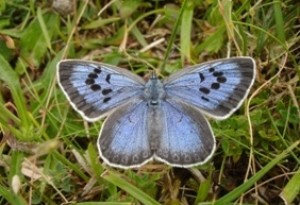 Butterfly Conservation has welcomed the prosecution of a collector found guilty of illegally catching and killing the UK's rarest butterfly.

Phillip Cullen, 57, from Cadbury Heath, Bristol, was convicted at Bristol Magistrates Court of deliberately capturing and killing Large Blue butterflies on two occasions at nature reserves in Somerset and Gloucestershire in 2015.

The globally endangered Large Blue is fully protected under UK law and, alongside the High Brown Fritillary, is listed as the UK's most threatened butterfly.

The court heard that Cullen was spotted climbing over a locked fence to gain access to Gloucestershire Wildlife Trust's Daneway Banks nature reserve, near Sapperton, Gloucestershire on 18 June.

He was spotted attempting to catch a Large Blue in a net by Butterfly Conservation member Neil Hulme, who was visiting the site.

When confronted, Cullen claimed he was attempting to catch parasitic wasps rather than the Large Blue.

The next day Cullen was seen acting suspiciously at Large Blue hotspot, the National Trust's Collard Hill reserve near Street, Somerset and it was here that Kevin Withey, prosecuting, told the court that Cullen again captured and killed a Large Blue.

When officers from the National Wildlife Crime Unit subsequently searched Cullen's house in February 2016 they found an illegal collection of some of the UK's rarest butterflies, including dead specimens of the Large Blue, Heath Fritillary, High Brown Fritillary and Swallowtail.

Cullen was found guilty of three counts under the Conservation of Habitats and Species Regulations (CHSR) 2010 for the illegal capture, killing and possession of the Large Blue at Daneway Banks and three counts of the same offences at Collard Hill.

The case was adjourned for sentencing to 7 April at Bristol Magistrates Court. Chair of the Magistrates Colin Howells said he was considering a custodial sentence.

You can read the full article from Butterfly Conservation HERE