0 Common Bent - a grass for all seasons 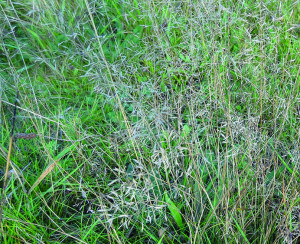 Common Bent (Agrostis capillaris), once known as Brown Top Bent (A. tenuis), is to be found in many commercial grass and wild flower seed mixtures.

Many of the most experienced turf managers seek to create homogenous stands within the context of the green, although this article isn't written to promote or condemn that practice, but more as a brief overview of one of many grass species that make up the variety of useful grasses that are cultivated.

Several characteristics are combined to make Common Bent a useful plant within the context of a green; it produces short rhizomes, underground stems that can create a separate and distinct plant, enabling it to 'fill in' a close mown sward. Common Bent can tolerate close mowing (4mm), though mowing consistently lower than this, particularly during periods of high stress, e.g. wear, creates an environment more favourable to competing plants such as Annual Meadow-grass (Poa annua). It is relatively tolerant to many fungal diseases, in particular Microdochium Patch, also known as Fusarium, Anthracnose, Dollar Spot and Red Thread. 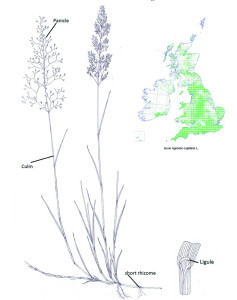 Common Bent is a densely tufted perennial grass with short rhizomes up to 75cm. The ligules of the culm-leaves are 0.5-1.5mm, rounded to truncate (looks as if the top has been snipped off), whereas the ligules of the tillers are shorter, truncate and distinctly shorter than they are wide. Blades of the culm-leaves are flat, 1.5-4.0mm wide and often have the twist on the leaf as an extension of their rolled growth within the culm. The seed-head, or panicle, is between 8-18cm, open with spreading branches and their branchlets all spread widely and evenly, even after flowering (figure 1 left).

Many of the characteristics that contribute to the classification of the mature plant are apparent in the diminutive mown specimen. Although the emphasis on particular characteristics is more useful, all Agrostis species are rolled within the culm, see figure 2 below right; this can be seen if the plant is cleanly cut in cross section. The leaves taper to a point and are distinctly ribbed.

Common Bent (Agrostis capillaris), is native and common throughout Britain. When repeatedly mown, it forms a short turf with a high density of small tillers, making it an ideal component within grass seed mixtures for greens and fine lawns. It naturally occupies large areas of permanent grassland, particularly on poorer soils, on hills and mountains. It is also common in lowland pasture, heaths, hay meadows, and in open areas of plantations, woodland and scrub, although the loss of permanent pasture has led to a slight decline in its abundance. 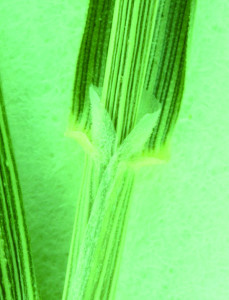 Common Bent grows in a wide range of soils from sands to clay, although it favours moderately acid brown earth soils (in the pH range 4.0 - 6.0) though it can also be found on both very acid and also base-rich substrates. It occurs from sea-level to 1210m, specifically Ben Lawers, the highest mountain in the southern part of the Scottish Highlands and the tenth highest mountain in Britain. Within its natural habitat, it is strongly associated with other species such as Red Fescue (Festuca rubra), Sheep's Fescue (F. ovina), Sheep's Fescue (Anthoxanthum odoratum), Sweet Vernal-grass (Holcus lanatus), Yorkshire Fog, (Plantago lanceolata), Ribwort Plantain (Hypochaeris radicata), Cat's ear and Harebell (Campanula rotundifolia).

As well as being highly resistent to grazing and tolerant of wear, Common Bent is also cold and drought tolerant, making it well adapted as an early coloniser of extremely dry habitats such as wasteland or spoil heaps. Common Bent reproduces largely through outbreeding and seed set from August onwards. Seeds germinate both in the autumn and in the spring, forming a persistent seed bank.