by Editorial
in Synthetics, Industry News, and Football
on 06 Jan 2016 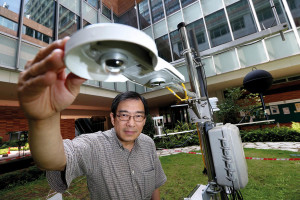 Data compiled by Professor Jim Chi-yung, chair professor of geography at the University of Hong Kong, shows that the surface temperature of artificial turf can be ninety percent hotter than the air temperature in summer, and that athletes and children are particularly vulnerable to heat stress and the risk of heat stroke. This adds to concerns that artificial turf can intensify urban temperatures, contributing to the heat island effect.

According to Chi-yung's data, the surface temperature of artificial turf in 35°C heat can shoot up to a sizzling 70°C, whilst natural turf peaks no higher than 38°C. Chi-Yung also found that the air temperature 50cm above ground was higher than temperatures at 150cm, meaning small children were at greater risk to high heat exposure.

The research also found that heat stress - the effect of heat in generating pressure or discomfort on the body - to be far greater on artificial turf pitches than natural grass pitches. "A human being will not be feeling just the air temperature but the heat sensation," Chi-yung said.

He spent two summers collecting data at the university's Stanley Ho Sports complex in Sandy Bay, over the course of ten consecutive days, with a heat stress monitoring system comprising infrared radiometers and temperature sensors at different levels from the ground.

He criticised the policy of replacing natural turf with artificial grass, noting that the trend in cities such as Singapore and in Japan was to convert more hard ground into grass.

"It is very disappointing that, whilst every developed country is working to reduce the urban heat island effect, the government here is doing things to intensify it," he said.

Although The Leisure and Cultural Services Department in Hong Kong is committed to replacing most natural grass pitches with artificial ones to raise "availability and quality" - and reduce maintenance costs, Chi-yung isn't the only person expressing concerns over such a decision.

Professor Edward Ng Yung-yan, an expert in sustainable architecture and urban climatology at Chinese University, is quoted as saying, even if thermal effects were localised and not directly related to the urban heat island of an entire city, there was no running away from the fact that more natural grass would help to cool down a city.

"The key scientific reason is water evaporation," Yung-yan said, pointing out that evapotranspiration cools both the turf and the air above.

"Real grass, not the fake stuff, has a cooling benefit for entire neighbourhoods." Ng said studies had shown that grass cools the surrounding air by about one degree and reduces radiation temperature by 20 to 30 degrees.

"Real grass is harder to maintain, but it's not impossible," Yung-yan said. "While other cities are moving from the concept of 'garden in a city' to 'city in a garden', we are reversing the trend entirely."

As featured in The South China Morning Post - http://t.co/tcaybwxAgd