by Blair Ferguson
in Schools & Colleges, Rugby, Cricket, and Football
on 19 Jan 2022

0 Conservation to new heights at the University of East Anglia

On World Environment Day, 5 June 2019, the University of East Anglia (UEA) joined forces with other organisations worldwide to declare a climate and biodiversity emergency. Based in Norwich, Norfolk, UEA has led the way in climate change through the Tyndall Centre for Climate Change Research (CRU), the Climate Research Unit and researchers in other UEA schools. Blair Ferguson reports. 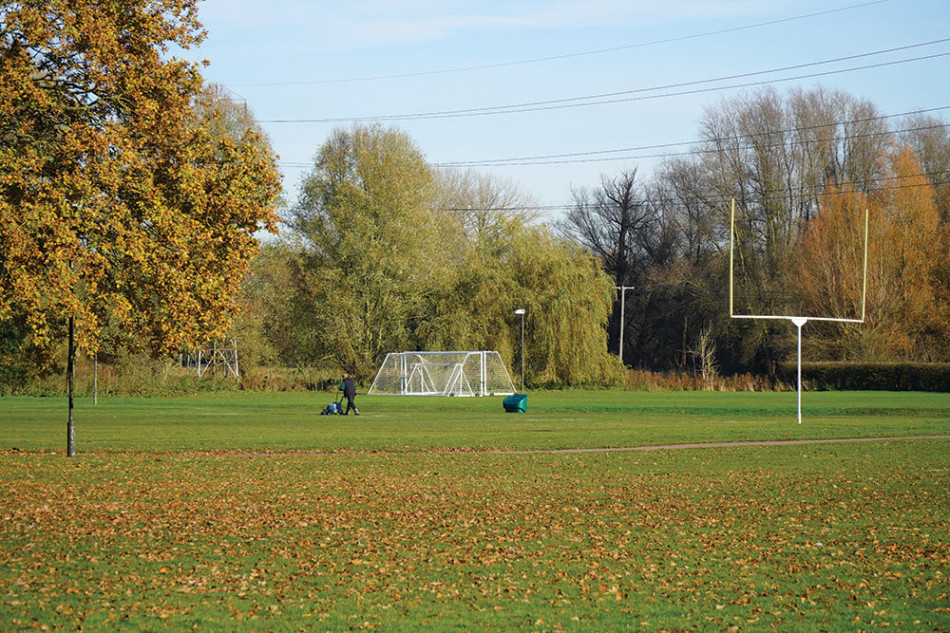 The CRU first brought global warming to the world's attention with the global temperature record and continue to contribute to the world discussion with the Tyndall Centre's Global Carbon Budget, the update for international policymakers on fossil fuel emissions.

Two and a half years after this declaration, the climate discussion has gathered significant pace with the COP26 summit in Glasgow, bringing the world's considerable issues to the fore. While UEA has contributed substantially to the climate change effort, they are also exceptionally conscious of practising what they preach.

The university estates are under the control of Landscapes Manager Tom Everett, who has the considerable job of keeping all of the areas within his 360-acre remit in prime condition while considering the biodiversity within each space.

Tom and his team of fourteen, consisting of grounds people, sports groundsmen and pest controllers, are responsible for the Colney Road Playing Fields, Sportspark, five County Wildlife Sites within the grounds, amenity areas, re-wilded areas, marshlands, woodlands and the UEA broad, all of which are home to over 5,700 species. 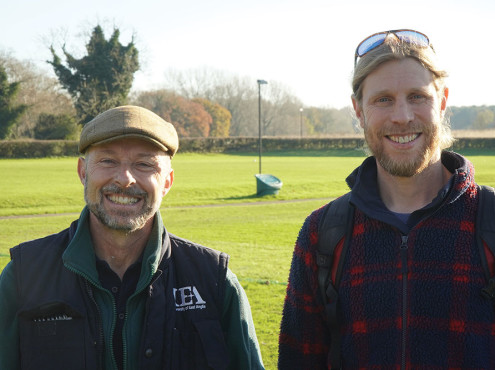 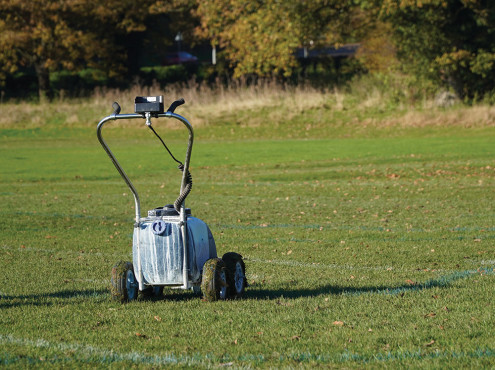 Each area is as important as the next for Tom. He began his time at UEA in 2006 as a digger and tractor driver before progressing to be a team leader and then into the role he has held for six years.

Although the urgent need for conservation is a priority, the needs and wellbeing of the 16,872 student population are paramount, and for a large number of them, sport is a massive part of student life.

The Colney Road sports site lies the edge of campus, with the late November Norfolk sun beaming across the healthy-looking turf and sports groundsman Peter Lewis, who has worked at UEA for twenty years. The twelve pitches and two cricket squares are some of the most used grass areas at the university, and as Tom explains, they are vital to student life.

"I think it ticks a lot of boxes in terms of wellbeing and getting people outside, and we are fortunate that the students want to get outside and use the facilities we have here, and it's really important for us to provide them. It's a big thing at the Uni which is always growing in popularity, so it will be a good driver for us in grounds to put a business case together to say we need more resources over here, and as we slowly claw our way out of this pandemic stretch, it will be good to see that investment."

"I'm sure the university itself is going to expand, and they will be wanting more people to come in, and more people means more sport, so I'm feeling positive about being able to accommodate them."

The principal task to host hundreds of fixtures and training sessions falls to Peter, who this year has the fresh challenge of an additional school using the pitches and portable floodlights that have elongated training.

"Someone will be kicking a ball on the football pitch every day. They are played on every night because we have portable floodlights now. Everyone trained from four o'clock until ten for every sport, and one pitch used to get trashed. Now they all get quite worn because they can move the floodlights around. This is the first year with them, so we are seeing how it goes, but as long as the weather stays nice, we should be alright, but the pitches do look worn because they get used that much more now."

"On a Wednesday, we'll generally have a full house of fixtures throughout the day, and some pitches, like the lacrosse pitch, will have back to back games on it. There are more fixtures at the weekend and training all week, and Stoke Holy Cross has their U9s and U11s using the site constantly all year round."

"The schedule we have makes routine maintenance very important to keep the quality up. On Mondays, I'll Quadraplay every pitch; on Tuesdays, I'll mark out and then on Wednesday, it's games day, and generally, every pitch will be in use. On Thursday, I roll and aerate on rotating weeks, and hopefully, they are in good condition for the weekend; if not, I'll overmark them again. I would aerate more often with the Sisis Meagslit if I had the time, but currently, that is the schedule we have." 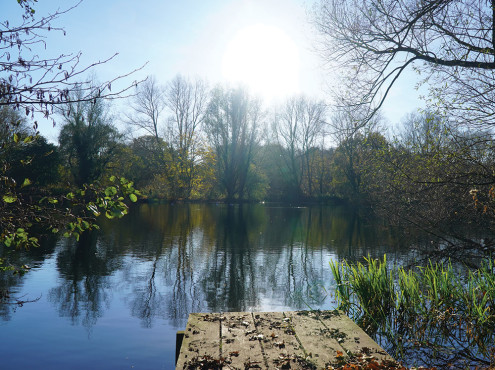 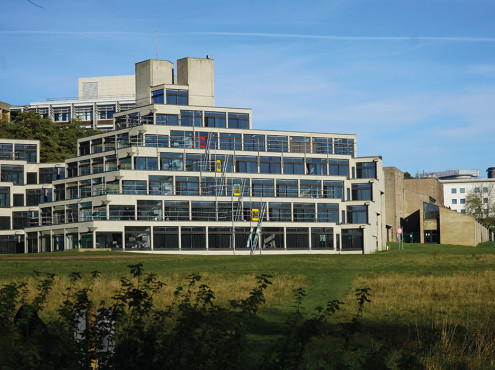 "We do get the natural gaps at Christmas, Easter and during the summer for more extensive work and renovations but because of Covid, that has gone a bit differently. During the summer, we have cricket, and Stoke will be playing on their pitches as well. Because of the pandemic, the students came back for the summer, and everybody wanted to play everything, so we had every sport going alongside cricket, so it was exceptionally busy."

"We missed our renovation during the first lockdown because we didn't have any supplies, but because no one was playing, it recovered quite well. Last year, we managed to seed everything, and it was a good year for seed, and it looked fabulous."

"There is a longer playing season that seems to extend into the summer, but once everyone has packed up and gone for summer holidays, then you're renovating, which isn't a good time of year for it because generally, it is dry as a bone. Lacrosse will finish before anything else, but because we are hiring a lot of gear, you only want to hire it once as opposed to five times, so it all gets done at the same time. Last year, it was ideal because it was warm and rained a lot, but sometimes you put the seed down and won't see a thing until almost autumn when it pops up."

"As I say, we are in our first year with this new programme, and hopefully, with some investment, we can keep the pitches where they are and continue to provide quality surfaces for the teams."

Away from the grass surfaces, UEA's Sportspark also hosts outdoor football, hockey, tennis and athletics to complete the sports offering. Tom's commendation of Peter's passion, experience and knowledge before we depart to view the rest of the campus is well deserved.

Clearly, like many groundsmen, he cares about his pitches, and it is a great credit to him that they are in such good condition with all the use they have.

Stepping a few feet away from the pitches brings conservation back into focus. Many of them have hay meadows created around the edges to promote biodiversity, and just beyond, there are large areas of marshland and woodland. These areas engage schools within the university just as much as sports and play an equally prominent role in an academic sense with studies and research.

Having the buy-in of departments has enriched the work of Tom and his team as they can lean on the experience of lecturers who have helped mould the Biodiversity Management Plan and steer the continued efforts of conservation. 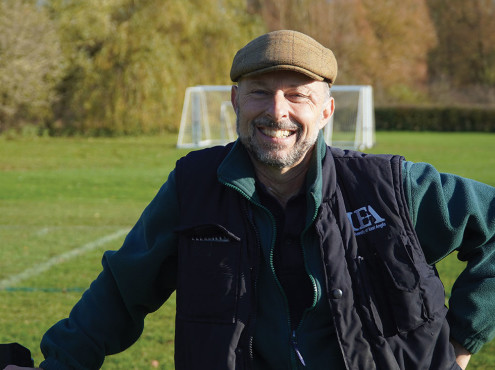 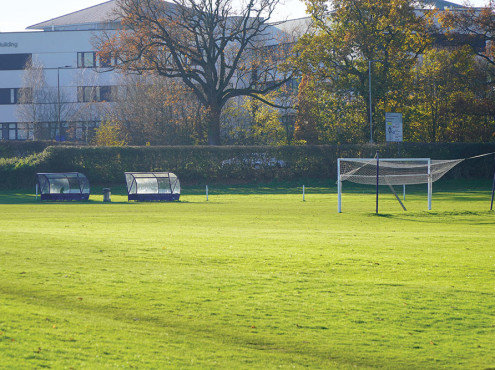 Pete and one of the Colney pitches

"The schools that are situated here undertake a lot of field studies within the grounds, so the school of bio is monitoring the areas of ecological conservation. Environmental sciences use the grounds to take soil samples and look at everything from stone age farming to the makeup of the ground, so it's really useful for us to tap into that knowledge, and they have been really supportive, which is great."

"I think we have to be integrated into the university, and the areas the different schools want to look into are things we all like doing anyway. I don't want to be one of those teams that is stagnant and only do the things we need to do. We like to get involved in everything we can really because if you have the knowledge there, then you should use it, and also, it is lovely to have such a diverse bunch of people around the site because it makes it so much more interesting."

"We're constantly gaining knowledge about what biodiversity is using the site and why. I come from a landscaping background and always appreciated nature, but my pool of knowledge wasn't that significant; but as a team, we are learning all the time, but we now know if we do this, then that will help that. So, for example, we cut the hedges outside of the bird nesting season, and we do all of our shrub maintenance and cutting back at different times of the year, so we don't upset anything nesting and a lot of our work is now concentrated around that - especially in the amenity and biodiverse areas."

"We are seeing a lot more respect for the outdoor areas around the campus now, which is wonderful. I know we have struggled with resources in the past, and I totally understand that, but again, our voice is definitely heard throughout the university now. It is a big thing on the Vice-Chancellor's mind as well with conservation and climate change."

"We have the amenity areas we want to have for student activity for their enjoyment and the presentation of the campus, but within those now, we are looking at ways to improve those areas to perhaps tick some of the ecology boxes. Again, we try to use native species planting within the flowerbeds, shrub beds and trees that are planted on campus to help what is already there."

"There are 360 acres of active ground that we look after. We have large areas of marshland, and they also need managing. You can't let them sit dormant. We have grazing regimes on those with the campus cows, and on the marsh at Bluebell Road, we cut a third back of the tree growth on there, so there's always something to do. We take a lot of consideration in those areas because we have a lot of red-listed species, and when we need to do bank reinstatement work, we have to obtain a licence from Natural England because we have the Norfolk Hawker Dragon fly there." 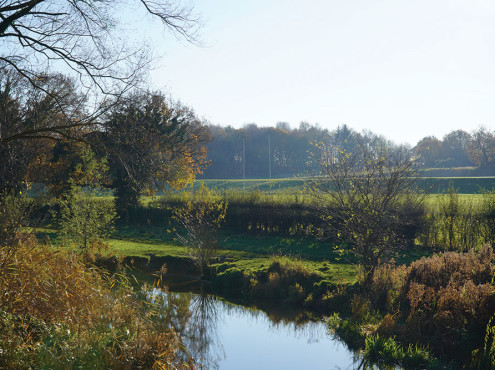 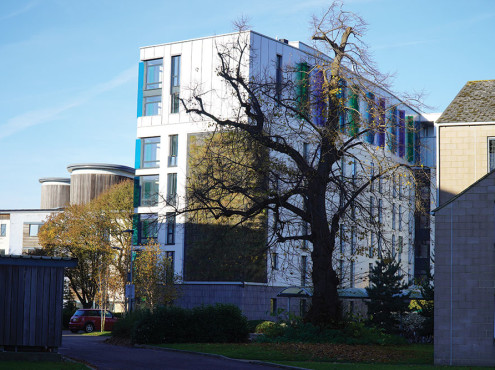 "Adjacent to our sports pitches, we have got some really significant areas of ecological conservation, for example, there is a hill called Lusty Hills, which is a triangular shape and is an acre and a half. There is a lot of biodiversity in there, and we have to be mindful of what we do, even on the sports pitch side of things."

Clearly, the aims set out in 2019 have resonated with Tom, who has taken the time to educate himself and his team about what they can do to contribute. In the future, this effort will include student and staff volunteer groups and the continued contribution of the general public, who are welcomed onto the UEA campus.

The enthusiasm of all involved will be shaped by the new Biodiversity and Conservation Management Plan that is currently being drawn together. Using decades worth of knowledge and expertise, this will likely elevate UEA's conservation efforts to new heights, and through the hard work and dedication of Tom and his team, ensure that the site that has given so much to tackle climate change continues to do more.