0 Council stands to save a third on costs 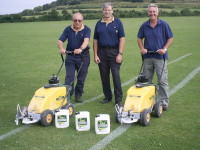 The busy Grounds Maintenance department of a Wiltshire City Council stands to save a third on line marking costs this season, following a change to concentrated paint.

Salisbury City Council currently maintains eight football and six rugby pitches and has outside contracts with Salisbury Rugby Club and Salisbury City Football Club. Once the season starts, depending how often they are going to be used, most of the pitches need to be re-marked every week. "Our pitches are very popular so it's rare that we don't have to re-mark them," says Groundsman Bob Skutt "and there's usually only two of us to do it."

Led by Grounds Supervisor Graham Dewey, who has been with the council for 42 years, the Grounds maintenance team changed to Vitax Supaturf's Supa Stadia Eco in time for this season. "The old paint would do about one and a half pitches before you had to go back and re-fill the machine," Bob Skutt continues, "but this new product is so concentrated that we can mark out three or four pitches without thinking about going back to the van to re-load." Graham Dewey maintains that the five litre drums of Supa Stadia Eco are doing the same amount of line marking as the old, twelve and a half litre drums, which contained the council's previous paint. "We're not only saving money and time, but also storage space," he says. "From a health and safety angle the five litre drums are considerably lighter and, therefore easier to use."

Bob Skutt is also happy with the council's new Supaturf Xcel line marking machines, which have been specifically designed for use with Supa Stadia Eco, although they will work well with any Topline paint. "They're easy for the lads to use and easy to clean," he says. "You turn the paint off, rinse the vessel through, take off the brass nozzle and filters and clean them with cleaning fluid. Within ten minutes they're folded up back in the shed. You don't want anything complicated at the end of the day. We're busy enough without that."

Vitax Supaturf's Glen Howard who has been working with Salisbury City Council's Grounds Maintenance team says that because the Xcel has a separate thirty litre water tank as well as a paint vessel, the pump only has to pump clean water as there is no paint passing through it. "This means that the whole system can be easily and thoroughly cleaned," he explains, "and due to the concentration of Supa Stadia Eco the mix is 20/1 instead of the normal 6/1. This represents a substantial monetary saving over a playing season."