0 County Championship: How do you prepare a cricket pitch?

When the first ball of the County Championship season is bowled this Sunday, fans and players alike will look admiringly on the verdant carpet-like playing surfaces 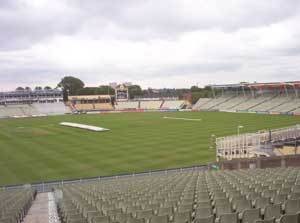 Most of them are unaware that it takes from the day after the final action of last season and all through winter to get ready for this weekend.

But what actually happens to get a cricket pitch ready? BBC Sport spoke to head groundsmen at Warwickshire's Edgbaston, an international Test cricket ground, and Worcestershire's New Road.

Gary Barwell, head groundsman at Warwickshire County Cricket Club, is in charge of getting the Edgbaston pitch ready to play at least 20 Warwickshire matches in all formats, T20 Finals Day as well as England's one-day international against Sri Lanka and the third Test against Pakistan.

"The day after the last day of play in September, a tractor with a scarifier - which is a heavy duty tool with tines - goes into the cricket square," Barwell told BBC Sport.

"We dig it up to a degree and do it in different directions, from 1mm to 10mm deep. This is done to get a nice even level, get rid of organic matter and establish a seed bed.

"When that finishes, it's cut to about 2mm in length so the only thing you see is soil and small white fibres of grass. We aim to get the profile clean, so the soil is genuine soil, and then get a lovely grass coverage over it."

Once the scarifying is finished, the square is brushed before it is completely flooded prior to reseeding and top-dressing, which is when the square starts to develop its distinctive earthy characteristic.

"When seeding, the tractor goes in three or four different directions but the last place we go is in the direction of play because otherwise you will always see an angle," explained Barwell. "Then we top up the ends of the square with top-dressing to level them out as that's where the bowlers bowl from.

"By 2 October last year we were finished, top dressed, fertilised and the square was put to bed for winter within five days of starting."

When the grass has germinated, a process which takes between seven and 14 days, it is monitored, drained and cut over winter until the beginning of the season.

"At the end of November we were ready for verti-draining, which is deep spiking. We went down to nine inches this year. That means the water and air movement can get down there, meaning the pitches hold together better."

Worcestershire's New Road presents a unique problem to the club's head groundsman, Tim Packwood. The ground is on the floodplain of the nearby River Severn and floods most winters.

"We try to get the work done quickly because we have been underwater from the flooding in October before," he said. "The earlier we can get the seed in, the stronger the grasses will be before they go underwater."

Once Packwood and his ground staff have finished preparing the cricket square, the ground is put in to "flood mode", where everything is taken offsite and machinery is sent for service, apart from two rotary mowers. 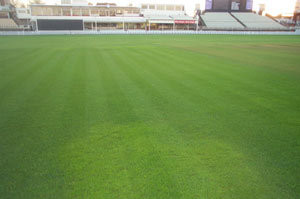 This winter, water entered New Road on New Year's Eve and completely engulfed the ground by 2 January. The flooding finally left the site on 19 January - but there was more misery to come when the ground flooded again just weeks later.

"The first flood didn't leave a great deal of damage on the square so we stayed off for about two weeks," said Packwood. "We had a week of good drying weather and then we were able to get out there. All of the outfield was cut, verti-drained and fertilised in the first week of February.

"Over the weekend we had some torrential rain again and, from Saturday night to Sunday, the river came up 2.2m in 13 hours. By 9 February we were underwater again.

"With every flood you get a bit disheartened but that one was very disheartening because everything was done. The water didn't leave until 17 February."