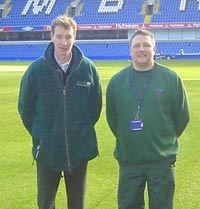 Harvesting of the turf took place on County Turf's 325ha (800 acre) farm at Appleby, near Scunthorpe, over four days in late January with 20 articulated lorry loads of turf being transported direct to west London for immediate laying by specialist installer, Kestrel Golf and Sports.

An interesting feature of the contract was the specialist harvesting equipment used by County Turf during the lifting of the turf. "The equipment, which was made specifically by us for this job, inserted almost 14,000 linear metres of plastic between the turf layers as the rolls were being formed," explained County Turf's managing director, Andy Fraser. "The result kept the grass sward within each roll in perfect condition both during transport and while the Stamford Bridge pitch was being re-laid."