0 Create an amazing home for nature

We live in a crowded country, where green space is at a premium and our wildlife is being squeezed. In fact, a UK report, The State of Nature, published last year revealed that over 60% of 3,000 species studied had declined since the 1950s. Some were even found to be in danger of becoming locally extinct, and disappearing from our shores altogether.

Species in trouble aren't always obscure beetles or rare orchids, but include wildlife we're probably all familiar with; birds like yellowhammers and song thrushes. Insect species, including some ladybirds, bees and butterflies, are declining, hedgehog numbers have been steadily dropping, and studies show that, in sixteen UK counties, one species of plant becomes extinct every year.

In an effort to try and counter these declines, the RSPB launched a major new campaign in 2013 intended to help people create 'Homes for Nature' where they live, work and play. The idea is a simple one; connecting people with wildlife and encouraging them to undertake small tasks, such as putting up a nest box, or growing some wildflowers. But it also stretches to land managers looking for opportunities to create and care for the habitats that are so vital for the wildlife that is in decline. 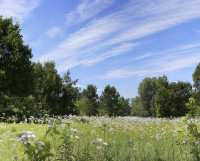 After all, it's not just domestic gardens that can act as mini nature reserves and lifelines for our diminishing wildlife. Schools, parks, and recreational areas can all play their part. And so can golf courses; many already do.

RSPB spokesperson Sarah Woods, said; "Golf courses used to have a bit of a bad reputation in environmental terms. They were often seen as bleak grass monocultures, with an over-dependence on chemical fertilisers and precious little biodiversity. But, on closer inspection, many have features that benefit wildlife. Some support priority habitats like heathland and chalk grassland, and many are working hard to reduce reliance on water."

"More and more, golf course managers are considering wildlife in their plans, putting in native trees, shrubs and flowers and, in some cases, creating, for example, wildflower meadows and reedbeds. Many have also started to reduce their dependence on harmful pesticides and are instead looking to attract pollinating insects like bees and butterflies. And, where there are insects, birds and bats are sure to follow."

All this work for nature doesn't just benefit nature of course. The experience of watching wildlife is, for some, a big part of the pleasure of a sedate round of golf. A blackbird singing its heart out from an old tree lifts the spirits, even on the gloomiest of days (and during the gloomiest of rounds), and catching sight of a kestrel hovering statically overhead, or a hedgehog snuffling its way around the rough, is a tantalising glimpse of the wild.

A few courses can even hope to support real rarities, some which even arrive with no encouragement. In 2009, one golf course on Mull hosted a pair of white tailed eagles which nested right next to the fairway. The family, whose two chicks were named pitch and putt, proved extremely popular with visitors and the course became known, for one season anyway, as the one place where an eagle was always guaranteed.

Sarah continued; "For a lot of golfers, wildlife is absolutely an added bonus to playing a round. A recent survey found that 70% of golfers would like to see environmental initiatives at their club, and over half of them specifically preferred to see birds and wildlife whilst playing. 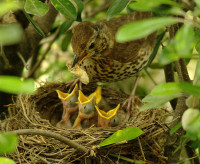 Being surrounded by the sight and sounds of birds, insects, mammals and plants just adds to the experience. It also helps to connect people with the natural world, exciting their interest, and hopefully encouraging them to think about ways they could help support it as well."

But in addition to providing enjoyment for golfers, courses managed with wildlife in mind can support dwindling species, providing living and feeding areas for hundreds, if not thousands, of small creatures.

Sarah said; "If you look at golf courses across the UK as a whole, there's about 140,000 hectares of out-of-play areas. That's actually about the same size as the area covered by all the RSPB's reserves in the UK. There's so much potential for these spaces to become wildlife havens; some will need work to recreate the heath or wetlands that the wildlife needs, but the rewards are worth it. Sometimes, just reducing the mowing regime can be enough to help flowers set seed and allow skylarks to breed successfully."

"Many courses are doing this already and providing a boost to species like woodlarks, grass snakes and hedgehogs. Meanwhile, there are real opportunities to make a difference for some of our most threatened species. Turtle doves, which have declined by 90% in forty years, need a combination of tall scrub or hedges and seed rich grassland, meanwhile the willow tit, which has suffered a similar fate, needs areas of young willow scrub. Both of these are relatively easy to provide on out-of-play areas and neither have to be large."

"We've heard lots of inspiring stories from people keen to help and producing some fabulous areas for wildlife. Water features, in particular, can be very successful, proving a home for frogs, toads, ducks, and dragonflies, as well as creating somewhere pleasant for golfers to look at - and to help them get over the disappointment of watching their ball disappear into the deep end!"

"Woodland, copses of trees and hedgerows can provide important food and shelter; meadows and open areas can all support different wildlife; whilst reducing the usage of artificial pesticides and fertilisers, and excessive water use, can all have wider environmental benefits. 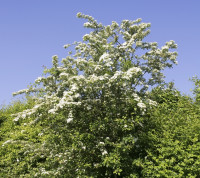 Erecting nestboxes, which are available in all shapes and sizes, can also help targeted species, and piles of dead wood left over the winter can assist hibernating insects, such as ladybirds."

"Often, with habitat management on golf courses, it's just a case of doing a bit less and by working with the grain of nature to produce the best results, which doesn't impose a cost. More ambitious projects will cost more, but golf courses are eligible for grants from the country conservation agencies."

Sarah concludes; "Golf courses can support blocks of trees, old hedgerows, colourful wildflower meadows and open hunting grounds. They have the potential to be an amazing resource for our wildlife, which really is struggling to survive in the modern world. With just a little bit of investigation and thought, golf course managers can create an amazing home for nature. Something their members are sure to approve of."

What your club can do

• Get a copy of 'Birds and golf courses: a guide to habitat management', jointly published by the R&A and RSPB here http://shop.randa.org/index.cfm?action=productdetail&productID=187&deptid=6

• Allow grass to grow and plants like ivy to grow on trees to provide better food, cover and foraging territory for insects, birds and bats

• Remove non-native shrubs and trees and plant native species, such as hazel and hawthorn, to encourage indigenous wildlife to thrive

• Only cut out-of-play grass areas and hedges and shrubs once a year to allow wildflowers, berries and fruits to flourish and attract butterflies and bees

• Reduce the amount of water, pesticides and fertilisers used