0 Cricket Groundsman of the Year Award

Cricket Groundsman of the Year 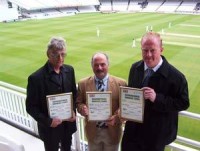 Cricket World and Pitchcare are pleased to announce an even bigger Cricket Groundsman Awards for 2004.

The Competition is designed to raise the interest and awareness of Groundsmanship and to encourage and promote Groundsmen, in Cricket, at all levels.

The Competition Board, comprising of Cricket World and Pitchcare invite entries up until the end of October 2004 from players, administrators, umpires and local authorities to nominate a Ground/Groundsman for an Award.

The Awards can be nominated for the outstanding quality of the playing surface, general upkeep of the ground, Longevity of Service or an 'against all odds' type of Achievement Award. The Competition Board will be judging the final selection of nominated entries in the last week of November and the first week of December. The winners will be invited to attend a Presentation, at Lord's Cricket Ground, in 2005

Or follow this link and fill in the form below for 2004 entry:

The Awards for Groundsmen, outside of the County circuit, will be judged in three categories