0 Crown Green Bowls back in the TV limelight

This week's Mens Handicap Finals at the traditional home of Crown Green Bowls, the Waterloo Hotel in Blackpool, was an important milestone for the sport 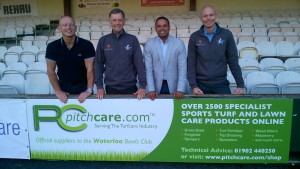 There was live coverage of the tournament for the first time in 26 years. ITV4 covered the final two days, with highlight programmes summarising the days' events.

The tournament was sponsored by the Co-operative Funeralcare. British Crown Green Bowling Association Commercial Officer, Mel Evans MBE, said the coverage had been a huge success, "This is the best news the sport has had for many years, and hopefully this will attract newcomers to crown green bowls."

The overall winner was Greg Smith, from Birmingham, who made an impressive comeback to overhaul Ross Dunkley 21-19.