A number of the UK trade press recently visited the factory of Dennis and SISIS in Derby for an exclusive behind the scenes look at the new Dennis PRO 34R rotary mower and an insight into the future vision and continual investment of the companies. 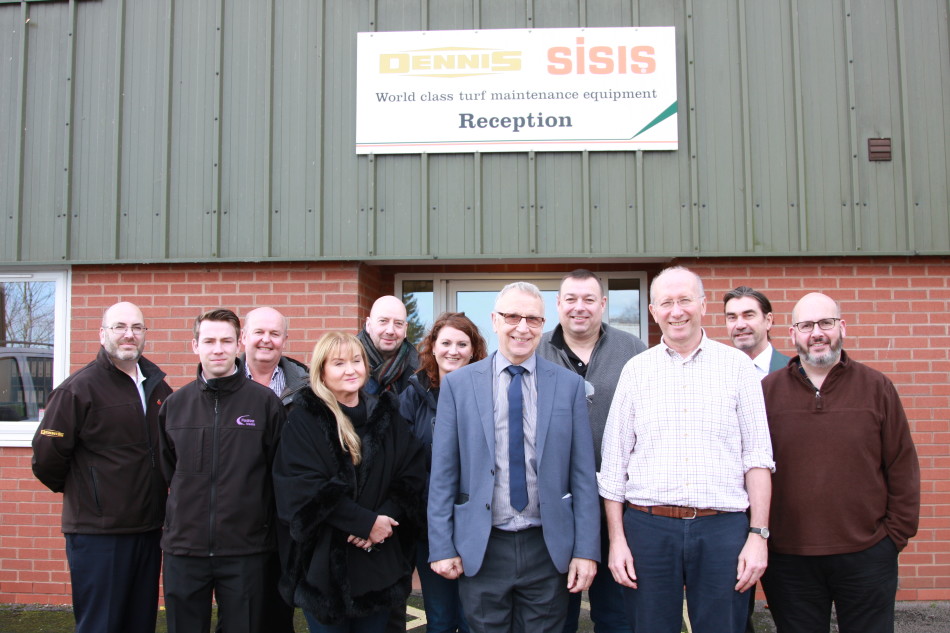 Managing Director Ian Howard and Sales & Marketing Manager Roger Moore extended a warm welcome before giving an insight into current and future markets and products, before discussing the recent results of the SISIS Javelin Aer-Aid STRI (Sports Turf Research Institute) trials which included a CGI animation of what happens under the surface while using the tractor mounted aerator over a 30-day period.

Following extensive trials conducted by the STRI, it has been concluded that the SISIS Javelin Aer-Aid would be an essential tool within any integrated turf management programme.

Over a four-month period, extensive STRI trials led by Dr Christian Spring were carried out at the world's leading sports turf consultancy's headquarters in Bingley, West Yorkshire. The research saw three trial plots set-up in which one area examined the effects of the SISIS Javelin Aer-Aid with air injection, one with the Aer-Aid without air injection, while the other plot was left un-treated. In particular, Christian and his team of researchers were looking at how and if the Javelin Aer-Aid had an effect on the hardness of the turf, root depth, water infiltration and disease.

Attendees were then given a first-glimpse of the Dennis PRO 34R rotary mower before it goes into full production in early 2018. The PRO 34R is a 34" (860mm) rotary mower designed to help groundsmen achieve an aesthetically pleasing appearance and desired playing surface and is ideal for sports pitches.

The professional rotary mower has been designed and developed with feedback from groundsmen over the past 18 months ahead of the official launch.

Ian Howard then gave an insightful presentation of the company's sales over the past seven years, which has increased five-fold over that period, before discussing the future vision of the group of companies and products which may appear in the distinctive 'Dennis Green' and 'SISIS Orange' colours over the coming years.

The group were then given a 'behind the scenes' look at the All British Precision factory where components for Dennis and SISIS machines are manufactured. This includes the recent investment of over £400,000 in new fully automated manufacturing machines. This was followed by a tour of the Dennis and SISIS production and assembly lines which now includes a new in-house paint plant - yet more proof of the continual investment into the British manufacturer while ensuring that quality control is of the highest standard.

Factory tour over and it was back into the office for lunch followed by a question and answer session and thanks from both Ian Howard and Roger Moore.

"The event was hailed a great success by all," commented Ian Howard. "It is always nice to open our doors and give the trade press an insight into exactly what goes into bringing a new product to market - from market research, design, production and extensive field tests with groundsmen and greenkeepers. It also gives them the chance to see our hard-working members of the team which shows the dedication and proudness which you do not always get a chance to see."

The company is proud to be flying the flag for the UK turf care industry.

Further information about the range of maintenance products available can be found by visiting www.dennisuk.com / www.sisis.com.