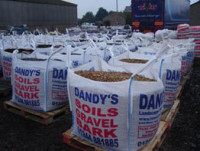 John Carter, Dandy's UK Sales Manager, has secured an order of over 6,000 tonnes of our quality Lawnmix Topsoil. This is already being delivered to an undisclosed Golf Course in South Wales.

The order, which is the largest in Dandy's 179 year trading history, was secured on recent trials and independent tests of our topsoils by the buyers themselves. Director of Dandys (Chester) Ltd, Adam Dandy, said, "Since employing John as my UK Sales Manager earlier this year, he has won a number of large contracts for us locally and nationally. John is currently working hard to secure a contract to supply over 18,000 tonnes of our lawnmix topsoil to a site in London for the forthcoming Olympic Games. On behalf of all the Directors and staff at Dandy's we'd like to thank John for a job well done!"

The Chester based company was started back in 1826 when the current directors' Great Grandfather opened a fruit and veg stall in the Old Chester Market. Dandy's soon became known for selling the best quality fruit and veg in Chester supplying hotels such as The Grosvenor Hotel, The Blossoms and The Queens Hotel, as well as many others. Since then Dandy's has gone from strength to strength diversifying from the fruit and veg market to general haulage and, more recently, has become one of the UK's largest suppliers of topsoils & landscape supplies. Dandy's is now famous for their quality topsoils ,Lawnmix & Bordermix, which are sent directly from our Chester depot to places as far away as the Highlands of Scotland.

Dandy's Quality Topsoil is available from the Pitchcare Shop