Who are you? David Bateman (31) Assistant Greenkeeper at West Wilts Golf Club, Groundsman at Warminster Cricket Club and Wicketkeeper/Batsman for Warminster 1sts. 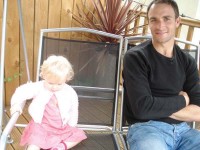 Status? Live with Emma, my girlfriend of six years. We have two daughters, Grace who is nearly 3 and Daisy who is 3 months old.

Who's your hero and why? I have many sporting heros. I would say Joe Calzaghe, one of the all time greats, he has everything in a boxer, and he's Welsh! Most of my family are Welsh and i like to support the sportsmen and women from Wales, especially the rugby!

What is your dream holiday? If i could cope with the altitude, a trek around the Himalaya, hoping to see Everest!

What annoys you the most? Rude golfers,who don't pass the time of day when you have acknowledged them! Golfers that play a shot when you haven't got out of the way! Batsmen who take ages scratching and digging holes when taking guard!

What would you change about yourself? Emma will say less stubborn! Also to be able to hear better as I have damaged my hearing over the years through DJing - and being around ride-on mowers since the age of 12 hasn't helped!

Who wouldn't you like to be? Any Football referee or linesman! The stick they get - you couldn't pay me enough!

Favourite record, and why? I have many favourites through being a house music DJ. If I have to pick one it would have to be the Ibiza Classic "Needing You" by David Morales. Probably not a record many readers would have heard of but one I always play if I get a 'gig' anywhere!

Who would you choose to spend a romantic evening with? If not Emma then Keely Hazell of Page 3 fame ... for obvious reasons!

If you won the lottery, what is the first thing you would do? Make sure the family are okay, then embark on a big drinking tour around the world with my mates!

If you were to describe yourself as a musical instrument, what would you be? A Technics 1210 record player! Reliable and does the job!

What's the best advice you have ever been given? My dad, being an ex Army drill sergeant, has given me loads over the years, and also a lot of stick too! He always tells me to keep working hard and try your best at everything and no one can ask anymore!

What's your favourite smell? The fumes from my roller. it means the cricket season is here!

What three words would you use to describe yourself? Laid-back, honest and hardworking!

What talent would you like to have? To be able to play quick bowling better! I'm okay against spin or medium.

What makes you angry? Umpires that just "trigger" and don't think about decisions! Theres a few in our league!

What law/legislation would you like to see introduced? The death penalty for certain crimes. Rotting in jail is too good for some!