Where once stood a croquet lawn and tennis courts, the Broadway Bowling Club opened its doors in 1919. It sits in an idyllic location in beautifully maintained grounds with scenic views towards the Cotswold escarpment and the Broadway tower; a 'Saxon Tower' folly that was the brainchild of 18th Century landscape designer 'Capability Brown'. The gently sloping banks of herbaceous flower borders and hedging change through the seasons and come days when the weather halts play, the club's pavilion offers a pool table and an indoor skittle alley for members to enjoy. 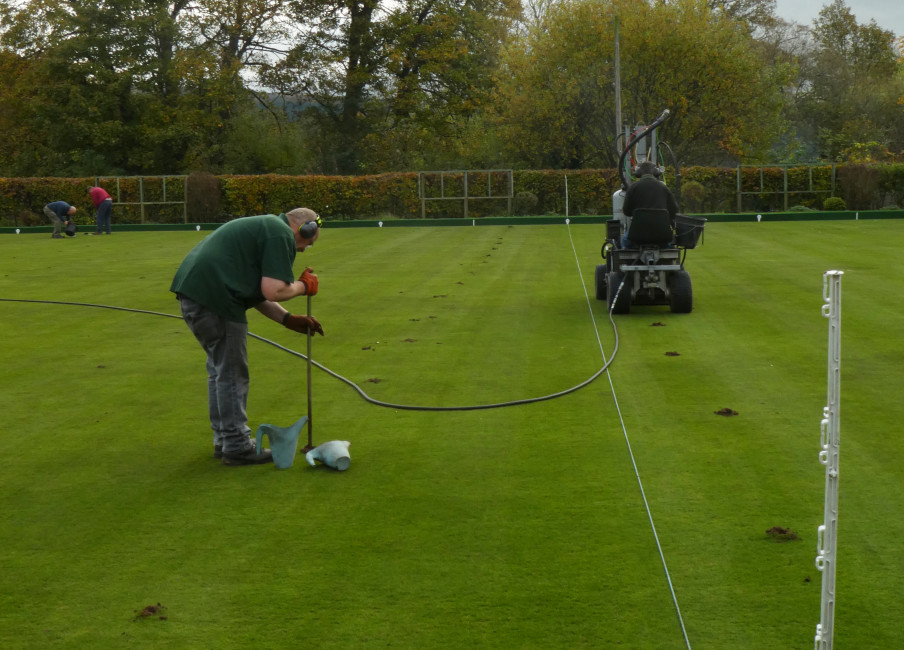 It was during 2021 the weather brought matters to a head for Dennis Hall, Broadway's Greenkeeper of ten years. Increasingly, the green was suffering from standing water after heavy rain, with one area getting progressively worse. Even in dry periods, it was noted the ground was frequently mushy when the mower went through the area.

Avonmore Associates, the highly respected South Warwickshire sports grounds construction and maintenance company, regularly maintain the green with a regime of spiking and aeration. They suspected a deeper problem. As happens with many older bowling greens, the sheer volume of play over the years, combined with the substrate of the original construction, leads to compaction at a depth not reached by normal aeration. In Broadway's case, there are mixed areas of stone and clay with insufficient release of standing water built up over time.

Avonmore suggested using Terrain Aeration, with whom they have worked on a number of projects, to bring in their Terralift machine to provide one-metre-deep aeration. At this depth, the ground is usually so compacted it requires fracturing to open up fissures and allow drainage. Terrain Aeration's Terralift system works on the principle of hammering a hollow probe through the soil using a JCB road breaker gun, and compressed air is released up to 20Bar (280psi). At the end of the air blast, they inject dried seaweed, which sticks to the fissure walls. This expands and contracts with the moisture in the soil to keep the area breathing. Working to a grid with approximately two metre spacings allows the Terralift to create interlinked cracks and fissures deep underground to carry away the water. The 1.5-inch probe holes on the green are backfilled with Lytag aggregate and covered with topsoil, making it playable almost immediately.

The work at the Broadway Bowling Club was carried out in November 2021 and Dennis Hall reports that they have had several periods of heavy downpour and the deep aeration has done the trick with no standing water to halt play.