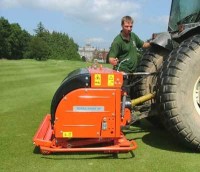 It's also a testament to the dedication of Resort Superintendent Joe O'Flaherty and his greenkeeping team who manage the Robert Trent Jones designed 7,125 yards championship course set in 840 acres of rolling parkland and formal gardens within the 19th Century estate near Limerick.

In 1999 Joe O' Flaherty designed and implemented a drainage and top-dressing regime to ensure that the course was available all year round. The success of this was in no small way attributed to the deep aeration programme that was undertaken, initially using a contractor then followed by the purchase of a Wiedenmann Speedlink P160 aerator.

"We are on a heavy clay base here", said Alan MacDonnell, Assistant Resort Superintendent, "and Joe's plan involved very intensive top dressing which has since created a 12.5 cm sandy rootzone. This, coupled with deep aeration to open up the clay base, has proved really effective and means that we are playable virtually every day of the year."

The 8-year old Speedlink P160 has served the club admirably, but has recently been replaced with a Terra Spike XF, the very latest fast deep aerator from Wiedenmann UK. Purchased from local dealer, Seamus Weldon of Killarney, the new machine is up to three times faster than conventional machines and has provided significant benefits in a short timeframe.

"The speed and quality of finish is superb", continued Alan MacDonnell, "With the old P160 we could aerate one fairway a day, now we can get round the whole course in just 3½ days. The VibraStop anti-vibration system is excellent and we've gone for the hydraulic depth control option which makes it easy to adjust if the operator hits a hard area. It also frees up valuable time for other jobs."

The Adare Golf Course opened in 1995 and features rock-walled streams, undulating putting surfaces with the Jones signature clover leaf bunkers. A 14 acre lake dominates the front nine holes while the back nine is routed through wooded parkland. The River Maigue meanders through the course creating additional challenges.

In 2000 the course hosted the inaugural Ladies World Cup of Golf, won by the Swedish pairing of Sophie Gustafson and Carin Hoch. In 2002 it was the venue for the A.I.B Irish Seniors Open, won by Seigi Ebihara and hosted the event again in 2003 and 2004. It was also the venue for the 2003 Smurfit Irish P.G.A Championship, which was won by Paul McGinley. In July, Adare was the venue for the JP McManus Pro-AM, which attracted top golfers from around the globe, with the eventual winner being Padraig Harrington.