John Deere will continue as a title sponsor of professional golf to 2023 as a result of a seven-year extension announced by Deere & Company, the PGA TOUR and the John Deere Classic tournament 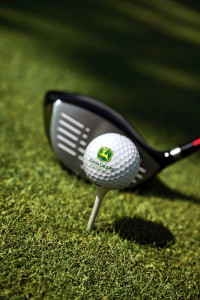 The agreement includes sponsorship of the John Deere Classic and multiple designations for John Deere in the TOUR's Official Marketing Partner programme.

In addition, Field noted, hundreds of community organisations have benefited from millions of dollars in contributions made through the John Deere Classic, and the tournament has had substantial economic impact on the Quad City community where it is held.

The agreement was announced during a news conference at the Deere & Company world headquarters in Moline two days before tournament play was due to begin at the 2015 John Deere Classic, which is held at the TPC Deere Run course in Illinois. PGA TOUR deputy commissioner Jay Monahan joined Field to announce the new deal that runs to 2023, taking effect when the current six-year agreement expires at the end of 2016. Financial details were not disclosed.

"When we first entered a marketing agreement with John Deere, the PGA TOUR was confident this would be an exceptional association," Monahan said. "The two organisations have similar corporate values and we are pleased with the direction this relationship has taken. We're naturally delighted to announce a continuation of this valued collaboration up to 2023."

"The board of directors for the John Deere Classic are thankful for the tremendous support provided by Deere & Company," said tournament director Clair Peterson. "We want to provide not only a great sports competition but also an event which the community can be proud of, be involved in, gain benefit from and support as a spectator or volunteer."

A recent study by Deere estimated the impact of the John Deere Classic is worth approximately $54 million annually to the Quad City area economy. This estimate includes money spent on travel, food and accommodation by visitors, the purchase of goods and services to support the tournament, and other purchasing that would not take place if the tournament did not exist.