If there is one rule of thumb I have learned from working with natural turf it is that we can only ever improve the performance of our playing surfaces if we know what we are dealing with. We have to have a clear objective of what we want to achieve.

By this I mean we need to understand what condition our facilities are in at any given point in time. Once we know this we can then begin to make improvements.

Therefore, we need a set of objectives to aspire to and the ability to measure the condition of the facility at any one time to clarify our position. In recent years we have seen the introduction of Performance Quality Standards (PQS) to evaluate turf and soil quality.

Most of the sports governing bodies, in line with other institutions, are now recommending the use of PQS assessments as a tool to help improve pitch quality and to enable clubs to obtain relevant funding for pitch improvements

The English and Wales Cricket Board (ECB) have now developed a mechanism whereby clubs of all standards can acquire the services of an accredited ECB Pitch Advisor to assess their grounds.

Performance Quality Standards are a means of defining the quality of a product. For cricket facilities there are three clearly definable areas, of which the most important is the pitch followed by the square and the outfield.

However, the playing standards of these essential surfaces are determined by the quality and suitability of the components; the soils, 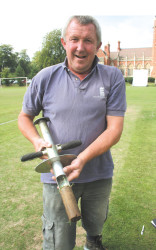 The quality standards have to be adjusted according to the time of year and, therefore, should be regarded, not only as standards of provision but also as objectives to aim for at specific times of the year.

Performance Quality Standards do not indicate how a job should be done, they specify quality criteria to which the product must conform on completion or during service.

In essence, by the mere fact that you are measuring and recording information about the condition of your facility enables you to monitor its performance and address any problems that may be identified during the inspections. The whole process is not about trying to lay blame, it is fundamentally about improvement and ensuring the facility is fit for the level of play required.

Within the PQS there are three categories of measurement that relate to the overall quality of a facility:

1. The physical structure - the profile make up
2. The presentational quality - the visual aspect
3. The playing quality the performance ratings

The ECB advisor will generally use five basic items of equipment to make measured assessments:

Once on site the advisor will carry out a series of measurements to collate data for the report. As with any written protocols and reports they often seem intimidating, however, it is not until you see the PQS in action you realise how simple and effective the whole process is. And, more importantly, see how relevant it is to your understanding and decision-making when maintaining the surface.

So, to find out how easy the process is I met up with ECB Pitch advisor Geoff Calcott from the Warwickshire Groundsmen Association who was conducting a PQS assessment for Attock Cricket Club in Birmingham, who play at Moseley School.

Ball bounce and the ASSB (motty test) were not required for this assessment.

Geoff has over twenty-five years experience as a Groundsman and has been an ECB pitch advisor since the scheme started some three years ago. He was keen to emphasise that the whole purpose of the assessment is to improve facilities and people's understanding of what is required to deliver safe and consistent playing surfaces.

At the club, Geoff took time to clearly define his role as the assessor and, during the testing, he explained his findings to the clubs officials and Groundsman, together with any recommendations that became apparent during his visit.

His first task was to establish some historical information about the ground:

• How long had the club been there?
• How many teams/fixtures are played?
• Resources available (machinery/staff)?
• What loam are they using?
• Age of the square?
• End of season renovations?

The club had been using the ground since 1994 and have to share the facility with the school. Between them they are playing close to 100 games of cricket per season, on a square that only has twelve strips and one artificial wicket Geoff's next task was to get an overall view of the square and its condition, first impressions say a lot about facilities.

If it is well presented, has an even colour and set out correctly it is more likely to score well on the PQS assessment.

The first series of tests involved the assessment of the herbage cover on the square, measuring in detail the amount of desirable grasses, bare soil and weed species seen at the time of the visit.

This is achieved by using a 100 square quadrant that is placed on the surface to record percentages. This was repeated a number of times to get an average score. Geoff is looking for desirable grasses, usually dwarf rye grasses, while, at the same time, measuring the amount of Poa Annua, the percentage of bare soil and weed infestation seen in the square.

The second round of tests involved taking a series of core samples (usually 4-6) that are representative of the soil profile down to a depth of 150mm. From these samples Geoff is able to reveal over twenty years of activity seen on the square. The core samples are taken from the edge of a pitch, so as not to interfere with its performance.

The thatch/fibre layer on the square was 8 to 10 mm deep. Geoff explained what thatch was and how to deal with it, which led on to a conversation about seasonal maintenance operations and end of season renovations undertaken by the club.

He explained how important it is to keep thatch levels down to around 2mm. Often, insufficient thatch is removed during end of season renovations, largely due to the fact that the scarifier is not rugged enough to deal with the problem or, simply, the machine is not set to penetrate deep enough. Ideally, at least three passes should be made on each square with the first pass down the line of play and the following two passes made at 15 degree angles from each corner of the pitch.

Geoff explained that thatch can be reduced during the season by effective verti-cutting on a fortnightly basis, removing unwanted vegetation whilst making sure the blades do not disturb the soil surface.

Next, Geoff looked for the consistency of soil type, taking note of colour and texture of the sample, together with any evidence of layering or root breaks. He then checked the sample for root density and depth of rooting, the more root growth the stronger the soil can be bound together.

Core samples will often provide evidence of whether the square has been aerated effectively or not. It is important to encourage root growth below 100mm
to obtain favourable results.

Effective aeration can only be achieved with the correct methods and optimum timing of operations. It is unlikely you will get deep penetration until there is significant soil moisture in the ground, usually from late October onwards. The norm is to aerate between three and five times over a three month period achieving a depth of not less than 100mm. It is not recommended to undertake deep aeration works after January.

Geoff then produced a 3 metre long straight edge to check for surface evenness and gradient, testing across the line of play and with the line of play.
For evenness the straight edge is placed on the surface with Geoff measuring the depth of any gaps seen under the bar, gaps measuring more than 10mm need addressing (see PQS form for acceptable tolerances based on high, medium and basic standards).

For gradient the same straight edge is placed on the pitch, with a spirit level rested on the bar. The height between the bar and the pitch when the reading is level indicates the gradient.

The incidence of pests and disease can also be monitored, looking for signs of plant stress, evidence of pest activity such as worm casts, rabbit droppings or insect larvae in the soil profile.

During the whole PQS assessment Geoff kept the club officials informed of his decisions and scores for each and every test, along with explaining, in detail, ways to improve any identified deficiencies. The whole process took about three hours, with a final report to be written to confirm scores and with recommendations of work needed to meet their playing standard.

Geoff also pointed out the importance of soil testing to monitor soil pH, organic matter content and nutrient status. Understanding these key indicators will go a long way towards tailoring the correct cultural practices and making the right choice of products, such as fertilisers.

The role of the ECB Pitch Advisors is to help clubs improve the level of their facilities with the aim of ensuring that the facilities they maintain are essentially meeting the targets set by the sports governing body and, more importantly, providing a challenging but safe and consistent surface for cricket at their chosen level of play.

The ECB Pitch Advisory Scheme is funded by Sport England and the ECB, and represents the first governing body to address the issue of groundsmanship, in particular at recreational/non-professional levels. The scheme has resulted in the placement to date of forty-five County Pitch Advisors who are now serving clubs across England and Wales.

The ECB TS4 booklet, written by Chris Wood, is also a valuable resource that explains the role of PQS assessments along with detailed information on cricket pitch construction and maintenance practices for all levels of the game. It can be downloaded from the ECB website or obtained in hard copy format.
See website for details: www.ecb.co.uk