0 Dennis Mowers: “A pedigree no-one can argue with” 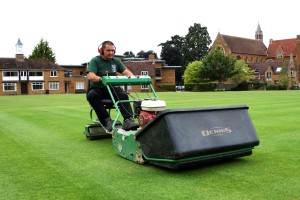 Glenn Davies, grounds manager at Bloxham School in Oxfordshire has claimed that he chooses Dennis because of the "strength, history, quality and durability" of the mowers.

Set in the beautiful countryside of Oxfordshire, Bloxham School is an independent co-educational day and boarding school for students aged 11-18. Although the school is best known for its academic success, Bloxham also boasts a superb sporting programme which is complimented by first-class facilities.

Glenn oversees the maintenance of around 40 acres of sports fields which includes seven rugby pitches, four cricket squares, one football pitch, one hockey pitch and two grass tennis courts. With over 400 pupils attending the school and playing sport on a regular basis, as well as the facilities being used by local and county sporting teams - it is safe to say that the pitches have a high amount of usage.

Helping Glenn and his team keep on-top of such heavy usage is the Dennis G860 cylinder mower, which they use on a variety of different sports surfaces.

"The Dennis G860 is a great bit of kit," says Glenn. "We use it for cutting the cricket squares, for cutting the grass hockey pitches, both rugby and football pitches, and when we have county fixtures or cup games we will box off the cricket outfields because this gives it a much faster, truer surface so the ball will carry quicker."

"In my opinion the G860 is one of the best machines you can get and with the interchangeable cassette system, it is extremely versatile."

As Glenn says, the Dennis G860 features an interchangeable cassette system, and with a simple one minute changeover, users have the option of fitting eleven different types of heads including scarifiers, verticutters, brushes, spikers, and slitters as well as six or eight bladed cutting cylinders.

"In terms of the cassettes, we are particularly impressed with the scarifier, and we will use it lightly through the season so we can make sure we keep the thatch down to a minimum and the grass stood upright."

"The brush is also a very useful cassette to have. We'll use this throughout the season to keep the squares nice and clean, but we will also put the brush in after we've done a deep scarify in the autumn and the spring. This drags up all the grass the machines haven't been able to pick up and it will also pick up all the debris and take it away. So when you put your top dressing down, you have got a clean, flat base to start with."

"You just can't beat the Dennis machines," says Glenn. "There are other machines on the market but Dennis has got a pedigree that nobody can argue with - for me, it speaks of strength, history and durability. They've been around for a long time, they always deliver, and most groundsmen you talk to will favour a Dennis above anything else."