Both the Dennis G860 and the Dennis Premier play an integral role in maintaining Stoke City FC's bet365 Stadium pitch and training ground, according to grounds manager Andy Jackson. 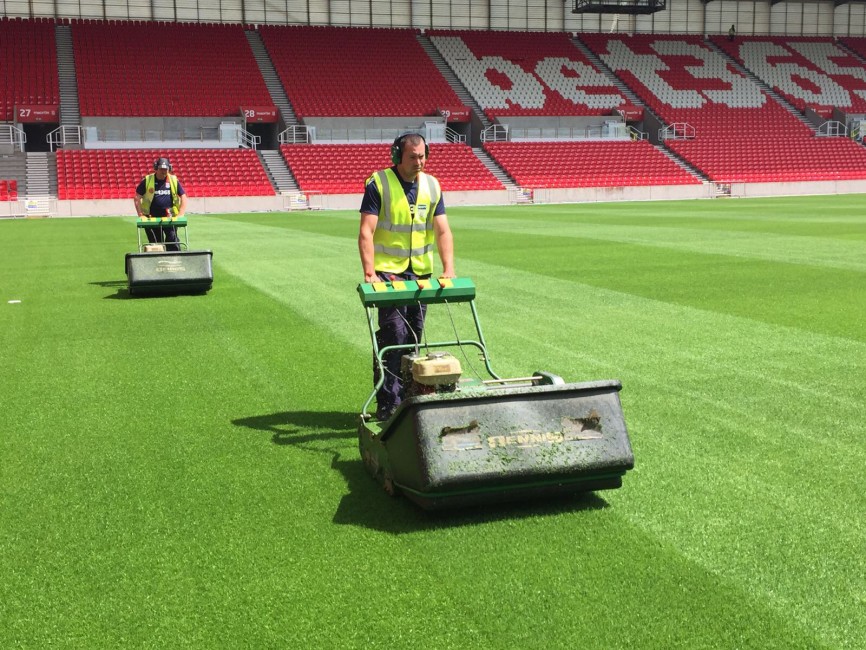 Having joined the club as an apprentice on a YTS scheme, Andy Jackson now oversees all of Stoke City FC's grounds maintenance - which includes the pitch at the bet365 Stadium and the multitude of facilities at the Clayton Wood training ground. Andy has twelve members of staff across the two sites and they work together as one team. He insists that no-one should be dedicated to one specific site, claiming that it enables them to deal with every situation and ensures that not one person is limited to having knowledge of just one site.

"Personally I think this method works for us," says Andy. "It provides the opportunity to work in different environments which improves their skill set and it also takes out the mundane task of just looking at one site all the time."

"Obviously it is important that we've got the correct staff in place but it is absolutely essential that we have the right machinery and that everything is reliable."

Andy has a fleet of Dennis mowers which sees four Premier's and three G860's based at the training ground, while the stadium has two G860's. 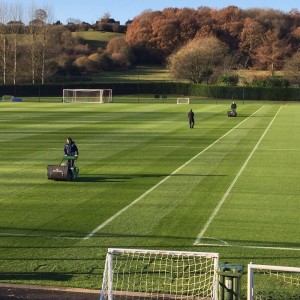 "I feel that the Premier's do a very good job on the soil based pitches," he says. "We also use them on the Desso Grassmaster pitches if we need to firm them up a little bit - especially when we've been growing pitches in. We use the Premier in conjunction with the G860 and the two machines give us plenty of options."

Fitted with either a powerful Honda Petrol or Kubota diesel engine, the Dennis Premier is available in 30" and 36" cutting widths. A three section rear roller and steering brakes make it easy to manoeuvre giving an excellent stripe pattern and rolling characteristics. Complete with a large diameter front roller with adjustable scraper, for precise height of cut control, the machine is easy to adjust on both sides with the use of a single spanner.

Equally impressive is the G860 which features an interchangeable cassette system, giving options to fit a variety of heads including scarifiers, verticutters, brushes, spikers, and slitters as well as 6, 8 or 11 bladed cutter cassettes. The operator can use the mower for a number of tasks with a simple one-minute changeover of cassettes.

"We have the Verti-Cutter cassette and the Brush as well as the cutting cassette," says Andy. "We use the Verti-Cutter cassette at the stadium and at the training ground and use it quite intensively in April, May and then again in September or October. It's a very effective tool and I find that we get really good results from using it after a match."

The G860, weighing in at just 166kg, is renowned for its ease of use and groundsmen from grass roots to professional level have praised the machine for not only providing first-class results but also for its comfort.

"They are so easy to use - I like the fact they've got an open box at the front so I'm in control of everything I'm doing. We string cut so I can see the string, I can see the roller, I can see the blade, I can see the box in front of me - everything is visible at all times. The other thing for me is the setting - the adjustment of the height of cut is very simple yet effective. They also have low vibration levels which is great if you are using them for a long time like we do."

"Each G860 probably does a distance each week from Stoke to Manchester and back. For a mower that is some mileage - they just keep going and going and reliability is key for me."

"The most important thing is that the players have a good surface to play on every week - that the pitch is cut at the right height and that it is nice and flat. They just want the pitch to be 100% for every game and Dennis help us massively in doing that."

"To be honest I don't think I'd even look at a machine other than a Dennis. I get tremendous back-up from them and they are forward thinking. Personally I think they are the world's best company in supplying mowers for groundsmen."