What has been a tough two years for everyone has seen a huge rise in the number of people taking to their gardens with more time at home. The Allett lawn stripes competition is in its ninth year with entries welcome regardless of the size of lawn or where they are in the world. Homeowners are encouraged to use their lawns to design the most eye-catching designs and show off the craftsmanship and dedication that goes into grass maintenance. The standard of this year's entries has again been incredible, say Allett, with the top six entries coming from England, Scotland, Northern Ireland and the USA. This year's judge was Andy Wain, Head Gardener at Euridge Manor and last year's winner. An internal vote was done by a specialist Allett panel with the top six entries forwarded to Andy to pick his overall winner. First place went to Dennis West of Provo, Utah, USA, who was sixth in last year's competition. The judges' comment were: "This is a really clever design. The way the pattern flows around the house is fantastic - Incorporating both stripes and different cutting heights has come together to create a really outstanding piece of art. Congratulations! Beautiful'' 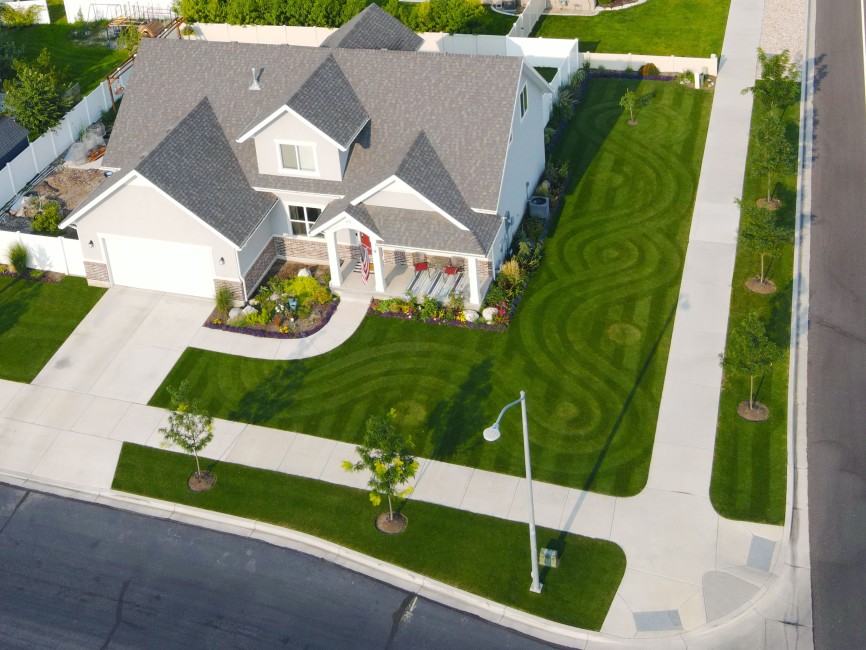 Dennis works from home as an instructional designer for a telecommunications company headquartered in Maryland, and worked as a graphic designer for many years. He has a BFA in Animation and an MS in Instructional Psychology and Technology. A little over three years ago, he moved to a newly built house that had no landscaping and over the next two years, he set to installing sprinklers and managing the hydroseeded lawn. He watched many YouTube videos on DIY lawncare and became more and more impressed by what he saw could be accomplished in a lawn. In March 2020 he purchased an Allett Kensington 20H and began raking, sand levelling and conditioning the lawn to grow at a shorter length. For this year's competition, he tried something different from his first entry but decided it wasn't good enough. Following more experimentation, he saw online some Zen garden patterns and felt that was a good place to start.

To design the pattern, he measured out the lawn and drew an outline in Adobe Illustrator. Accurate measurements were key to scaling down the lawn to make line widths equal to the 20-inch width of cut on the mower. Then, to get the pattern on the lawn, Dennis used a string and stakes to make the curves. He established the pattern over a few weeks using different heights of cut but felt it lacked something, so he experimented by adding directional stripes, but they obstructed the main design. To bring it all together, he used the mower's brush cartridge, which helped the design stand out as if it was above the directional stripes. An additional challenge was that Utah is a high elevation desert, so accurately measuring and adjusting the watering was important.

"I am so honoured and humbled by being chosen as the winner this year," says Dennis, "so many great entries were finalists, I really had some great competition. My family, friends, and neighbours are all so supportive and pleased by this honour, it's really a great pleasure!"

Dennis now becomes the proud owner of an Allett Liberty 43 battery powered cylinder mower alongside the ALLETT Complete Lawn Care System of six interchangeable cartridges comprising an aerator, a scarifier, a lawn brush, a dethatcher, a verticutter and a 10-blade cartridge together with two cartridge stands.

Allett Mowers is a leading manufacturer of cylinder, walk-behind mowers - the ultimate tool for creating perfect stripes. They launched the first Allett mower in 1965 and the brand has since firmly established itself as being synonymous with creating stripes on lawns and sports grounds around the world.

The runners-up in the competition were: