0 Domoney Elected Fellow of the Institute of Horticulture 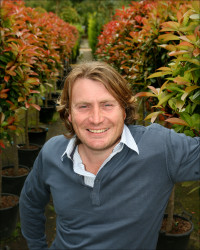 David Domoney, the TV gardener, retail columnist and RHS award winning designer has become a Fellow of the Institute of Horticulture.

Joining the ranks of Chris Bales, Curator at Chelsea Physic Garden and Elizabeth Banks, first woman president of the RHS, Domoney, who is currently presenting his own primetime show Garden ER on Channel Five says that he feels 'very honoured' to be elected. A member of the Institute since the 1990s he has played and continues to play a key role in the promotion of British horticulture abroad through his work for the British Consulate in Canada and public speaking engagements in Mosco, Germany and Spain.

David, who has a strong pedigree in horticulture, believes in his work with young people. "We've been working with local horticultural colleges giving students hands on experience during the build up of our show gardens, and pioneered the Young Gardener of the Year competition in conjunction with the Prince's Foundation for the Built Environment," he explains. "I've always believed in the Institute's emphasis on encouraging young people into horticulture and its drive to promote our industry,"