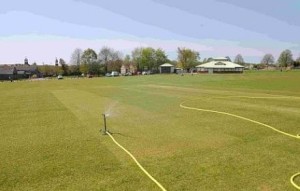 Dorchester Town Council has apologised to Dorchester Cricket Club over the circumstances which resulted in them being docked 20 points.

The first XI were unable to play their opening league fixture of 2013 against Wimborne & Colehill last Saturday because the council-owned pitch at the club's Recreation Ground home was not ready.

Council town clerk Dennis Holmes said the decision to deem the wicket unplayable was made due to the toll the harsh winter had taken on it.

However, he was keen to point out that the council informed the club of the situation on April 18 and not at two days' notice as previously claimed.

Holmes also told Echosport that the playing surface would be ready when Dorchester Seconds entertain Broadstone Thirds this Saturday.

"The problems with the pitch are as a result of a bad winter," he said. "It would have been ill-advised to play on it before it was ready and ruin it for the rest of the season.

"We did tell the club about the situation on April 18, not 48 hours before Saturday as reported.

"We told the club we were not going to be in a position to have a grass pitch available for last Saturday.

"Obviously, it is a situation that we regret and something that in my 26 years at the council has never happened before. "It is something we plainly don't want to happen and wasn't a decision we took lightly.

"I can only apologise on behalf of the council to the club, Wimborne and the fans."

He went on to add: "I'm told it will be ready for this weekend."

Dorchester hire the ground from the council on a match-by-match basis but league rules state that if a side cannot fulfil a fixture, or they "scratch" it, they face a £30 fine and 20-point deduction for a first offence.

The punishment, as far as Holmes is concerned, is too harsh on the club but he stands by those who made the decision.

"I think it's very harsh for them to be deducted 20 points when it's a situation over which they have no control other than they did have two-and-a-half weeks' notice to tell the league, the other team and try to find another pitch," he added.

"It's an unfortunate situation and one that, who knows, with the benefit of hindsight, going back to last autumn we may have been in a position to avoid.

"The grass has started to grow now but it didn't happen early enough and the fact we were still getting frost at the end of April didn't help.

"The groundsman was in consultation with his line manager and they looked at it together and made the decision.

"I completely respect their judgement. I'm not offering any criticism at all.