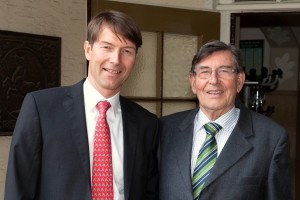 It's true, father and son were both born on May 7th, one in 1934 and the other one in 1964 and they have now jointly reached 130 years: Klaus Dreyer, former director of Amazonen-Werke in the third generation and his son Christian Dreyer, the current director in the fourth generation. On the 10th May, 2014 the mutual celebration of the 80th and 50th birthdays was held with many friends and colleagues at Amazone in Hasbergen-Gaste.

Continually the motto "We have to go out into the world" has dominated the work both of Klaus, and now also Christian Dreyer. So, as general manager, Klaus Dreyer, in addition to the looking after national market, also strongly ex-panded the international Amazone sales network.

During his time, Amazone opened its access to numerous new markets, above all in Europe whilst at the same time, Klaus Dreyer was intensively engaged with the extension and the permanent modernisation of the production lines. Emerging under his regime and at that time path-breaking was the introduction of Amazone taking, in-house, the production of hydraulic rams, gear boxes and plastic components.

Together with his wife Marie Luise, Klaus Dreyer still enjoys the best of health. He still is a member of the Amazone general management and actively cares for numerous special projects in the company. Amongst other matters, he is responsible for the company report. In addition he has published many books on vintage agricultural technology. In 2013, he celebrated, together with his cousin, the 55th anniversary of his time with Amazone.

"In many respects he is a great mentor for me. He provided me with many valuable things to remember …" is the way Christian Dreyer describes the relationship with his father. After his graduation, he initially accomplished his studies as a business engineer and was then working in other tool and machinery manufacturing companies.

In 1994 he entered the Amazone Company and worked initially in the man-agement of Amazone's French subsidiary. In 1996 he took over the overall management of the sales operation of the Amazone Group prior to becoming, in 1999, general manager with the main responsibility for sales and finance. Right from the beginning, Christian Dreyer also cared intensively for the expansion of the worldwide sales network.

Under his direction numerous addi-tional subsidiaries were founded and new importers were gained. Today there are company-owned sales subsidiaries in Great Britain, France, Poland, Russia, Ukraine, Hungary and Kazakhstan and, in 65 additional countries, Amazone co-operates with importers. Thanks to this strong internationalisation, the export share meanwhile amounts to 80% out of a total turnover of more than 500 million Euro (2013).

In addition to his role within the Amazone general management, Christian Dreyer holds many honorary functions. So, amongst other tasks, since 2009 he is active as acting chairman of the VDMA agricultural machinery industry association. Privately he enjoys family life with his two children and wife Bettina. Bettina Dreyer is also engaged in the Amazone Group working within marketing and also other special projects.

Together Christian Dreyer and his father Klaus Dreyer celebrated their 50th and 80th birthday on the 7th May, 2014.