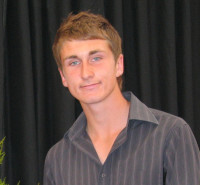 Barrie Lewis, an 18 year-old old apprentice greenkeeper from Bridgend in West Lothian has been named Scottish Landbased Learner of the Year by Lantra the sector skills council, making it the third year in a row that students from Oatridge College have picked up the prestigious title.

Barrie's success at an event at the Huntingtower Hotel in Perthshire follows that of last year's winner, 23 year-old farriery apprentice Sarah Mary Brown, from Giffnock near Glasgow, and the 2005 victory of Colin Inglis, an agriculture apprentice from Aberdour in Fife.

David James, the Principal of Oatridge College, said: "We are absolutely delighted for Barrie and very proud that once again, the judges have recognised the talent, dedication, hard work and quality of the students we attract to Oatridge, across a wide range of specialist subjects.

"It is particularly pleasing to note that Oatridge students not only achieved three-in-a-row for the College in the Lantra Scottish Landbased Learner of the Year Awards, but that this year we had three students among the 12 finalists for the title.

"Our congratulations must also go to agriculture student Aileen McLellan, who overcame a natural shyness to get as far as she did, and to Steven Sloan, an excellent agricultural engineering student"

Barrie Lewis has been in his present job as an assistant greenkeeper at Ratho Park golf Club near Edinburgh since last summer, where the Head Greenkeeper, Tom Murray, said: "His knowledge and enthusiasm are tremendous. He settled in very quickly and has not only made a lot of friends, but has been a huge help in training the younger greenkeepers. And while I think he is learning a lot from me, he is keeping me right up-to-date with everything he is learning at College."

The past year has been an exceptional one for Barrie. He was named Best SQA Level II Student at Oatridge College and picked up the Institute of Groundsmanship Edinburgh and Lothians Branch Cup. He reached the finals of the Toro Student Greenkeeper of the Year award, which according to the British and International Greenkeepers Association (BIGGA) is "the mark of what dedication and hard work can achieve." Three days after his 18th birthday, Barrie became the youngest-ever champion at his local Bridgend Golf Club, and then he was selected to join the team of greenkeepers which looked after the Loch Lomond course, during the 2006 Scottish Open.

Tom Murray said: "It's also great that Barrie is such a good golfer, because it means he knows exactly what the playing members are looking for."
When fully qualified, Barrie hopes to broaden his experience by working abroad for a time, then find prestigious club in the UK, where he can pass on his skills and knowledge to younger greenkeepers. His lecturer at Oatridge College, Graeme Bryce, said: "With his commitment and drive I have no doubt he will fulfil his ambitions. He is a model student who is looked up to by all of his colleagues."

The other two Oatridge College finalists in this year's Lantra Awards are:

● Aileen McLellan is 17 and is apprenticed to her father, David, on the family farm at Port Charlotte on Islay. Last summer she won the College prize as Level 2 Student of the Year in Mixed Farming, in recognition of quality of her practical and academic work and attitude to study.

Aileen gained her passion for farming from her late grandfather, having spent a large part of her childhood in his company. She said: "When my Grandpa died, I really wanted to follow in his footsteps because he loved the livestock and I love the livestock too. It's hard work, but that doesn't bother me. I just get on with it."

Having left Bowmore High School with the express intention of taking up a Modern Apprenticeship, Aileen chose to leave home for the first time to study at Oatridge College. She admits it was a big wrench, but: "I went through a really bad patch just before leaving school and I wasn't enjoying it. I would rather have been at home working, but at the College it was all different, learning about the things that really interest me."

● Steven Sloan, from Ayrshire, is described by his Oatridge tutor Alan Mowitt as a hard-working, personable, willing and obliging young man", but when Steven was looking for an apprenticeship as an agricultural engineering apprentice, he demonstrated a steely determination, according to his employer, Willie Kerr Junior, in Ayr.

"He pestered me for six weeks", said Mr Kerr. "Every applicant tells you that the only thing they ever wanted to do is be an agricultural engineer and you often get the feeling that it lacks sincerity, but as soon as I relented and met Steven, I knew he was genuine. He has turned out to be a really great apprentice. He has met every challenge this hard industry has thrown at him and he gets on well with everyone, customers and co-workers."