0 Drain to train at The Vale Resort, Cardiff! 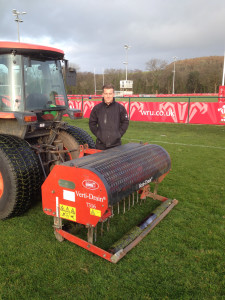 The Vale Resort is the training home for Cardiff City FC, Cardiff Blues, the WRU and FAW. It's a big complex comprising of 7 hectares of sports pitches under remit of Simon Heal, Head of Sports Turf, with only 2 other qualified groundsmen to look after it all.

Simon is a big fan of the Redexim Verti-Drain™ from Charterhouse Turf Machinery, especially as the beginning of 2014 saw nearly non-stop rain. Luckily, working the Verti-Drain in the very few dry periods within that time helped to keep the pitches playable and draining.

The ongoing maintenance programme is very dependent on the weather and the partners' individual training needs, which tend to be pretty heavy in the winter. Following their weekly games in 'the season', all of the training pitches are used heavily throughout the week.

Pre-season could see several days of double training sessions, but once the season kicks off its normally one session a day. That's a lot of wear for the pitches to tolerate.

The Vale Resort owns both a Verti-Drain 7626 and 7316. The machines are mostly worked 'out of season', before renovation work, to provide aeration ready for the growing season.

Although the training pitches are naturally well drained, the Verti-Drains help to relieve compaction; promote root growth and assist in surface water being e 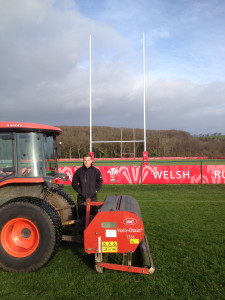 Simon finds the 7626 to be great for when the ground is firm; for renovation and after renovation in the summer. "It is a robust machine," he says, "great for relieving compaction with its ability to create lots of heave - using 25mm diameter tines with a working depth of 250mm provides fantastic aeration."

The Verti-Drains were already in place when he took the role, however, after the Deep Roots demo day, Simon was also very impressed with the Verti-Drain 2220.

"I was given a demo of the beast and managed to cover 3 pitches in one day - which is a bonus if it's dry and the pitches free and you need to complete the task quickly.

Also on my wish list is the Tool Carrier because of the multi-function implements that can be worked by the unit."