0 Driving the distance for dementia 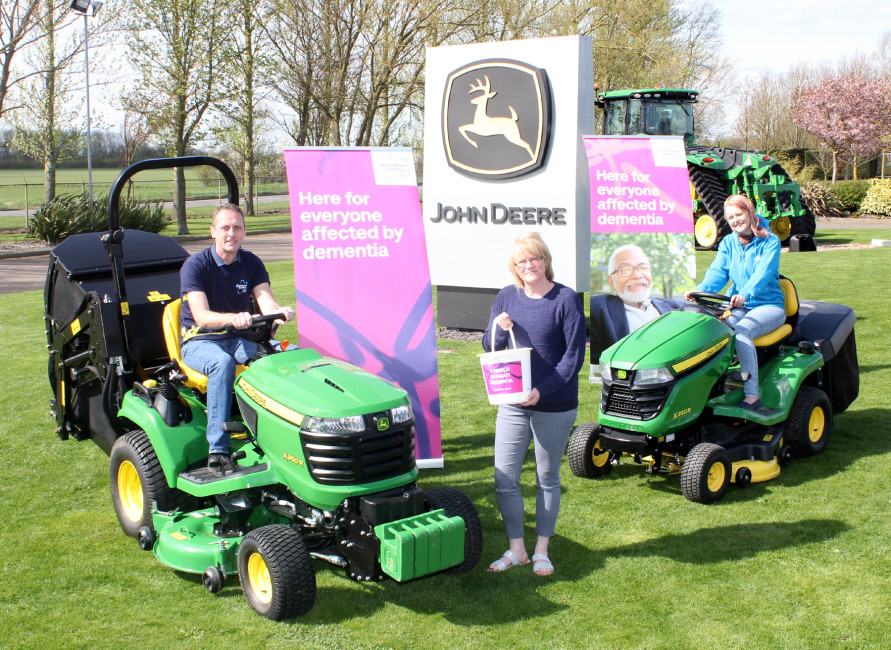 The 'Driving the Distance for Dementia' Challenge is now due to set off from John O'Groats at 8am on Tuesday 25th July 2017; the signposted distance to Land's End is 874 miles. The planned route goes past the Maxfield family home, where Andy spends much of his spare time cutting the grass in public open spaces around the village.

Since changes were made to the original plans in order to meet Guinness' stipulations for the record, which has not been attempted before with an unmodified lawn tractor, Andy is still hoping to complete the distance in less than five days on his own. He has recently been promoting the challenge at shows and events in the north of England, starting with a visit to his beloved Blackburn Rovers FC - see the club's video at https://www.youtube.com/watch?v=y2hyoHbP5j8&feature=youtu.be - and including this month's Great Yorkshire Show. 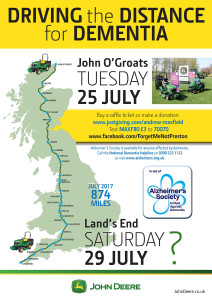 The current route (see attached map) takes him through north-east Scotland to Inverness, then mostly through central Scotland to Lockerbie. From here the route follows north-west England via Carlisle and Preston, and onwards along the English/Welsh border via Shrewsbury and Gloucester to Bristol. The final stretch runs down through Taunton and Bodmin to Land's End.

Andy Maxfield will now be using a 24hp X750 lawn tractor and accompanied by support vehicles provided by John Deere. The X750 has power steering, cruise control and a top road speed of around 10mph, and it will be specially equipped with John Deere's JDLink remote monitoring system to help provide evidence of the completed journey to Guinness World Records. Andy will also be supported on the journey by his wife Karen and their daughters Kathryn and Kaitlyn.

Andy's 77 year old father James and James' mother Theresa were both diagnosed with dementia, which prompted Andy to start seriously fundraising for the charity in January this year. "Initially I had the idea of a fundraising ball to raise money for Alzheimer's Society, which will be held in Preston in December," he says.

"After that, because friends and neighbours often take the mickey out of me for being into lawnmowers - I've got eight altogether for cutting the grass around the village - I just thought it would be appropriate to try for the world record for driving a lawn tractor the length of Britain. I asked John Deere, although I don't have one of their mowers at home, as I know they make quality products and I wanted something to get me from A to B without breaking down!"

John Deere Limited turf division manager Chris Meacock adds: "Our UK and Ireland employees select a specific charity each year to support with a variety of fundraising activities. By coincidence we had chosen Alzheimer's Society when we were approached by Andy Maxfield to help with the Guinness World Record attempt, so it was very good timing on his part!

"We are delighted to back this very worthy cause and are looking forward to the challenge. In addition to providing the X750 for 'Driving the Distance for Dementia', we have offered Andy a new X350R lawn tractor worth over £5000 as a special raffle prize for the family's charity ball." The ball will take place at Preston Masonic Hall on Saturday December 9th.

Andy Maxfield's charity ball has a JustGiving website page for donations at www.justgiving.com/andrew-maxfield, with the total already standing at over £2200 in early July; donations can also be made by texting MAXF80 £3 to 70070. More information on the ball and the challenge are available at www.facebook.com/ForgetMeNotPreston, and by following Andy on Twitter @AndyMax69.