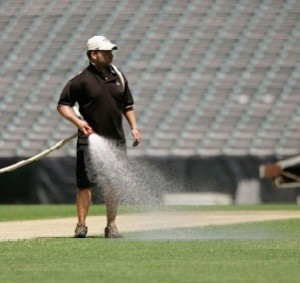 Last Saturday Eden Park was hosting a rugby match between the Roosters and the Warriors in the NRL. On Friday it hosts the deciding Test between England and New Zealand, the first five-day match here since 2006, with much focus on the drop-in pitch which was lowered into place just hours after the rugby finished.

The process where the pitch, grown near the No. 2 Oval, is wheeled on a large flat-bed frame into the ground took about three hours. Drop-in pitches are not new, Eden Park has used them since 2002, but they always add intrigue especially considered the talk surrounding the nature of the pitches so far in the series.

Mark Perham, the head groundsman at Eden Park for 11 years who looks after the surfaces for cricket and rugby, said he had received no direction from New Zealand Cricket over what to prepare. "I wouldn't be surprised if there was a result. No one wants to see three draws. Getting through the new ball is key, wickets can go in clumps so the game can move on pretty quickly."

The pitch for this Test has been used for three Twenty20s earlier in the season and has since been reseeded. Perham added that he expected more pace and bounce than the previous two Tests and said that a good guide are the pitches produced on the neighbouring oval which hosts Plunket Shield matches and which uses the same soil.

However, he said there was unlikely to be much for the spinners as the clay-based soil used does not break up although Bruce Martin, who plays for Auckland, picked up seven in a match early in the summer and 5 for 45 in the second innings against Canterbury.

There were a wide range of totals this season in the Plunket games staged next door including teams being bowled out for under 200, but also a total of 658 for 9 during which Colin Munro (269) and Craig Cachopa (166) added 377 for the sixth wicket. In another match Gareth Andrew, the Worcestershire allrounder, hit an unbeaten 180 at No. 8 although that may have more to do with the standard of New Zealand domestic cricket.

See the rest of the article sourced from the following link :- Espncricinfo.com