Duncan Ross sportsturf construction and drainage contractors has completed a major project to install drainage and renovate the pitches at Lancashire based Bolton RUFC. 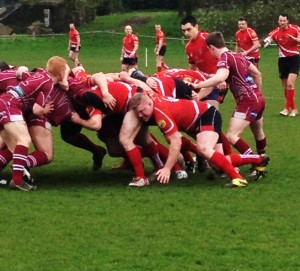 Four years ago Bolton RUFC would not have been able to stage a game following torrential rain. In fact the three pitches the club leases from the local council would have resembled a quagmire. All matches would have been called off.

Despite the popularity of the club and the enthusiasm of the players - 50% of the current adult teams have come up from their own junior ranks - the constant cancellation of matches was beginning to take a heavy toll with more and more players losing interest or moving to other local clubs with better playing facilities.

Bolton RUFC took over the council site at Mortfield Pavilion 26 years ago and only employed some basic routine maintenance to help with general drainage and aeration.

With the council hamstrung by spending restrictions, Bolton RUFC, knew any improvements would have to be financed by the club itself. And at a cool £140,000 this was no small matter.

Bolton has to work for its money. In many ways it is not a typical rugby club. For a start, it is not located in the leafy suburbs, but sits in the middle of one of the most deprived wards in the North West. This is where the volunteers come in.

"Rugby doesn't yield up volunteers automatically," says Senior Rugby Chairman Jon-Paul Hardman. "You have to work at it. Our dealings with community groups have produced as many volunteers as our rugby."

34 coaches and 70 volunteers help 120 seniors and more than 240 juniors play here every weekend. In order to refresh the intake, the effort to recruit support extends to sending coaches into primary schools: last season more than 40 schools in the Bolton area enjoyed a rugby session put on by the club. And once a parent turns up with their son or daughter, their help is immediately sought.

They also, benefitted from voluntary expertise. Local resident Resma Patel has vast experience in accessing grant funding. She happily put in the time and patiently sourced all the necessary money.

Funding was secured from several sources including Sport England and gave Jon-Paul Hardman and his club committee the means to upgrade the pitches.

Professional Sports Turf Design (PSD) Consultants was engaged and evaluated what needed to be done. Duncan Ross specialist sports turf drainage and renovation experts were chosen by PSD to undertake the work.

The first team pitch was completely re-structured, a new drainage system and pitch laid, a partial refurbishment of the second pitch and secondary drainage installed on the third. Boundary fencing completed the finish giving in the words of club captain Les Towler "A proper club which we can all be proud of."

Since then pitches have been re-laid and properly drained and not a single game has been cancelled due to bad weather, water logging or excessive dryness. There have been fewer injuries and greater enjoyment at all levels of competition.

MD Duncan Ross is delighted that the new construction and remedial work has been so well received. "It is a big investment for any club. But now the pitches are open for use all year round and the quality of play is helped, not hindered by the turf."

The pitches have passed all the inspections and met the criteria to hold rugby league games. Players, referees, RFU officials all have commented on the outstanding quality of the pitches and playing conditions at the club.

A magnificent achievement all round.