Upgrades to the infrastructure at Eastleigh Football Club's Silverlake Stadium have been followed up by extensive pitch improvements as the club aim to leave the Vanarama National League and push to reach the Football League. Phil Helmn MG talked to Head Groundsman Dan Barnes about the work being undertaken. 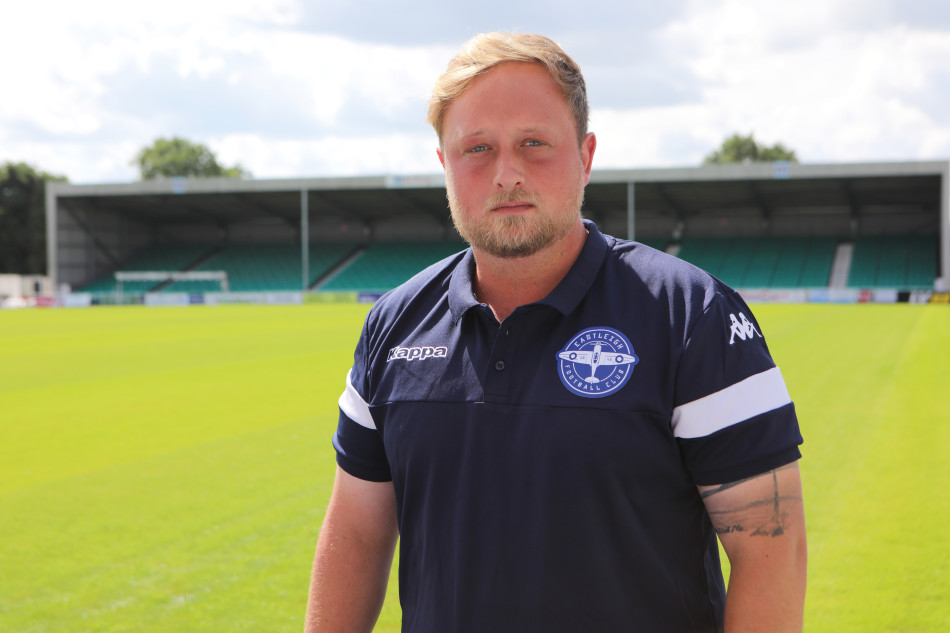 I met up with Dan Barnes the Head groundsman at the Silverlake Stadium, the home of Eastleigh Football Club, at an extremely exciting (and extremely busy) time for both Dan and the club as extensive upgrades and pitch renovations were well under way.

Like most groundsmen, I soon realised Dan's passion and commitment for his job as he talked me through his own journey to realising his dream of being a head groundsman. After leaving school he spent time playing the drums in a UK touring band, building boats and then hovercraft - not something many can claim as a job - before making the move to Eastleigh. Dan started at the club as head of bar and events and held that position for a year and a half, but the desire to be more involved in the pitch was obvious to his bosses. Dan was offered the head groundsman role, a position he has held now for four years. In that time, he has thrown his heart and soul into learning and developing his skills and gained his NVQ level 2 qualification from Sparsholt College in sports turf management in 2017/18 and his spraying certificates in record time.

He appreciates and thanks the help and support he receives from John Wright and Ian Lucas, both head groundsmen at Southampton FC and Bournemouth FC respectively, as they have always been there when he needs advice. "It's a wonderful industry. All groundsmen are willing to help each other which I find amazing," explained Dan.

The passion was clear to see. Dan remembers being an avid supporter from an early age and recalls volunteering at the club in the school holidays. "I used to tidy up and paint fencing around the pitch as a youngster," he mused. "I just wanted to be involved, I loved (and still love) the club so much."

One of the main reasons for my visit was to see for myself the pitch renovation and chat with Dan to understand the reasons behind the club taking the huge decision and commitment to install a fibre-based pitch. 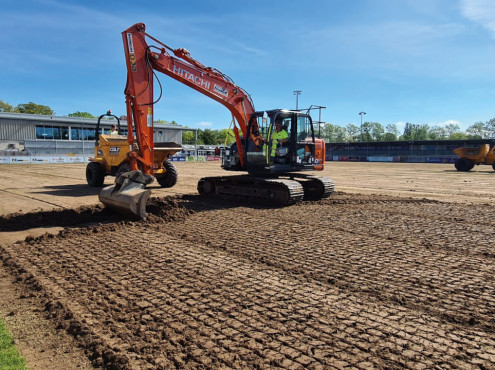 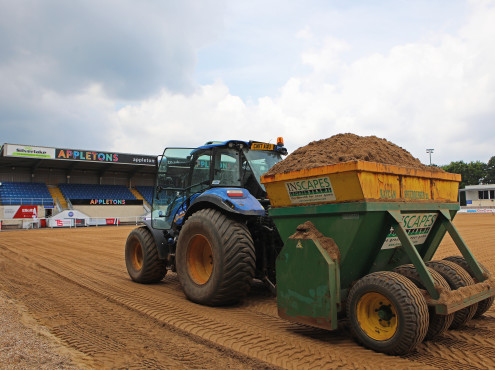 Dan explained the old pitch failings; "We knew that, because the pitch was built many years ago using local, predominantly clay soil, it would struggle during wet winters and hot summers. The pitch construction led to some incredibly challenging periods, especially in the winter months when rainfall led to continuous waterlogging. The old pitch infiltration rate was approximately 10-20mm per hour, with the new surface expected to drain rainfall up to 350mm per hour, which is an incredible difference."

"It was extremely challenging trying to keep the pitch in a suitable condition for matches in the depths of winter. I was lucky to have lots of volunteers to help me squeegee water, remove covers and prepare ahead of matches, but sometimes the mountain was too high to climb."

"In the summer, the ageing irrigation system couldn't always cope with the demand, and I'd be out there hand watering with mobile sprinklers. Having said all that, we only lost out on matches on a handful of occasions thanks to the support, hard work and determination of everyone, but we knew we had to do something to improve the pitch and its infrastructure if we wanted to progress as a club. To that end, we were fortunate to secure a 70% grant from the Football Foundation Pitch Improvement Scheme for assistance in the pitch upgrade and, together with the club's 30%, were able to begin work. Even with this amazing monetary assistance, we have been so grateful for the help from our friends at Southampton FC who, when renovating and stripping off their Fibresand training pitch kindly donated the 2,100 tonne spoils to us. We paid for the transport, the 'top up' came from Mansfield Sand."

Work commenced on Monday 24th May in collaboration with main pitch contractors InScapes, overseen by pitch consultant Jonathan Smith of GeoTurf Consulting. As well as the pitch being replaced with the Fibresand rootzone, the extensive reconstruction sees a brand-new drainage system, and an upgraded irrigation system installed.

Dan explained; "the new irrigation system will have a huge impact on our ability to maintain the pitch to a high standard. We have installed a full pitch coverage of 16 x Hunter G800 sprinklers around the perimeter of the pitch and a further 8 x i80 heads on the pitch. The i80s will allow us to 'slick' the pitch up on matchdays a lot more quickly and allow a faster surface for the players - something they like. They are all spaced head-to-head to give total coverage which will also help me immensely during the grow-in period." 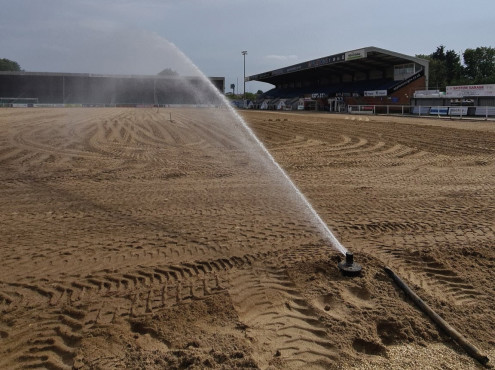 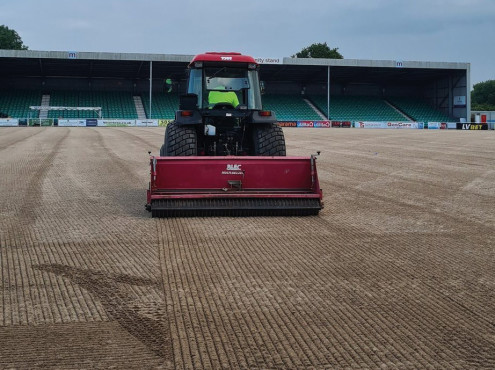 During the grow-in, Dan has been supported by Rigby Taylor with advice on his nutrient inputs and has, and will, use a wide range of products to assist him in his programme which started with an application of 0:24:24 at 80gms/m2 at the lower sand level before the fibresand rootzone was installed.

This was followed by a second application of pre-seed fertiliser ameliorated into the upper rootzone layer using ICL Pearl renovator 11:5:5 at 50gms/m2. Dan explained; "Both these applications are designed to really help kick-start the growth. After seeding, I will apply a 6:4:6. containing humic acid feed at 30gms/m2 to aid establishment and help maintain the early growth. This is then followed by another granular application of Symbio Caviar organic slow-release fertiliser 10:0:4 at 35gms/m2 at second leaf stage to keep the turf 'topped up' with goodness."

"It's important to mention that, in between these granular applications, I am programmed to supplement with a combination of foliar and soil liquid feeds which help the new turf establish at the fastest possible rate. These liquid feeds provide a rich source of carbohydrates, trace elements, seaweed and humic acid. Once I have good growth and I begin cutting, I will follow up the feeds with more conventional application rates of 6:0:18 35gms/m2 and a foliar 26:0:0 at 40l/ha, coupled with more liquid feeds to 'push on', improve density and help strengthen the sward."

Dan continued; "I only have fifty-one days (from seed going in the ground on 8th July) before we play our first home game against Wrexham!" 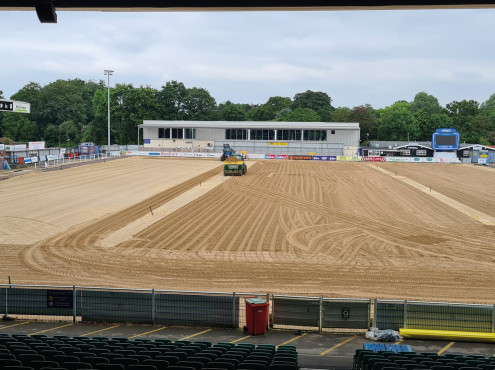 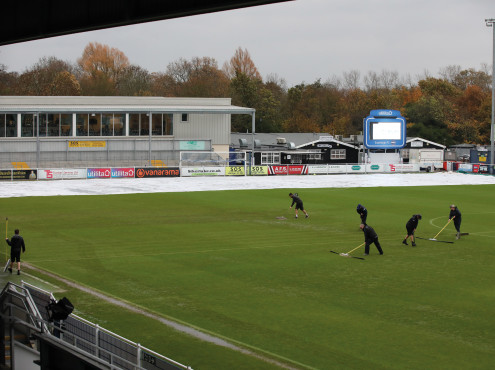 Finally, I asked Dan what his aspirations were for the future; not only for himself but for those of the club he is passionate about. "Personally, within my job role, I want to continue to learn. I have been fortunate enough to be faced with a lot of challenges during the short time I've been in charge, and I've made sure that, however difficult they may have seemed, I've remained determined to treat each one as a learning curve. To take this amazing experience at the club with me and be able to use it to constructively go forwards and to develop myself would be the aim. I'm fully aware there is still so much to learn, and I'm fortunate to be in such an in-depth industry with new innovative methods, machinery and technology continually finding its way into the industry, it's exciting."

"I'm fascinated by the science which goes hand in hand with my job. Agronomy is something I would love my career to move towards. I would like to gain further education in that side of things to make sure I can gain the best understanding about what's going on under the surface as possible. Now, with a new sand-based pitch, here at Eastleigh, it's going to be important to monitor microbial activity. So, I will be keenly wanting to educate myself, whether that be online, further college courses or just my own investigations by speaking to my colleagues and peers all about that."

"I have found watching the pitch rebuild very educational, so maybe a role in pitch design and consultancy might be something I would find interesting in the future. It just makes you realise how much goes into these projects."

Dan concluded: "Basically, I will continue to allow myself to remain completely open minded in order to learn and develop within this industry, which I find incredibly enjoyable and interesting. I feel that I have no better platform to be able to do that than here at Eastleigh. I've supported the club all my life, it's in my veins. I care about it and am excited for its future. Watching the club grow and change over the years has been incredible and I hope we achieve the dream of Football League status."

"I'm especially proud of the tight knit group of people running this place on a day-to-day basis and believe they/we deserve nothing more. I hope we keep our all-inclusive ethos and models which we are so proud of. Whether it be the first team, our disability teams, ladies teams or walking football groups, there is a real community spirit at this football club. A togetherness which is infectious and something we are all proud and lucky to be part of." 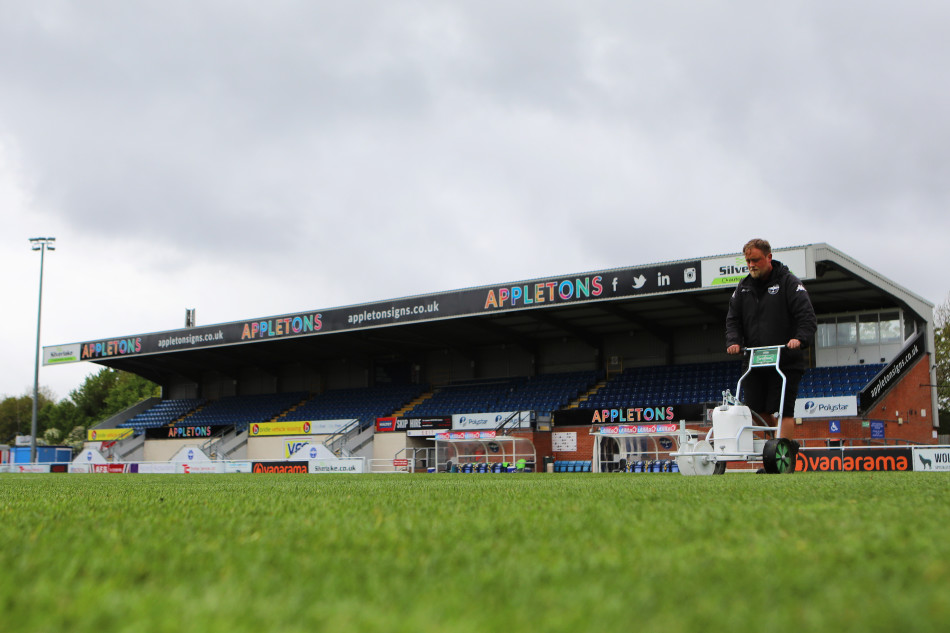 Eastleigh Football Club is a professional association football club based in Eastleigh, Hampshire, England. They currently compete in the National League, the fifth tier of English football, and play their home matches at The Silverlake Stadium which nestles next door to Southampton airport.

The club was formed on 22 May 1946 by Derek Brooks and a group of friends in the Fleming Arms public house in Swaythling, Southampton and originally known as Swaythling Athletic.

The club began playing home matches on Southampton Common when they first joined the league in 1950. In keeping with their early progress, the club moved to a new ground at Ten Acres in 1957 - which remains their home to this day.

In 1980, the club were renamed Eastleigh but were without an official nickname until 2005 when a competition was run amongst the fans and 'Spitfires' was chosen as the famous Spitfire aeroplane was built in Southampton and first flown from Eastleigh Aerodrome, now known as Southampton Airport.

Until 2006, the area opposite the grandstand was hard standing but during the summer of 2006, a metal back and roof were added, along with an electronic scoreboard on the roof of the Premier Telecom stand.

In 2009, 150 seats were added to the middle of the Silverlake Stand to give Eastleigh the necessary ground grading to compete in the Conference South play-offs.

In February 2010, businessman Stewart Donald bought Eastleigh F.C. who were then playing in the Conference South League. In May 2017, with the club now one division higher in the National League, he announced that he would repeat his investment of £10 million in the club with the aim of getting them into the English Football League.

True to his word, the investment continued, and the ground was, again, extensively redeveloped during 2014. The East Stand at Sandy Park was rebuilt along the Premier Telecom side of the ground as well as behind the clubhouse goal, providing a covered terraced accommodation for 2,000 spectators. On 2nd December 2014, the newly completed 2,290-seater South Stand was opened for the first time in a Conference Premier game against Dartford, with the club allowing spectators in for free to celebrate the occasion.

In April 2018, Stewart was chosen to be the leader of a consortium offering to purchase Sunderland, who were put up for sale by billionaire owner Ellis Short. He agreed to sell Eastleigh so that he could own Sunderland and on 21st May, he officially became owner of Sunderland, doing so without the consortium to speed the transaction. The club is now in the possession of Kenny Amor, Tom Coffey and other directors. 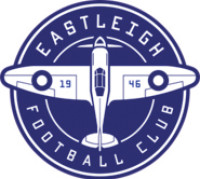