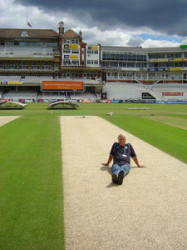 It is the third year in a row that the Brit Oval's groundstaff have been recognised for the quality of pitches at Surrey. Meanwhile Taunton were named runners-up in both the four-day and one-day categories.

ECB First Class Cricket Operations Manager, Alan Fordham, said: "Umpires marks have indicated a good overall standard of pitches in both four-day and one-day cricket in 2005. We are pleased to announce these awards which recognise venues and head groundsmen who have excelled this season.

"Special mention is made of Bill Gordon at the Brit Oval and Philip Frost at Taunton who have finished winner and runner-up respectively in both the four-day and one-day pitch categories which is an outstanding achievement. ECB congratulates all groundsmen who have won awards in recognition of their work in 2005."

Paul Sheldon, Chief Executive of Surrey County Cricket Club, said: "This is another great achievement by Bill and his team. They produce excellent wickets which allow spectators at the Brit Oval to enjoy watching the best possible contest. A large part of the Brit Oval's strong reputation as a world class venue is due to the wickets produced by our groundstaff."