The Grounds Team at the Edgbaston Priory Club, led by Grounds Manager David Lawrence, and Assistant Grounds Manager John Lawrence, have spent the winter battling the elements to maintain the club's eightchampionship grass courts, whilst balancing the management of the club's other court surfaces, and the fourteen acre grounds. In their first article for 2016, they discuss the unusual weather this winter, and how they've had to adapt in order to stay on top of the site. 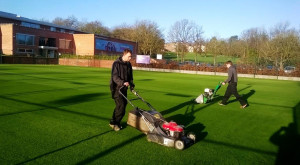 It's fair to say that the winter of 2015/16 has been one of the most challenging ever for anyone in the groundcare profession. Whilst, in the West Midlands, we can only sympathise with those worse affected then us, namely in the north-west of the country, we have still found ourselves battling significant rainfall, unseasonably mild temperatures and a lack of frosts. All of this has contributed to continued growth through the winter months, but with very little opportunity to actually get on and work on anything!

The most obvious place we have experienced problems has been the club's eight championship grass courts. In a normal year, we'd spend the winter fairly relaxed, as the frosts check any potential disease and stop the growth, meaning we don't need to carry out too much maintenance, namely mowing! However, this year, we could have cut the courts on a weekly basis such has been the growth we have experienced.

The problem, of course, has been that, to get on the courts weekly, we need some dry weather. However, that has been in short supply! We've found that this winter, more than any other, we've had to work hard to ensure that when opportunities arise to get on the courts, we take full advantage of them. For example, whilst most people would have been enjoying a nice Christmas break, we happened to have a dry enough day that, on December 27th, we were able to cut and sarrel roll the courts. 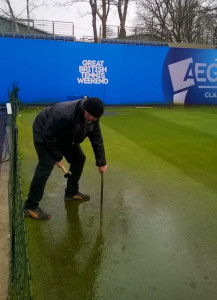 Drainage is a key issue when the weather has been so against us. Unfortunately, clay based soils don't lend themselves to free passage of water, and anyone who is familiar with the construction of our courts will know that, on our site, these issues are only intensified.

Of course that the drainage potential of our courts is severely compromised. Whilst traditional aeration can be helpful in a lot of instances, its effectiveness is severely limited on our courts. We therefore have a few different methods which help us greatly.

The more orthodox method we use is an Air2G2 air injection treatment in the autumn, carried out by Martin Shepherd from Technical Turf Limited. We target this treatment to off court areas behind the baselines, and also a lap around the perimeter of the whole grass area. This targets the highest wear areas, but also the areas which see the most traffic, and therefore the most compaction. This means we can open the profile up to a depth of around ten inches, and we see a lasting improvement in surface drainage through the winter as a result.

Our less orthodox method of aeration involves a marquee pin and a sledge hammer. In some areas no amount of mechanical aeration makes a difference - as well as not being built the traditional way, our courts have not been built consistently, so the depths of different layers under the grass vary greatly (even from one end of a court to the other), meaning some areas drain reasonably well, whilst others don't drain at all! To get through this problem (literally!) we hammer a marquee pin through the surface, until we hit stone at the base of the profile. Once the pin is removed, it is literally like taking a plug out of a bath - you literally can see water draining away down the hole.

Obviously we don't carry out these operations on the actual playing area so that we don't risk cracking of the soil in the summer. Long term, we'll look to dress the actual playing area slightly more than the court surround. This should mean that, when we get heavy rainfall, we have a slight gradient across the surface, towards the surround areas where we can use our aeration methods and get rid of excess water.

Whilst some would view the issues our court profile creates as a problem, we do view them as a challenge. It gives us the chance to learn new skills and adapt others, in order to reach the standards we set ourselves year on year. It's fair to say it certainly keeps the job interesting. 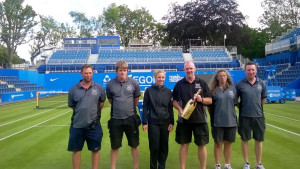 Perhaps more importantly, in the last couple of years the courts have progressed to a point where we're (almost!) happy with them. While we can, and always will, see room for improvement, the feedback from stake holders such as the LTA and the WTA has been very positive. We've also had exceptional feedback from the players who have played here, including our 2015 champion, and recent Australian Open winner Angelique Kerber. In that sense, we can take these compliments as an indication that our methods, whilst a little unusual, are certainly working!

Going forward, we'll continue to do what we can with our grass courts, though hopefully some drier weather will materialise for the whole country so that everyone can get stuck in with catching up after what has been a torrid winter.

We've also got a number of projects coming up that will keep us extremely busy. We've got several large areas to landscape with several hundred shrubs to be planted and a few hundred square metres of turf to be laid. We've also got our four clay courts to renovate, which would normally be close to finished by now, but with the winter we've had have not even been started! 2016 is definitely shaping up to be our most challenging year to date, but we wouldn't have it any other way!

Images: Top - Whilst most people were enjoying a Christmas break, our staff, including Steven Whitfield & Tom Day enjoyed a festive mow and sarrel roll!

Middle - Some of our aeration methods would probably be considered a little un-orthodox!

Bottom - The grounds team with 2015 Champion Angelique Kerber - who handed over her winners champagne as a 'thankyou' for the courts Dave and the team produced.