We visit a classic course where Surrey's chalky hills offer views of southern England countryside and the London skyline has been sensitively modernised, yet retains the ageless appeal created by its designer over ninety years ago. Neville Johnson learned about this year's 're-launch' from the club's course manager, Jon Budd 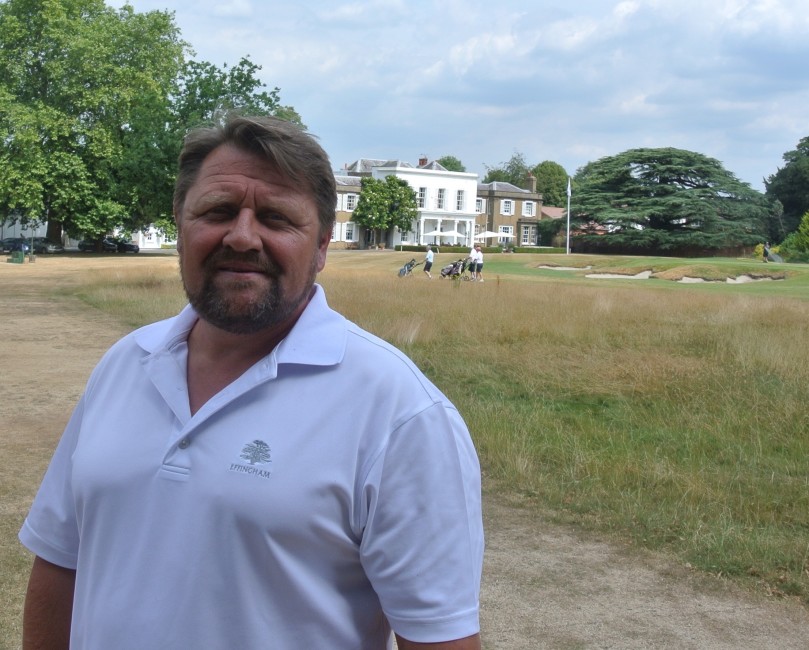 Harry S Colt was a golf course architect with a distinguished CV. Sunningdale, Muirfield and Royal Portrush all bear his signature, as does Effingham, which he created in 1927. It is a private members club with about 1,000 members altogether and waiting lists in every category. Considering there are thirty clubs within ten miles, it is a course of choice for many a golfer in these parts and beyond.

Set in 270 acres of the North Downs a few miles from Guildford in Surrey, it is a lengthy course, with a maximum of 6,800 yards for those driving off the back tee markers, and Colt laid it out in two distinct 9-hole loops. The club describes these as butterfly wings reaching up to the top of the downs.

The course is built on a chalky substructure, which allows excellent drainage and it is dry and playable even at the wettest times of the year. The club's proud boast is that the wet never shuts the course. Only bad snow does that.

As well as its beautiful Georgian clubhouse, once the home of the ennobled Howard family (aka the Dukes of Norfolk), there is a more recent and even quirky historic link more related to the course itself, or more especially the 17th fairway. It is said that Sir Barnes Wallis, scientist and inventor, first got the idea for the celebrated 'bouncing bomb' used to destroy Hitler's Ruhr Valley industrial dams from seeing golf balls bouncing up this particular fairway. He had the perfect view because his back garden overlooked this part of the course. When the course had been built, as was the fashion at the time, plots for the well-heeled were available alongside the new course. The Dambuster bomb maker lived in one of those erected in Effingham's Beech Avenue. Who knows whether history would have changed if he'd chosen to live elsewhere? 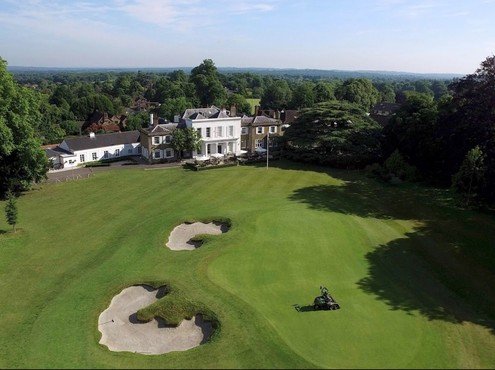 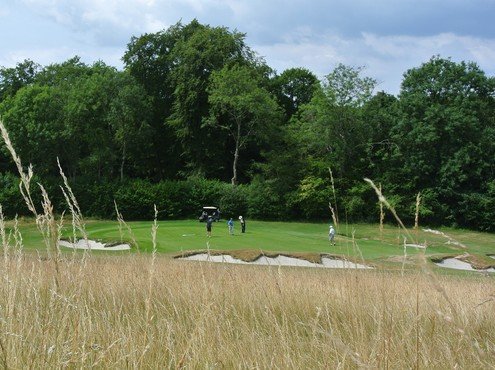 When the Effingham course was first built' there was hardly a tree from 1st tee to 18th green. Open downland prevailed. Over the decades though, tree planting, much of it inappropriate, became de-rigueur, reaching a peak in the 1970s (remember Plant a Tree in '73).

"It was about this time that all manner of species, from flowering cherry to firs, were introduced and, in truth, they had no place on downland," said Jon Budd, who has been in charge here for twelve years and is passionate about the downland course: its past, and its future.

"When I first came here I saw the need to begin some kind of woodland management scheme to redress this, for both golf and environmental reasons."

Chainsaws were in action pretty quickly, easing encroachment of tees and greens and bit-by-bit re-gaining a more authentic downland look. Jon's deputy, Gary Holland, is now in charge of ongoing woodland management at Effingham, which works very closely with Surrey Wildlife Trust and the Forestry Commission.

"The course is blessed with some of the most beautiful views in the south east and it's been a joy in recent years liberating these again," said Jon.

"In clear conditions a round of golf here will give you views into five counties, from Windsor Castle to the grandstand at Epsom, not to mention many a London landmark like the Wembley Arch and the Shard."

The 18-hole, par-71 course plays well all year round. Trees apart, it had changed very little in ninety years.

A downside was that the bunkers had changed, either by migrating, changing shape, or even been filled in. Most significantly, they had simply failed to keep up with changes in the game, especially club quality and golfers' skill and strength.

Just over five years ago, the club engaged Tom Mackenzie, of course architects Mackenzie and Ebert, to do a complete audit of the course, with the aim of recapturing the magic of the original Colt layout. Since then, every hole has had its bunkers recreated.

The huge task was completed last December, and the 'new' course officially opened in May. Effectively it has been reborn.

Jon Budd gave his thoughts on the how the project had begun, how it ran, and what has been achieved.

"Thinking back, the course had looked very 1970s and, in places, weak," he said. "There was a general recognition that it was getting tired, and a move to uplift things gathered pace."

"The whole thing started with the 18th green, which was getting on for 90 yards away from the clubhouse and it was felt play and on-looker involvement would benefit from it being closer. We appointed MJ Abbott to rebuild the green at the time when the contractor was on the course updating our irrigation to a computer controlled Rain Bird set-up. 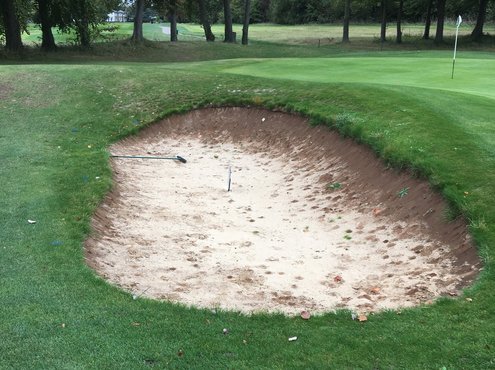 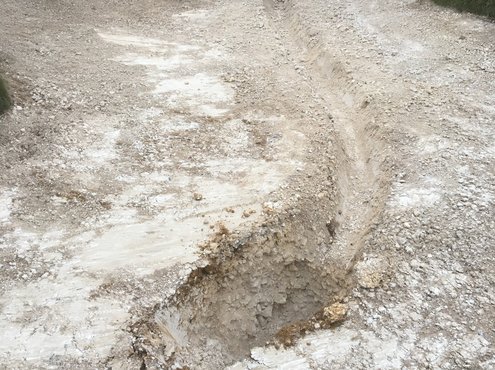 "At the time of the 18th green work, Tom MacKenzie, who had redesigned it for us, 'walked' the rest of the course and identified the weakness of the whole bunkering system and one or two especially tired holes, so he came up with what became a blueprint for a grand scale update. After a presentation to the whole membership, the idea caught fire."

"The decision was made to tackle three holes a year in order to keep the project under control, both practically and financially. MJ Abbott, already engaged in the irrigation upgrade, was appointed contractor for the entire course bunkering project."

"It made sense to have a single contractor carrying out all the work. Equipment synergy, I suppose you could call it, everything under one roof so to speak."

"Our new irrigation was completed in 2012-2013 and, during this time, Abbotts also reconstructed the 18th green and upgraded the 5th."

"These two holes were the beginning of the new bunker project. It gave the members an idea of what the whole course was going to look like. It was a radical change."

"We are blessed at Effingham in having a lot of land and a great layout, and in the rare position of owning it all too. There are never any limitations to any of the holes."

"The aim of the project was simply to bring things up to date. The challenge was to meet the expectations of younger golfers with their club strength, yet retain the original charm of the Colt course cherished by so many of the older members. Tom MacKenzie was very sympathetic to Colt's original intentions, and we think that the right balance has been more than achieved." 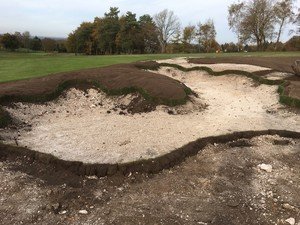 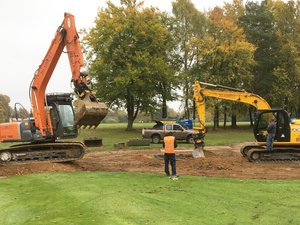 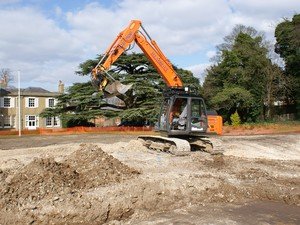 "Abbott's work was pretty well uninterrupted throughout. Managing the members' day-to-day was what required special care and attention, because they still had golf days and competitions where they wanted the whole course to be available, so keeping the contractor's scheduling flexible, but up-to-speed, was occasionally testing. Goodwill all round saw things run smoothly."

"Abbotts were always totally understanding, as you'd expect from a firm whose life is in and around golf courses. They were used to being moved here and there to keep the game flowing. They were always professional and discreet when necessary. The job still got done though."

"We've been delivered seventy-five amazing new block-built bunkers with modernisation in size, shape and position. They are so different, with some holes changing radically, yet the overall Colt look is definitely retained. Any golfer with knowledge and understanding of what a Colt course is would still say Effingham is as much a Colt course as it ever was, but very much up to date."

Jon and his team of seven greenkeepers are now turning their attention more and more to the greens. 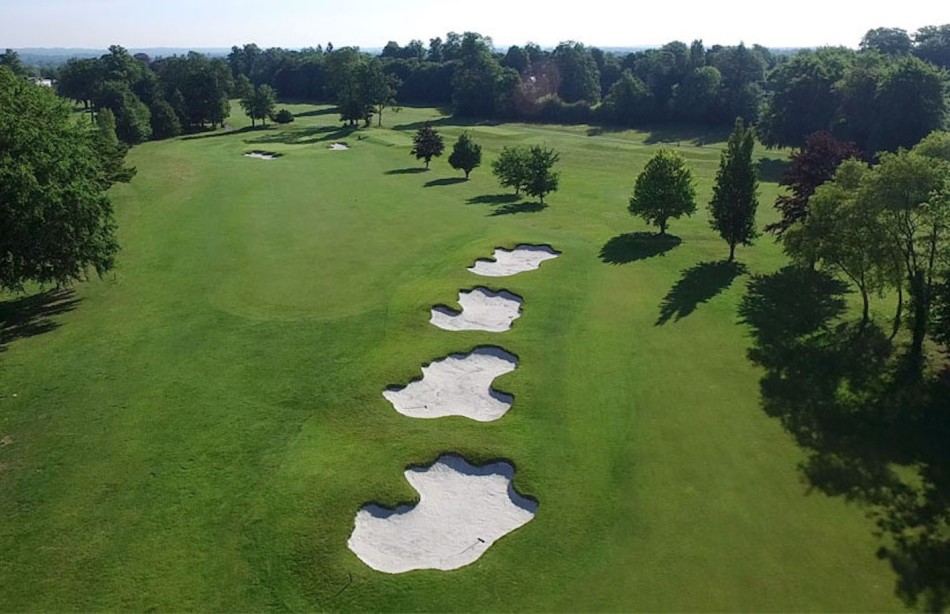 "We're hitting big numbers with topdressing and coring every week," he said.

"In our last report by Steve Gingell, which he does one every six months, he noted that he'd never seen such rapid progress and we're leading the way in greens maintenance at a private club with 40,000 rounds a year. He was impressed by the programme we, together with Greens Chairman Paul Robb and Greens Manager Steve Slinger, have introduced whereby we concentrate on four or five greens each week."

"What we've done is to switch to little and often rather than rely on major efforts across the whole course twice a year."

"Members don't want to see us constantly digging holes and waiting for us to get out of the way. We have a diary that keeps the programme under control. If we want to do coring, say, we make sure it isn't the same day from week to week. It's a way of keeping members from feeling they're hindered by routines. We call it guerrilla greenkeeping."

Jon believes that to be a successful greenkeeper, more than anything, you have to get to know your club members. A novel way he does this, and an indication of just how passionate he is about preserving the downland environment, is that once a year in late July he organises a fauna and flora day open to all members, their family and friends. Usually, around a hundred or so enjoy an educational - strictly non-golfing - tour of the course site to learn about downland geology, the species of grass, wild plants and flowers that flourish on the chalk downs, and the wildlife and birds that make their home there.

Jon also uses the day as an opportunity to tell members something about the course care carried out by his team, and the ongoing woodland management programme.

"You do always have to bear in mind that the course is theirs, not ours, and our role is to provide conditions for them to play and enjoy the game of golf. I think the bunker project, now it's been successfully completed, has helped them appreciate how much effort has been put in to keeping their Colt course as special as it was back in 1927."

What's in the Shed 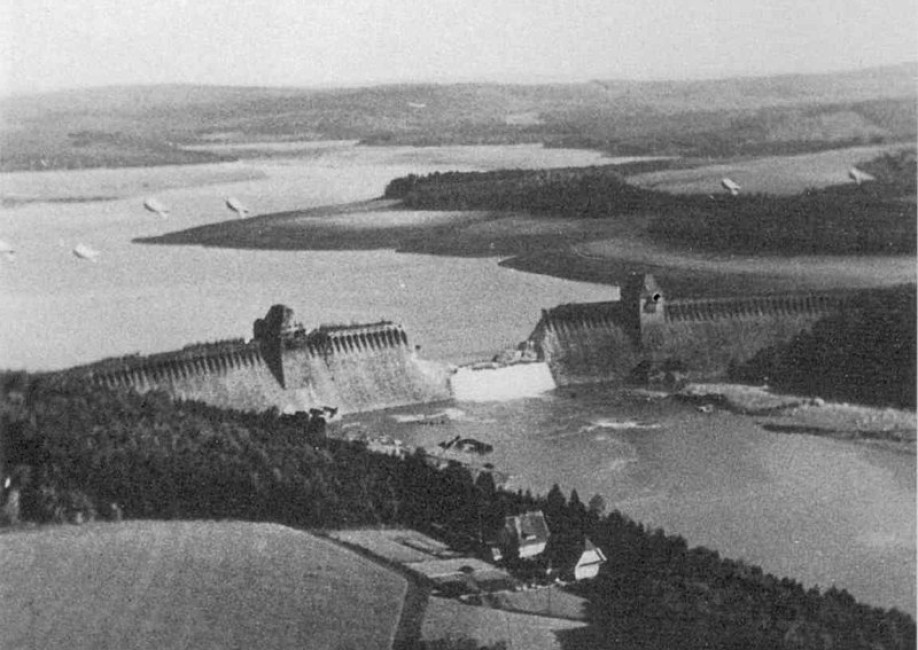 Sir Barnes Neville Wallis CBE FRS RDI FRAeS, was an English scientist, engineer and inventor. He is best known for inventing the bouncing bomb used by the Royal Air Force in Operation Chastise (the "Dambusters" raid) to attack the dams of the Ruhr Valley during World War II. The raid was the subject of the 1955 film The Dambusters, in which Wallis was played by Michael Redgrave. Among his other inventions were his version of the geodetic airframe and the earthquake bomb

The bouncing bomb was designed to bounce to a target across water in a calculated manner to avoid obstacles such as torpedo nets, and to allow both the bomb's speed on arrival at the target and the timing of its detonation to be pre-determined, in a similar fashion to a regular naval depth charge.

Early in 1942, Wallis began experimenting with skipping marbles over water tanks in his garden, leading to his April 1942 paper "Spherical Bomb - Surface Torpedo". The idea was that a bomb could skip over the water surface, avoiding torpedo nets, and sink directly next to a battleship or dam wall as a depth charge, with the surrounding water concentrating the force of the explosion on the target.

A crucial innovation was the addition of backspin, which caused the bomb to trail behind the dropping aircraft (decreasing the chance of that aircraft being damaged by the force of the explosion below), increased the range of the bomb, and also prevented it from moving away from the target wall as it sank.

After some initial scepticism, the Air Force accepted Walliss bouncing bomb (codenamed Upkeep) for attacks on the Möhne, Eder and Sorpe dams in the Ruhr Valley.

The Möhne (pictured above) and Eder dams were successfully breached, causing damage to German factories and disrupting hydro-electric power.