Kelso Racecourse hosts thirteen fixtures a year from January to May and October to December. The first recorded race meeting took place at Caverton Edge in 1734. Races were also later held at Blakelaw. The foundation stone of the stand at the current racetrack at Berrymoss was laid on 12th July 1822, and the original grandstand is still a feature of the track, dubbed 'Britain's Friendliest Racecourse'.

Kelso was a flat racing track until 1888, when the United Border Hunt moved to the course. Since then, Kelso has run exclusively under National Hunt rules.

It is manned by just three full-time groundstaff under the direction of clerk of the course Hazel Peplinski, who has been at Kelso since October 2011.

Extensive developments have taken place at the course in the last eighteen months, with substantial works on the track in summer 2012. 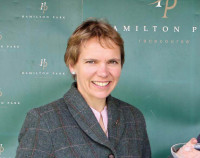 Hazel explains: "The main objective of the development was to create additional fresh ground for the hurdle track in the home straight, and the way we went about this resulted in some secondary benefits. We were able to use some new and improved sites for the last two flights of hurdles and we reduced the distance between the final chase fence and the winning post by half; it had previously been over two furlongs. Once we started on the modernisation process, it soon became clear that the ageing frames of the original permanent chase fences were beyond repair, so we commissioned Watt Fences to replace them all with sectional frames, designed to our own bespoke specification."

The track works altered the running line for the steeplechasers on their final circuit so that they now have their own winning post on the chase course, rather than by crossing the 'elbow' and finishing on the hurdle course. The photo finish tower and winning line were also adapted to operate a photo finish across the full width of the course.

Hazel comments that the benefits of the £46,000 development project are most appreciated in the deep winter months, at a time when getting the track back in shape between meetings challenges many racecourse grounds teams. 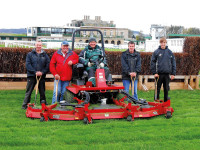 She continues: "There was understandable resistance from traditionalists to changing a much-loved character trait such as the 'elbow', but we felt that, in the light of new pressures imposed on the track by a growing fixture list and a modern race programme, it was worth reassessing Kelso's optimum use of the turf."

"Also, with regard to the welfare of the horse, we should constantly be asking ourselves whether or not our course design is still the most desirable, or if there is a need to modernise."

The new layout has increased flexibility of racing lines and siting hurdles considerably, and has also improved the consistency of the racing surface in the home straight and pull up area. It was introduced for the 2012-13 National Hunt season, and the practical advantages were immediately obvious.

"By removing the need for by-passing space close to the winning post on the chase course, there is now additional fresh ground for the hurdle course on that important section of the track. Modern race programmes put so much extra pressure on hurdle courses which also stage regular National Hunt Flat races. In an average year, hurdle field sizes are much larger than on the chase course," explains Hazel.

The dividing rail between the two tracks at the winning post now has more flexibility, with the removal of both the elbow and the chase fence in front of the stands which required by-passing space on its outer. Now there is an additional 15 metres of hurdle track width, which correlates to three extra meetings of fresh ground (with each requiring five metres). This also benefits spring fixtures and eases pressure on the irrigation regime.

"We did not need to water before the start of the autumn season and, in spring, the need for irrigation should be less since it is often the more damaged ground that dries out first and requires watering to prevent it becoming too rough," comments Hazel. "And, if we do have to irrigate, there will be less stress on the sward from the shock of cold water, as it is in better condition before we start."

The work has had a significant impact on the course presentation during the winter.

"Wear and tear on the ground would historically have been irrelevant with only six or seven days racing a year, some of which were two-day meetings, allowing plenty of time for recovery between fixtures," Hazel comments. "However, we now have fourteen fixtures a year, so recovery needs to be much quicker and the project has really assisted us in this respect. The track repair team after racedays immediately noticed the difference."

There were also changes to the fence layouts: a chase fence was removed from in front of the stands and the two open ditches were replaced by just one, which is now located as the first obstacle in the home straight, and has been re-orientated to head up the chase course rather than towards the former elbow.

"This juggle of fences also means the chase course can now host a two mile five and a half furlong distance, which augurs well for those horses that need a trip between two and three miles, previously uncatered for at Kelso," Hazel explains.

The new layout has added excitement to the racing for the paying public, as the quality of jumping in the final stages of the race has been made more significant by bringing both the final flight of hurdles and chase fence closer to the winning post. There is also a horse welfare element to this, as Hazel explains: "The final flight and fence were previously two furlongs away from the winning post, and horses inevitably had a hard race as, after the last, they slogged it up the long finishing straight."

Parade ring walkways have all been upgraded to be fully non-slip, with a £12,000 investment in Stablesoft's rubberised material which was laid in time for the 2012 season.

"They look a great deal tidier as well as being much safer," states Hazel.

A further £35,000 has been invested in drainage just after the home bend, on both tracks, at the point where the open ditch has been resited.

This includes a series of lateral drains into a refreshed main drain; supporting new sand slits were also installed across the racing surfaces to feed into the laterals.

"Certain areas on the hurdle course had a weaker sward and were slower to recover than the majority of the track so, in 2013, secondary drainage sand bands were installed over these poorer areas using a BLEC Sand-Master. It has been noticeable that these sand bands have had a tremendous effect on the recovery of these historically poorer patches," says Hazel.

Irrigation was also upgraded, with a new pump installed to the borehole which extracts water to a storage lagoon, at a cost of £12,000. "This pump has greatly increased the capacity of the lagoon when prolonged spells of irrigation are needed."

Much of the renovation work has been done by the groundstaff team, with the exception being the new sectional jumps which were built by Watt Fences. The fences were re-stuffed by head groundsman Brian Meikle in the summer of 2013 and now look "even better", comments Hazel.

Contractors Souters provided the Sand-Master and carry out the overseeding programmes.

Kelso has also made significant investment in machinery, including a new 95hp Kubota M9540 tractor with loader.

Brian Meikle explains: "The tractor is larger than the one we had previously, but it is on turf tyres and can be used for so many tasks. Its loader can be fitted with pallet forks, which makes it so much easier to manoeuvre the sections of the fences for repair or refurbishment. We previously had to use a forklift, which did a lot of damage to the turf."

The Kubota also pulls a new 2.8m Charterhouse Verti-Drain, bringing a job that was previously carried out by Souters in-house.

"It is so much more convenient, and means that we can vertidrain when conditions are right, rather than waiting for the contractor to be available," explains Brian. "We target specific areas of the course for treatment, and we vertidrained the take-offs and landings in the summer, which has made a big improvement. Due to all the sand and soil mix that has to be used, they had become very gritty, but are much better now."

Another invaluable addition is a six-wheel drive Polaris Ranger UTV, offering more capacity and a watertight toolbox to tackle a multitude of jobs on the course.

"We moved to ride-ons seven years ago," says Brian. "They are lighter on the course and the Groundsmaster's three decks give a better finish on the undulations than a tractor mower, whilst the blades lift the sward for a clean cut. A ride-on is also much more manoeuvrable around the fences. Our last cut was in November, as it was such a good autumn for growth, and it has left the turf in a really healthy condition."
The existing Cambridge roller has also been replaced with a new unit from DW Tomlin, and is used sparingly and in the right conditions to level the track. 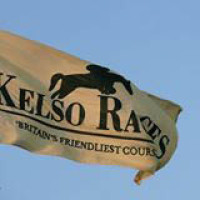 "The course is improving all the time," comments Brian. "I've been at Kelso eighteen years and it has never been so good - in fact, our former chairman, who was very particular about the condition of the turf, has commented on it."

Hazel continues: "The 2012-13 season was a real test of the developments. We had one abandonment due to the extreme weather but, without the work that we did, it would have been a lot more than that. Fresh ground recovers much more quickly from waterlogging."

Brian concludes: "Winning the RCA Racecourse Groundstaff of the Year award has meant a lot to our grounds team. The developments at Kelso have made a big difference to the course, but there are tough, cold and wet days ahead through the National Hunt season, so it is good that they can see that all the effort has been worth it."

Dedication to the job pays dividends

Head groundsman Brian Meikle has been at Kelso for eighteen years, and he and his wife, Gillian, who is also the course's caretaker, have dedicated their lives to their work at the racecourse, says Hazel.

"They always ensure a warm welcome to horsemen, going about their work with enthusiasm and dedication. They fully understand how important the detail is in the presentation of both the track and site on a raceday. Brian can see the track from a horseman's perspective, which is a rare and invaluable quality."

Hazel also comments on the extreme loyalty of the entire team, including raceday casuals.

"They are so dedicated, there is never an issue of someone not turning up."