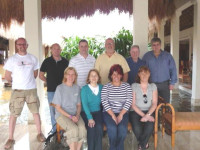 Sunny Mexico was the destination that Etesia's top European dealers headed for when they left behind a freezing cold January to take a well-earned luxury break in the warmer climes of Cancun. Hosted by Etesia, the vacation in one of the "Leading Hotels of the World" was star prize in the company's 2008 sales incentive.

During the event, Etesia took the opportunity to reveal to dealers some early preview details of a revolutionary new ride-on rotary which they plan to launch to the rest of the industry later in 2009.

Etesia's UK General Manager, Les Malin said, "It was a tremendous opportunity to meet and bond with our European counterparts - feedback was very positive. It was a great start to the year, particularly since our UK order books for 2009 are already showing a substantial increase on last season."