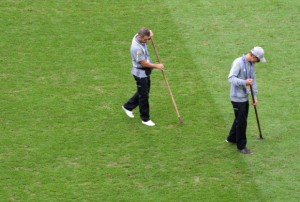 The nation's grass association has directed blame at Leeds-based consultant Richard Hayden after the host country came under fire as for sub-standard playing surfaces.

A war of words erupted after UEFA, the tournament's governing body, expressed concern on Friday about the state of pitches at the tournament, in particular in Marseille, Saint Denis - where the showcase Stade de France is located - and Lille.

There was further dismay on Sunday after France's game against Switzerland in Lille where groundsmen were forced at halftime to try to patch up a cut-up pitch at the Stade Pierre Mauroy as players slid repeatedly.

Such is the state of the Lille pitch that it being relaid after hosting just a handful of group games.

Mr Hayden, one of the world's greatest specialists on preparing pitches, was asked by UEFA to look at the French ones before Euro 2016 and he raised concerns about Lille, Nice and Marseilles, where the rock group AC/DC staged a concert less than a month before the tournament began.

Mr Hayden had reportedly ordered local groundsmen to relay these pitches with Slovakian grass provided by an Austrian company for an estimated €600,000 (£460,000).

However, the result has been such a fiasco that Martin Kallen, UEFA's tournament director, said: "The pitches should be better and we're not happy."

In response, the SGF turned the tables on UEFA, saying all the pitches in France's top tier had been deemed in "excellent condition" at the end of the last domestic league season.

"The organisers of the competition want to clear themselves of any responsibility by discrediting the highly qualified professionals, who are experts of French pitches," the French Grass Company (SFG), an association that encompasses all elements of the grass industry, said in a statement.

"This stance is at the very least scandalous, when we know these (experts) were systematically excluded in any of the decision-making process and their advice ignored," the SFG said.

Turning the blame on Mr Hayden, the SFG added: "The consultant mandated by UEFA believed it necessary to intervene, in particular by placing non-compatible grass from an Austrian firm in the Marseille, Lille and Nice stadiums … against the advice of French specialists.

"It is only these pitches that have problems today," the association said. "That must just be a coincidence."

Almost halfway through the month-long, 24-team tournament, the demands on pitches have never been greater at a European Championship. Some stadiums are hosting six games and wet weather across France is visibly having an impact.

Jean-Marc Lecourt, chairman of the French Society Lawns, said that his compatriots were "in no way responsible for the incompetence and the sabotage of the mercenaries employed for the event".

Ignoring the fact that Mr Hayden is Irish, Mr Lecourt said that it had been a mistake for UEFA to turn to "British gardeners" for the tournament. "Now we can see the limits of their competence."

Mr Hayden declined to comment when contacted by the The Times newspaper, but in a statement UEFA rejected the "completely baseless criticism directed at him throughout the tournament."

The best pitch in France is widely agreed to be the Parc des Princes in Paris. Paris Saint-Germain's groundsman is Jonathan Calderwood, a Briton.