Everton Football Club has submitted to Liverpool City Council an amendment to its planning application for a new 52,888-capacity stadium at Bramley-Moore Dock on Liverpool's waterfront. The amendment comes after the Club revealed the design changes to supporters last month and addresses feedback from statutory consultees to the original planning application submitted in December 2019. 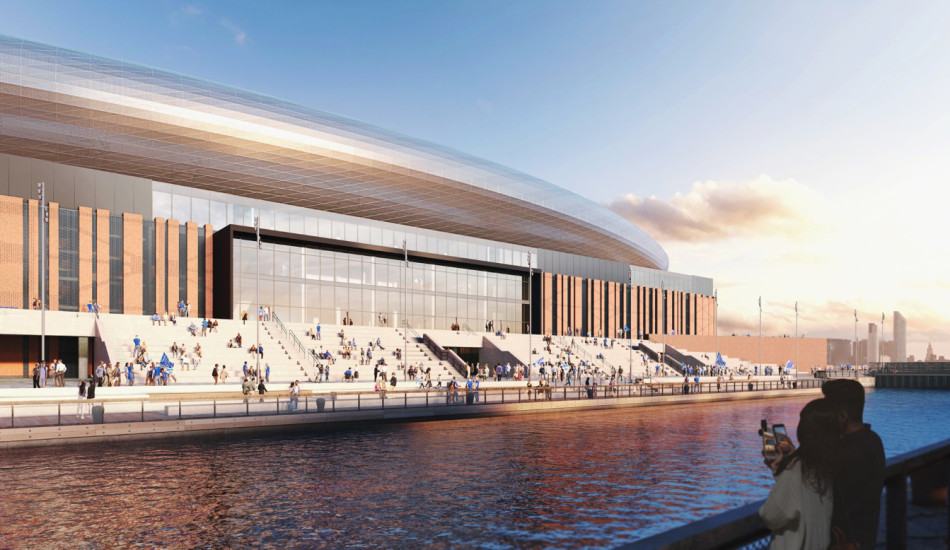 Everton's plans for the stadium, which will sit within Peel L&P's £5bn regeneration project, Liverpool Waters, and forms part of the city's newly launched North Shore vision, would have a transformational impact on North Liverpool. A new stadium and a legacy project at Goodison Park will act as a catalyst for the regeneration of the city's semi-derelict northern docklands, contributing a £1bn boost to the region's economy, creating up to 15,000 jobs and attracting 1.5m visitors to the city each year.

The most visual of the design improvements is around the West Stand (the stand facing the River Mersey) with the introduction of a new stepped plaza and the removal of the multi-storey car park. The changes will return symmetry to the building and will provide river views for supporters in the West Stand, as well as creating an exciting new stepped terrace public space within an area of the World Heritage Site, which is currently inaccessible to the local community and visitors alike. The stepped terrace will also provide a new covered area to protect supporters entering the West Stand turnstiles and lounge entrances from any inclement weather.

The solar panels originally proposed for the West Quay have been be relocated to the stadium roof, freeing up and decluttering the area for non-matchday use and providing parking for some of the Club's disabled supporters. The brick façade of the stadium has been simplified to make the tribute to the Archibald Leitch lattice work, that is so synonymous with Goodison Park, more obvious while the overall height of the stadium has been reduced so that it is defined as a 'mid-rise' building in line with Liverpool City Council's World Heritage Site Supplementary Planning Document.

Bramley-Moore Dock's location within Liverpool's UNESCO World Heritage Site and the Stanley Dock Conservation Area has been fundamental to how the project has been designed and planned. Working closely with Liverpool City Council, Historic England as well as other heritage bodies, the stadium has been designed to respect and preserve the heritage of the area, while bringing a long-standing semi-derelict dockland site back into productive use.

A water channel would be maintained to the west of the stadium to ensure the visual continuity of the dock system - a key feature of the Outstanding Universal Value of the World Heritage Site - with the historic dock wall on the western side of the channel exposed. The site's Grade II Listed Hydraulic Tower would be restored to create a unique visitor attraction, attracting tourists on non-matchdays, and a range of Bramley-Moore Dock's historic features, including capstans, mooring posts and old railway tracks, will be retained and restored within a high-quality public realm area.