There are no less than eight courses situated between St Annes and Liverpool, and many believe that this is the best stretch of links land in the British Isles. To date, Hillside Golf Club has staged numerous major events and now have the proud honour of hosting the British Masters 2019, as part of the European Tour.

In this exclusive interview, Lee Williams visited Chris Ball, Hillside's Links Manager, to gain an insight into the selection process and what developments are required to get the course ready to host the prestigious tournament.

What did the selection process involve for being chosen to hold the tournament?

In October last year, the European Tour approached us to host the British Masters for 2020. There had been a lot of negative press about the Masters not having a venue for 2019, so they came back to us to determine if we would be ready to host it this year. Tommy Fleetwood, who grew up in Southport and has playing rights at Hillside, had been approached to be the face of 2019 event. So, when they asked him which course he wanted to play on, the choice was an easy one. He said: "I can't wait to host the British Masters at Hillside, in my home town. It will be such an honour and I'm so grateful to have been asked."

"I'm extremely proud to follow the great ambassadors of our game who have hosted this tournament. I am very confident that Southport will make everyone welcome and the north west of England, and its love of golf, will embrace this opportunity and show support to us all."

When were you told you had been successful?

Obviously, the green staff had not been involved in the negotiation process, so when we were called into the office late October to ask how we felt about it, obviously we said, 'yes great, what year?' to which they replied, 'in about six months time'. Looking out from the clubhouse window at the time, the course looked ok but we still had very little grass cover, particularly on the fairways after the hottest summer on record. So, with the tournament scheduled for 9-12th May, we started to make the necessary plans in order to get the course ready for its biggest event ever. Most televised events probably know years in advance when they are hosting an event, but six months notice did bring a small smile to our faces … until reality hit! 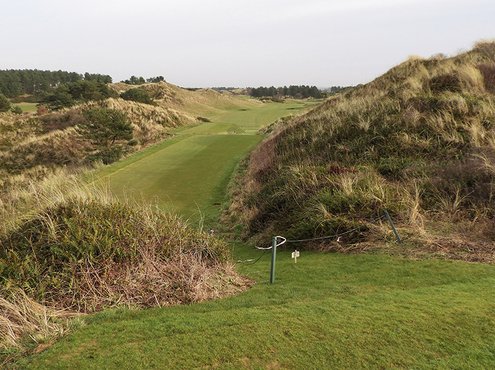 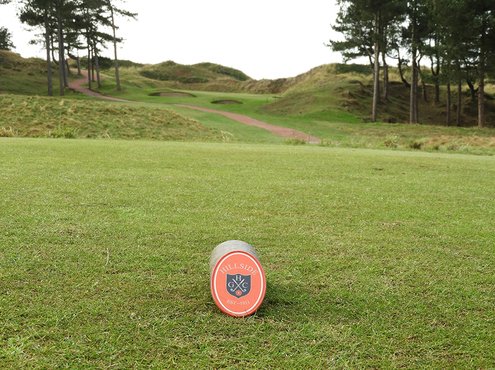 What are the main changes that need to be made to the course?

Hilliside is many people's favourite course along the coastline, but the question that has always been asked does it have the infrastructure and space to hold a major televised event? Whilst the back 9 has some enormous sand dunes, the front 9 and areas around the clubhouse are pretty tight for spectator routes. However, working alongside the European tour officials, who plan these events week in and week out, we've overcome these small issues without any difficulties.

The main development will be bunkers. As part of a winter renovations programme, Hillside have always had a bunker re-revetment policy where we choose to revet so many per year. When the tournament announcement was made, we had to revisit all the bunkers to ensure we hadn't missed any, and decide if we could we make any last another season (in order to concentrate on the more important ones). We had already identified this winter that some bunkers we're going to be redesigned, to make them better for general play and had to make those adjustments (now with some of the worlds best golfers in mind too). So far, we have already completed quite a few and made them more of a links nature; more user-friendly but maintaining the challenge aspect for accomplished golfers.

We also had major issues with the legacy of the drought damage at the end of last year. We were over-seeding many areas anyway and had budgeted accordingly, but once the event was announced we had to double our efforts.Working alongside the Tours agronomy department, the only real concerns were grass cover on the fairways. I remember being sat on a train to Edinburgh and receiving a phone call from Chris Williams (Hillside's Secretary/Manager), saying we've just ordered four more pallets of seed and we've just purchased a twin disc seeder from Campey's. This was late October/early November, Edinburgh had their Christmas markets built and we still had pallets of seed to get out onto the course.

We had also recognised early on that some areas were never going to recover and be ready for May, particularly around the tighter areas of the course, which meant we had to go around and turf-cut a vast amount of areas of drought damage. One thing that we didn't consider, was that local turf growers (and likewise probably countrywide), had also suffered the same drought, so we didn't have an unlimited amount of finishing turf that perhaps we may have done in years gone by. We've used dwarf rye in a few areas, that perhaps we wouldn't have done in the past, but it really is a case of needs must. It's funny as some of the lads who have been at the club for over ten years, have never experienced the level of drought damage we experienced last year, but thankfully those who have done the job for thirty years or more can remember a few occasions before full fairway irrigation was invented. In June, for example we held the Ladies Amateur Championship (also televised) and we were double-cutting greens in 30o heat whilst the surface was drying out, but thankfully we've come out the other side and, with some sensible inputs of liquid feeds, we are nearly there on the fairways.

Initially, the Tour team came and had a walk around with Tommy, as they wanted to get his input into the event as well as his opinion of the course. There are a lot of tees that very rarely get used, and Tommy recognised these as ones he wanted to use. The Tour players have always wanted to play Hillside under championship conditions and that's what we have to strive to achieve. By modern standards, it's not a particularly long course, and it's still over 7000 yards but, like most links courses, wind will be needed to offer the greatest test to the players and I'm sure if it's a nice day, there will be some low scores. During the walk, Tommy recognised that he wanted to use the elevated tees; after all, that's the wow factor of Hillside and the dunes are its biggest asset.

Has work commenced and what has been carried out so far?

Aside from the bunkers, and major repairs to a couple of Championship tees, the main change is with the 18th tee which was a real challenge it's always been a great finishing hole but we wanted to create a wow factor that any great championship finishing hole should have. We had a sand dune behind the 18th tee which provided a 360o view of the coast; something no other course has in this area, and Tommy really wanted the tee to be situated on it. Initial thoughts were that it would be tough to build in the timeframe but, after a few discussions with a local contractor, we set to work. The club were conscious that this was going to be a lasting legacy of the event therefore, we made it a bespoke construction project; it's sat in the dune (not above the dune) which means you can't see it until it's upon you.

It's not your regular rectangle tee, and it used a different skill set to construct, but it's really worked. The mindset was; how do we make this look natural and how do you not see it walking up to the 17th green (you can't miss the dune it's on, but you can't see the tee)? We didn't want you to see golfers just stood on a big hill, but the success of the construction means we can utilise the tee and offer future golfers the Masters experience. We are all really happy with the final result, as now it means people will get their cameras out on the 18th tee with the lasting impression of Hillside's final hole and the full panoramic view of both the course and coast line.

Have you employed additional staff, or will you closer to the event?

On the run-up to the event, we will need to employ experienced greenkeepers; who we can trust to be up to speed with the size of the event and also the equipment we have to all use, to ensure the course is looking its absolute best. With almost thirty years in the industry and so many great courses around Hillside, it was easy to call upon what is being called the 'dream team of greenkeeping volunteers'. From truly world class venues like Royal Birkdale and Formby, along with lads from Ireland, Cornwall and Gleneagles, we have a complete set of all the skills required. We have ten staff of our own and there will be a total of thirty volunteers, so I'm pretty confident this will be sufficient.

There must be an enormous amount of pressure for the course to look its best, how will you deal with that?

Over the past few years, the Club has employed fairway protection methods, which has meant golfers dropping to the semi-rough areas on all fairways. The plan was to practice this from December through to February, but as soon as the tournament was announced, we introduced it a month early.

It's going to be all about time management and planning. We recently made all the bunkers GUR, which has meant we've gained a lot of time that the lads were taking to rake bunkers each morning and we moved that time to other areas that need the attention. The club have been fantastic making some brave decisions, that maybe at first didn't go down to well with all the membership. The green committee gathered a team of divoting volunteers and helped in trimming hundreds of irrigation heads; anything to help keep the skilled greenkeepers doing the bunker and tee work. We can't thank the club enough for there help. 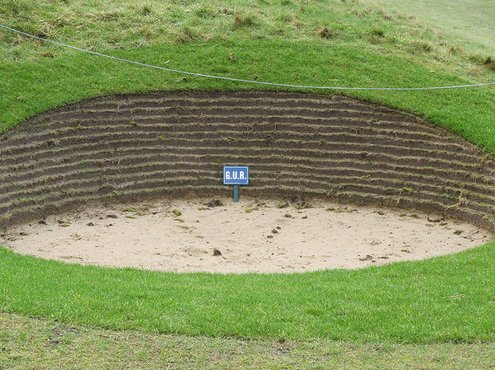 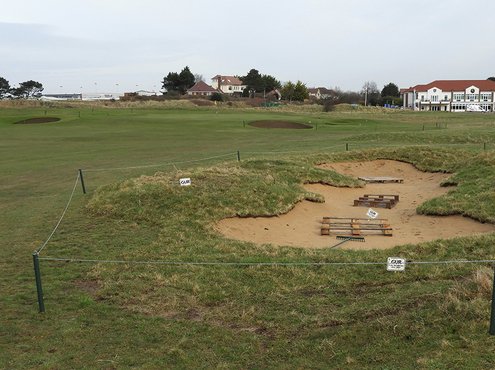 John Deere are going to be a major support for machinery, and they will bring in all the additional equipment required including hand mowers, fairway mowers, greens mowers, rollers etc. We're already trying out different machines to determine which best suit the course and event.

We've all worked Open qualifier and top amateur events before, but none of us have faced a 2 tee start for a full field of 156 professionals, for seven days. The speed at which we need to get the course prepared for play each day requires some serious thought from the team. We will need every one of the forty staff to get the job done. The weather will dictate a lot of it too.

Tommy wanted to make the course interesting, in a bid to promote exciting golf, so that's obviously at the forefront of our minds. Many more meetings lie ahead, and Mother Nature will no doubt throw something interesting at us. I think most people will admit that May is never a good time for golf courses with the seed heads, but we are ready for whatever comes our way.

We will be following Chris and his team in the run-up to the event, to cover all aspects of the preparation and developments on the course. Watch out for these exclusive articles on Pitchcare.com and our social media.