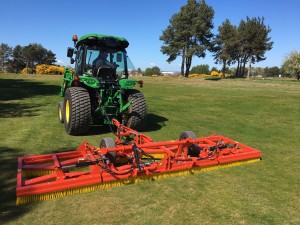 A golf club celebrating its bicentenary this year has taken delivery of a double width Wiedenmann Terra Brush.

Scotscraig Golf Club is the world's 13th oldest course and was founded in 1817 by members of the St Andrews Society of Golfers. Just 15 minutes north of St Andrews, it features a championship course in a traditional loop, influenced firstly by Old Tom Morris and later by James Braid.

Course Manager, Chris Barnard, and his greenkeeping team of five have newly finished an intensive two year renovation project which reinstated many original features of the famous links and heathlands layout.

Chris Barnard said: "We've wanted a brush for a while. Last year we improvised and fashioned one ourselves but it didn't quite do the job. We chose the Terra Brush with folding wings, and yellow bristles, the firmest ones, because it suited our situation best.

"Its arrival coincided with just 9mm of rain in nine weeks so we took immediate advantage of a dry course, though careful to avoid drought stressed turf."

The Wiedenmann Terra Brush comes with four rows of bristles, two rows aligned perpendicular to the direction of travel and two in a zig zag formation, making it ideal for intensive and even brushing. On large area such as fairways, the wings can be deployed to extend the working width to 3.95 m. 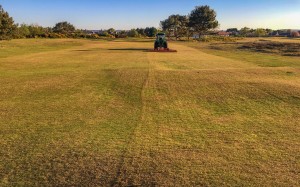 "Stiff bristles help lift matted areas of the Sheep Fescue fairway sward as well as pulling out dead or dying foliage prior to mowing. In the last few weeks there's been increasing amount of seeding on greens by the Annual Meadowgrass. We've brushed it to stand it up then immediately cut off as much as possible. The brushing has the added benefit of standing up any other lateral growth prior to mowing. Continual brushing means we remove the need to verticut almost completely, detrimental to our good grasses if done too frequently." continued Chris Barnard.

"Here we have a predominantly Fescue and Bent sward and the bristles help to stand up the grass better and give it a more polished look. The brush will also be a valuable tool in spring, prior to growth starting, as we can use it to create definition around the fairways."

The team at Scotscraig GC plans to groom all over with their new brush including tees and greens. Gareth Rogers, Area Sales Manager for Fairways GM, Wiedenmann UK's dealer for Scotland, helped install the new Terra Brush.