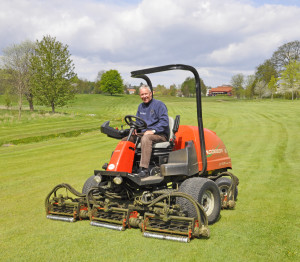 This new five reel light fairway mower complements his two existing Jacobsen LF3800 mowers and allows him and his team to mow all the club's fairways in just two hours. He also runs Jacobsen HR5111s to maintain the rough and semi-rough.

"When I first arrived here back in 2000 the presentation of the course was quite poor, as a result of an intensive preparation programme the previous year for a tournament featuring Tiger Woods.

The greens and fairways were particularly affected so it was an education process, with both the board and the members, to get an understanding that it could improve substantially.

"Ron Kirby is the consulting architect here and he created a Master Plan for course improvements.

One of the first purchases was the Jacobsen LF3800s, which had an immediate impact on the fairways and that's why we've just upgraded to its latest incarnation, the LF570; they're excellent machines that just run and run.

Using the three machines we can cut all 18 fairways in just two hours."

Tomlinson, who missed out on a football career with Leeds United due to a serious knee injury, is a hugely experience greenkeeping professional having worked in Europe since 1981. He began his career in 1975 at Scarcroft Golf Club near Leeds, rising through the ranks to first assistant.

In 1981 his European adventure began in earnest when he joined Lausanne Golf Club as a consultant, to help prepare for the World Championship in 1982.

He returned to the UK in 1983 to Moor Allerton Golf Club, the 27-hole complex designed by Robert Trent Jones Snr, where he prepared the course for a European Tour event won by Seve Ballesteros.

In 1984 he returned to Switzerland once again as course manager at Lausanne Golf Club where he stayed for the next 13 years.

During his tenure in Switzerland he was an influential figure organising the national greenkeepers' golf championship and educational days that eventually became the Swiss Greenkeeping Association.

He is now an honorary member and continues to have close ties with many current course managers.

1997 saw a return to the UK to take up the post of course manager at Nuneaton Golf Club, but after a three-year term he became increasingly disillusioned with golf in the UK.

He was offered the position of course manager at Rungsted Golf Club and just three weeks after starting, staged the SAS Invitational.

"The course here is one of the most famous in Denmark, having been designed by Major Charles A. MacKenzie, the brother of the more famous Dr Alister MacKenzie, in 1936," Ian Tomlinson added.

"It was formed by a breakaway group of members from Copenhagen Golf Club, who relocated five miles along the coast. Over time, it has developed into one of the very best in Europe and has hosted many national and International championships."