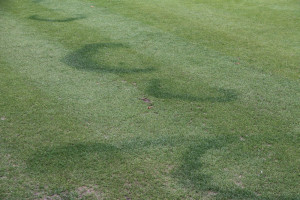 Fairy rings are today one of the most common diseases encountered by groundsmen and greenkeepers alike, and most will have experienced them under their supervision.

It is an unsightly and annoying blight on any sports turf playing surface, but the damage that these rings can cause depends on their type, location, biological environment and abundance.

Fairy rings are generally caused by fungi that are a part of the basidiomycetes genus. There are more than 50 fungi known to cause similar reactions though. When the disease first appears, it is important to correctly identify the symptoms, as there are three types of fairy rings to be found in amenity sports turf in this country:

Type 1 fairy rings are defined as those that cause loss of turf cover through the creation of hydrophobic (water repellent) conditions. A by-product of the fungal infection causes this condition by coating the soil particles within the area with a waxy layer. The disease usually occurs during early summer and autumn when soil conditions and mild temperatures are most favourable. The most noticeable feature of this particular disease is a clear ring of dead/dying grass. This dead zone is surrounded on the inside and outside by stimulated lush green grass, a direct result of the mycelium in the soil, and may also contain some small mushrooms. As this mycelium is extremely hydrophobic, any water applied will not infiltrate the surface or reach the root system in the affected area.

The fungus, Marasmius oreades, is at its most dense under the bare areas and can be up to 1m deep. As a consequence, the plant becomes stressed and dies leaving a characteristic bare patch for the invasion of other turf related problems such as weeds, algae and moss. The lush green growth around the dead zone is a result of the release of nitrogen from the organic matter in the thatch, and soil below, which is caused by saprobiotic and nitrifying bacteria within the fairy ring.

Type 2 rings are those that produce a stimulated ring of grass growth. This is obviously most noticeable in weak or stressed turf. They do not cause any direct damage to the turf but produce white puff balls that can impede ball roll on putting surfaces. Type 2 fairy rings are usually confined to the thatch layer, whilst lush green growth is produced in the same way as with type 1 fairy rings. A type 2 ring has a marked effect on the visual quality of the infected area, but does not harm the individual grass plant or the playing quality of the turf. 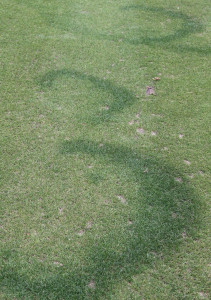 Type 3 rings produce mushrooms or toadstools that form with little effect to the individual grass plant. There are no signs of bare patches or lush growth. They tend to occur in areas that are poorly drained or that have received a large amount of rainfall or irrigation in a short period of time.

In sports turf, pathogenic fungi are generally present in the thatch and soil, but disease tends to occur when environmental conditions are favourable. Therefore, good cultural practices and management skills can prevent disease from developing. Unpredictable weather patterns and poor judgement can result in outbreaks occurring in a matter of days.

What is involved within an integrated management process that can be attributed to the specific problem of fairy rings?

As with most other problems associated within the sports turf industry, ensuring a healthy soil, as well as sward, is paramount. Regular aeration using solid tines, hollow coring and spiking at differing depths throughout the season provides a de-compacted surface that can aid drainage. Shattering the soil profile is very important to ensure the hydraulic conductivity of the soil is maintained. Increasing the pore space between soil particles allows more moisture to connect with the soil particles and be held throughout the profile (particularly in those soils with a high cation exchange capacity).

As the basidiomycete genus is generally found within the thatch layer, complementing your aeration control programme with an effective, and regular, topdressing programme can help breakdown the organic layer within the O and A horizons of the soil profile. This also allows more effective infiltration of moisture. With a reduced level of moisture and organic material, the mycelium has less chance of establishing and proliferating within the profile. The utilisation of controlled frequency verticutting and deep scarification during periods of good recovery will also further reduce the organic content within the thatch layer.

In terms of chemical prevention, it is important to think of the input in conjunction with cultural controls. Of the fungicide groups available, the strobilurin and azole groups can provide effective preventative control if utilised during periods of known or expected stress. Whatever fungicides are chosen, the active ingredient should be switched every few applications to reduce the chance of resistance occurring.

The use of a wetting agent is important during drier months. As the type 1 and 2 fairy rings initiate a hydrophobic environment, ensuring a soil remains moist during summer months is important. These two inputs are not a miracle preventative cure on their own, though. Utilising these factors, in conjunction with good cultural practice, is key. In fact, good aeration and thatch removal processes can aid penetrant wetting agents, when used with fungicides, to reach areas of the soil where fungi are normally left untouched.

Essentially, an integrated programme brings together a multitude of practices to produce the most competitive grass sward possible, thereby reducing the efficacy of potentially pathogenic fungi. It comes down to the potential of reducing the risk of attack. Obviously, programmes will be site specific as there are different challenges from one site to another. However, recognising when is best to employ given protocols is a skill that is learnt from experience or with the help of sound technical advice. 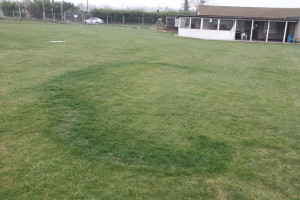 What do I do if I already have/inherit fairy rings?
If the fairy rings have already taken hold, there are still control methods available. The most important factor at this point is to identify what type of fairy ring your course/pitch is afflicted with. As type 3 fairy rings are mainly aesthetic, their ability to reduce the aesthetic quality of turf can be decreased by physical removal of mushrooms/toadstools. However, for type 1 and 2 fairy rings, there are many options available for effective control.

The best method of control for many is to ensure the soil remains moist, to effectively try and 'blend in' the growth of the sward and affected areas. The best way of doing this is through wetting agents during the summer, and efficient irrigation. Quite often, if left to dry out, a type 2 fairy ring will become 'silvery' in colour.

Ensuring a good watering regime should reduce the effect of this discolouration, removing the obvious difference in colour. It is important to remember, at all times, to only water to the grass plant's requirements to reduce the likelihood of other problems within the sward. Hand-watering is preferential to automatic irrigation systems in these instances. Similarly, they can be 'masked' within a playing surface through the use of fertilisers. In periods of stimulated growth, iron should be used to provide colour without excessive vegetative growth.

For type 1 fairy rings, the management practices are similar. However, the death of turf within the ring means that sometimes more radical approaches may be required, once established. One school of thought is that fairy rings are anatagonistic to each other, meaning if you mixed the mycelium, new fairy rings should not be produced. However, this has been met with some mixed results. In most situations, it can be more effective to dig out and completely remove the infected turf and soil to a depth of approximately 30 centimetres. Some advise sterilising the soil replacement, but the results of this treatment are again mixed.

In summary, as with most things in life, the best method of controlling disease is through a policy of moderation. Producing effective irrigation, fertilisation and aeration practices without going to excess should provide a good platform for a healthy sward, and playability for that matter. Utilising all of these in an integrated approach is therefore an excellent method for reducing the likelihood of fungal attack. In case of fairy ring establishment, there are still management practices available to reduce the severity of the problem and the effects on playability and aesthetic quality of sportsturf.