by Chris McCullough
in Synthetics and Football
on 16 May 2018

0 Fake turf has true benefits for the Crues...

It's a football club with a colourful and somewhat dramatic history but Crusaders Football Club in North Belfast is currently flying. The energetic club is currently sitting at the top of the Northern Ireland Football League Premiership and is being tipped to win the league, even by opposing team managers; such is the quality of play from the team. 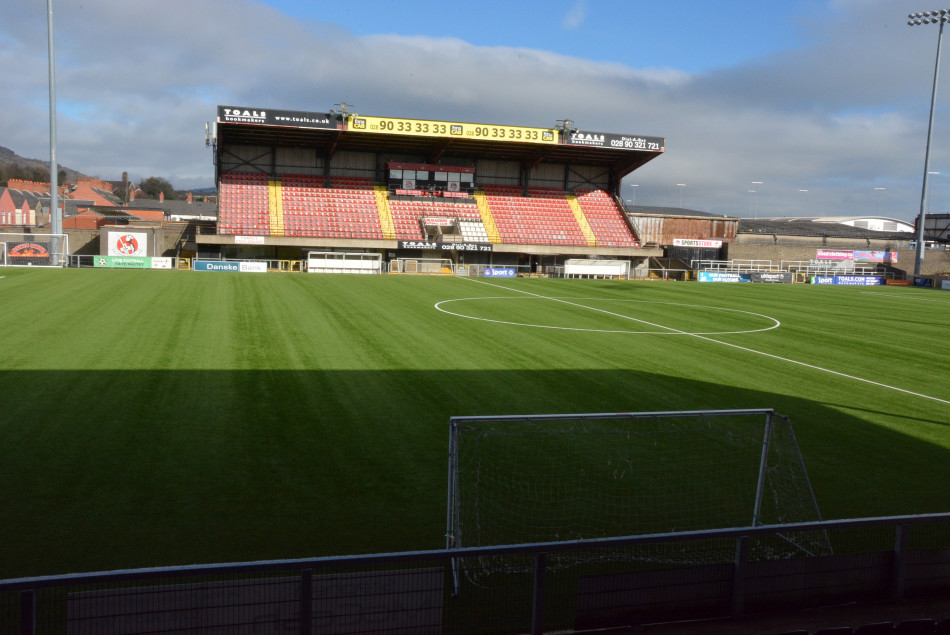 Home for Crusaders FC is the well known Seaview Park sited in a quiet residential area a short distance away from the Belfast Docks. The stadium is located just two miles north of Belfast City Centre, sandwiched in a thin wedge of land between the A2 Shore Road and the Belfast to Larne railway line.

With a seating capacity of just under 3,400, Seaview Park is a popular venue and has big plans to expand.

The club has around 1,500 season ticket holders who all seem to come out and cheer the 'Crues', as they are more commonly known, on to victory.

Whilst the club may be steeped in tradition, the pitch at Seaview Park is far from traditional. Back in 2009, Crusaders FC took the decision to install a 3G pitch which, at the time, was a real talking point, not only for the club but amongst the Northern Ireland league players and managers.

Even though it wasn't the first 3G pitch installed at a football ground in Northern Ireland, it was the first of its type to be installed in an Irish League team ground. Seaview Park was transformed for the better, although it did take some getting used to by the groundsman and the players. 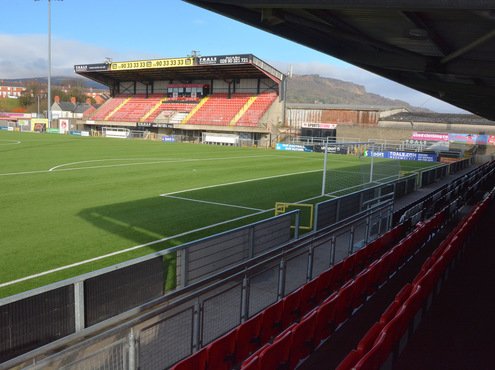 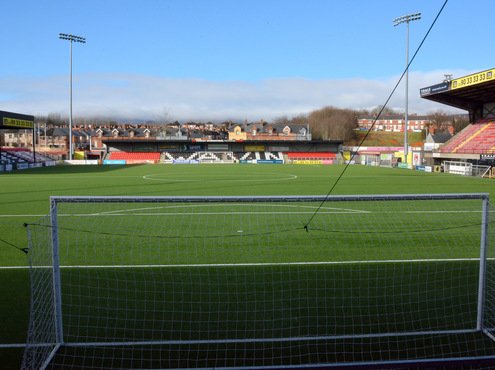 The club works closely with the local community and hosts a number of schools and other groups that use the facilities. Local youth team Newington Youth Football Club is just one of the organisations that play regularly at Seaview Park.

As mentioned, this club is steeped in history. Looking back, Crusaders Football and Athletic Club was formed over 120 years ago in 1896. The first meeting of the club is believed to have been held at 182 North Queen Street, Belfast, the home of Thomas Palmer who, along with James McEldowney, John Hume and Thomas Wade, was a member of the original committee.

At the time of formation, it was proving very difficult to decide on the name of the club. Many names were suggested including Rowan Star, Cultra United, Queen's Rovers, Mervue Wanderers and Lilliputians.

Committee member Thomas Wade felt that a name of more international significance should be adopted and it was he who suggested 'Crusaders' after the medieval Christian knights.

During the first years, the club was only able to undertake friendly fixtures until they were admitted to some of the local junior Alliance Leagues. 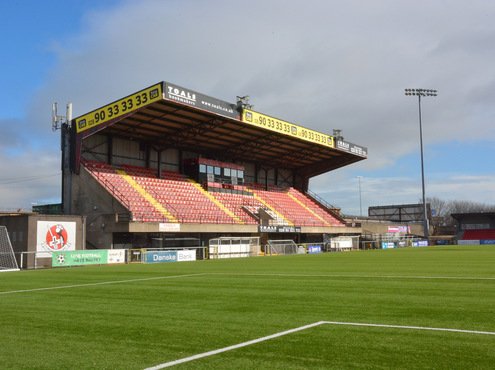 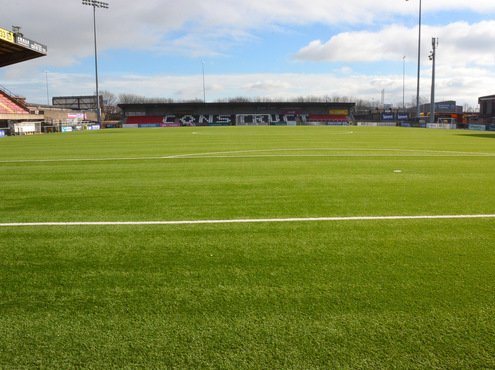 However, there was a strict no pay no play policy for players who wanted a game in those days. Players were compelled to pay a match fee of two old pence before they could take the field.

There have been a number of changes over the years at Seaview Park including the first stadium in the Irish League to install a 3G pitch. This historic event took place in 2009 and a new floodlighting system was installed at the same time.

During the 2010 to 2011 season, the club embarked on the next stage of the redevelopment of Seaview Park and constructed two new stands at the Railway End and the Shore Road End as well as the installation of seats in the old 'unreserved' stand.

One of the most popular features is the mural that graces the corner of St Vincent Street which is where the main entrance to the stadium is located. 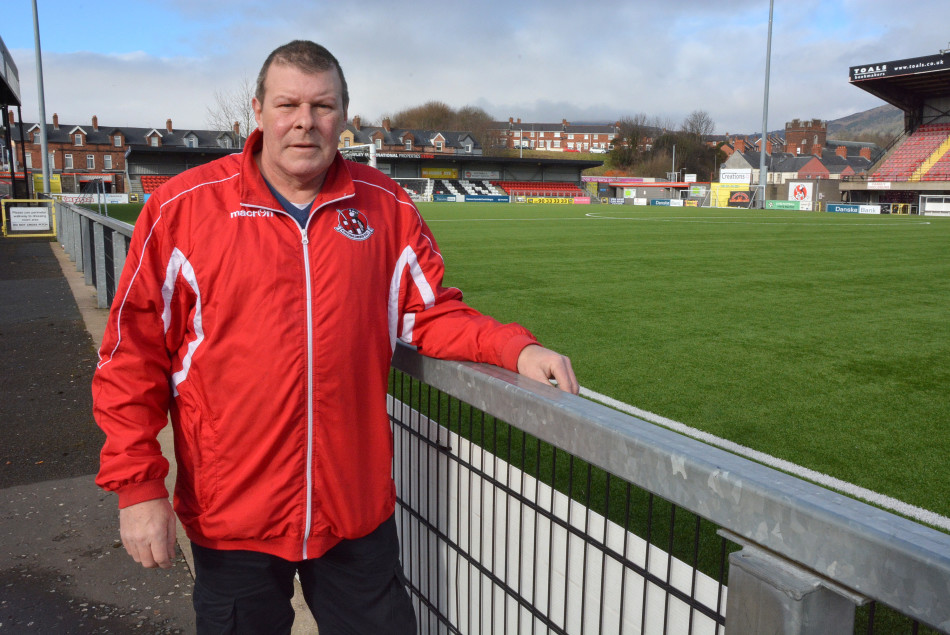 After spending many years working as a labourer on building sites, John was introduced to groundcare by the previous groundsman at Crusaders FC.

"I had been working on the sites around Belfast and later was asked to help out at Seaview Park with the previous groundsman," said John. "Working in groundcare was not a path that I had ever thought about, but it was one that found me in the end. During my 'work experience' the groundsman became unwell and could not return to work."

"The club asked me if I would step in and take over both the stadium and the pitch. I was just starting at the same time the first 3G pitch had been installed and, to be honest, knew nothing about the artificial pitches at that time."

"I learned very quickly how to look after the 3G pitch and have taken some training courses over the years to top up my skills. I was even sent over to Kilmarnock Football Club to look at the 3G pitch there and learn from it," he said.

The current artificial pitch at Seaview Park has been installed for the past two years; it replaced the original pitch which lasted almost seven years.

John said: "The lifespan of an artificial pitch is somewhere in the region of five years, but our first one stayed in place a little longer than it should have." 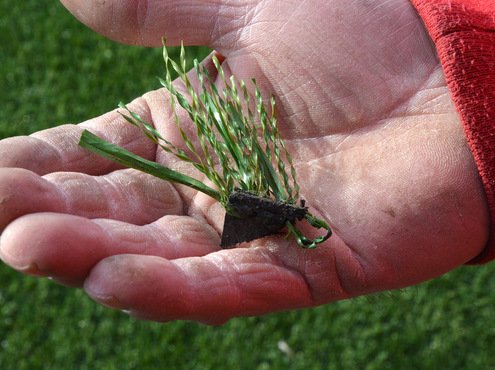 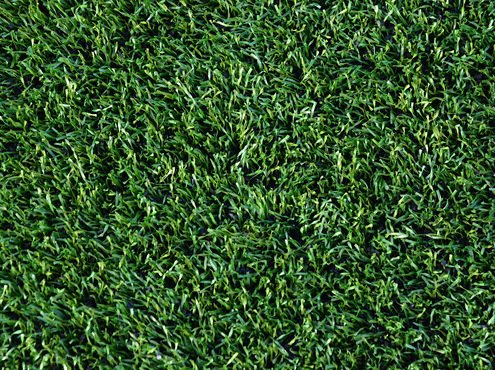 "This current one is a much more modern one and was installed professionally by Richardsons at a cost of £140,000. It should last up to eight years with the correct management and maintenance."

"Replacing the pitch after the original site preparation work was finished is a relatively easy job. It was laid down in four metre wide strips the full width of the pitch."

"The artificial grass sits on top of a 10 to 20mm thick shock pad which is resting on the tarmac surface. Once the grass is in place, it is kept there with a layer of sand. On top of that, there's thousands of little rubber pellets sprayed all over the grass which gives it an extra cushion."

"Players are not allowed to use metal studs on this pitch, but it's common that most players have extra sets of studs to suit both real and artificial pitches."

John works six hours a day at Seaview Park and his maintenance routine is perfected to the last second. Helped by one other member of staff, John is responsible for the pitch and also keeping the stands clean and tidy.

"I normally brush the pitch every 25 to 30 hours just to even out the rubber crumb which flattens down when it rains. A fresh run of brushing also levels the crumb out again, especially after heavy use which can leave the crumb displaced."

"There is a regulatory 2.5m run-off right around the pitch which allows us an area to turn when brushing and is also an area where the rubber crumb gathers." 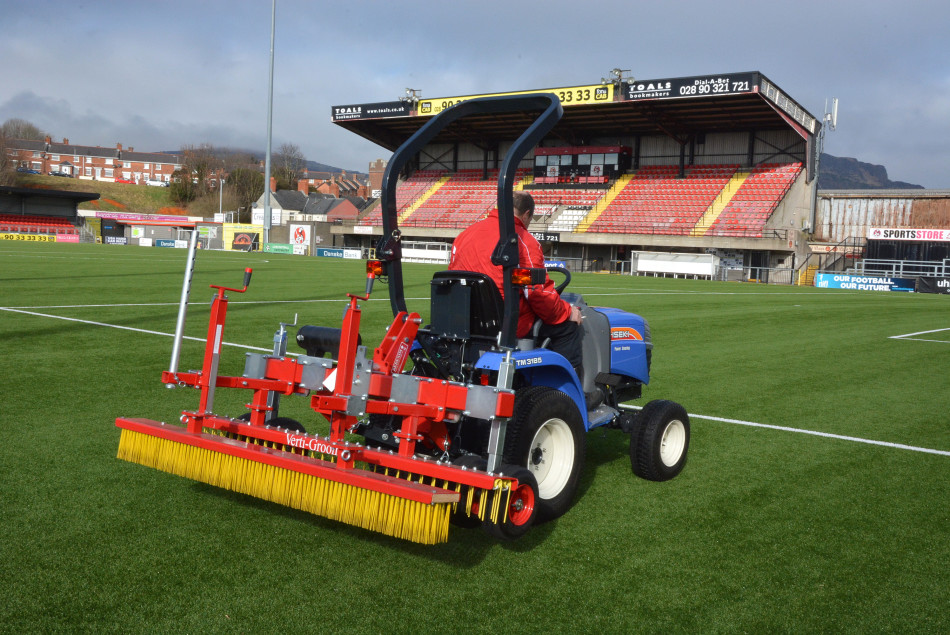 "I use an Iseki diesel tractor and a Redexim Verti-Groom to brush the pitch which takes around three to four hours each time. Special attention is paid around the corner flags, penalty spot and goalmouths where there is extra concentrated displacement of the crumb during games."

"Keeping the stands and turnstiles clean are my other priorities, which also takes some time. We have four areas for fans, three seated areas and one standing terrace which all have to be power washed periodically," added John.

Pests aren't really a problem on the 3G pitch at Seaview Park but there are other issues that make John's work that little bit tougher.

"We do have the odd pigeon that lands on the pitch as well as smaller birds that come down just after brushing the rubber pellets to investigate."

"However, the biggest bane on the workload here is the number of trees surrounding the pitch. Leaves blow onto the pitch and get tangled up in the fibres of the artificial turf. But one of the bigger problems is when the leaves gather on top of the roofs of the stands and then blow down onto the pitch in one go. Now that's annoying," said John. 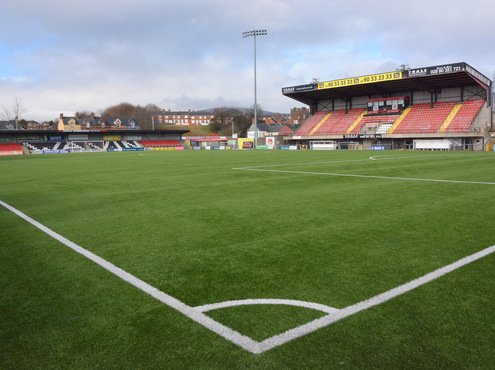 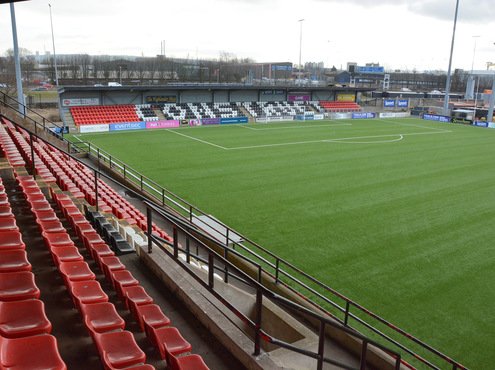 "Sometimes, there is a little bit of line dancing going on as the pitch moves from time to time, depending on weather and game frequencies. All the lines are permanently marked on the artificial surface so, if the pitch surface moves, then so too do the lines," he said.

Crusaders FC has plans in place to further develop Seaview Park with the addition of more floodlights and a new stand the full length of the pitch.

"This will mean replacing the current stand on the St. Vincent Road side and extending it right along the pitch. New offices will be developed as well as part of the stand development as well."

"We have already had some test holes drilled to check out the site and we hope to start the work later on in the year. Money has been set aside by the club for these new developments and also by the Northern Ireland government."

"However, with the current stalemate in our politics, it is not known exactly when this money from the government will be made available. They need to sort themselves out so we can move forward, not only here at Seaview Park but in general in the entire country," he said. 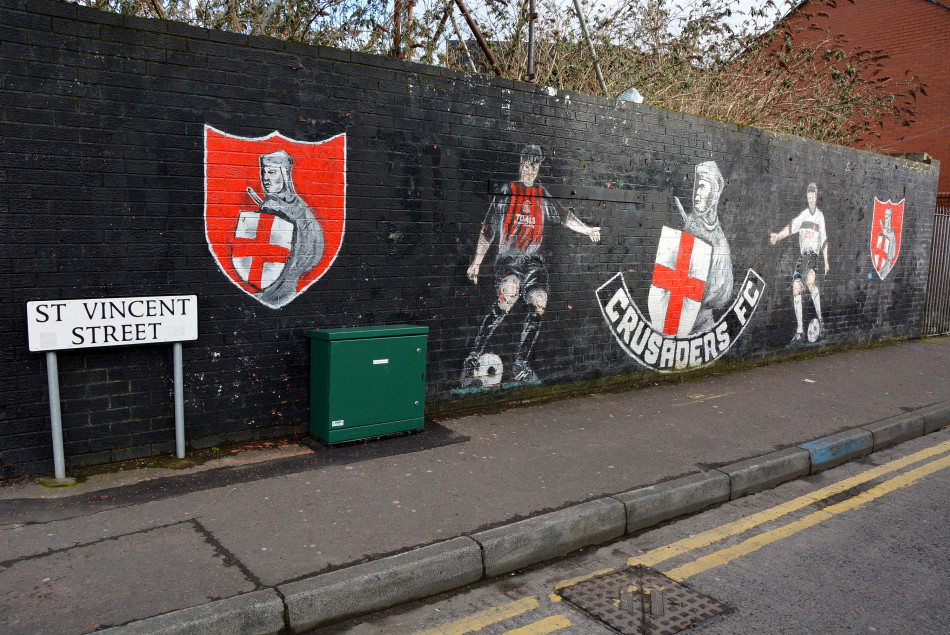 The use of artificial pitches can be quite controversial among the players, managers and fans, especially at top level clubs, with some saying real grass should be the playing surface of choice. However, at Seaview Park, the pitch has mostly been praised by home and visiting players alike.

"It's not to everyone's taste," said John. "The one we have here is well laid and is a good playing surface. At the beginning, there were some concerns from players, but most of the players and team managers that come here praise the quality of this pitch."

"Indeed, some other clubs in the League have visited us to look at the pitch more closely to see if an artificial pitch would suit their stadiums."

"The pitch is in use on an almost daily basis by Crusaders and also the numerous community groups and schools that use it. It is wearing well, but it is also looked after well," he said. "Since starting here, I have seen exactly how hard groundcare professionals have to work in order to maintain a good pitch and stands for the fans and players."

"It is an enjoyable job and one that requires a great deal of dedication and passion for the pitch and club. I wasn't really involved with any football club in Northern Ireland until I started with Crusaders FC and, of course, now I am a fan of the Crues, who are doing really well at the moment," concluded John.