0 Fakenham Racecourse - Following its own track!

Independently managed, Fakenham Racecourse sits on the banks of the River Wensum opposite the Norfolk market town. It benefits from tradition and a strong local following, along with the creative ideas of its young head groundsman. Jane Carley went to check out this forward thinking course. 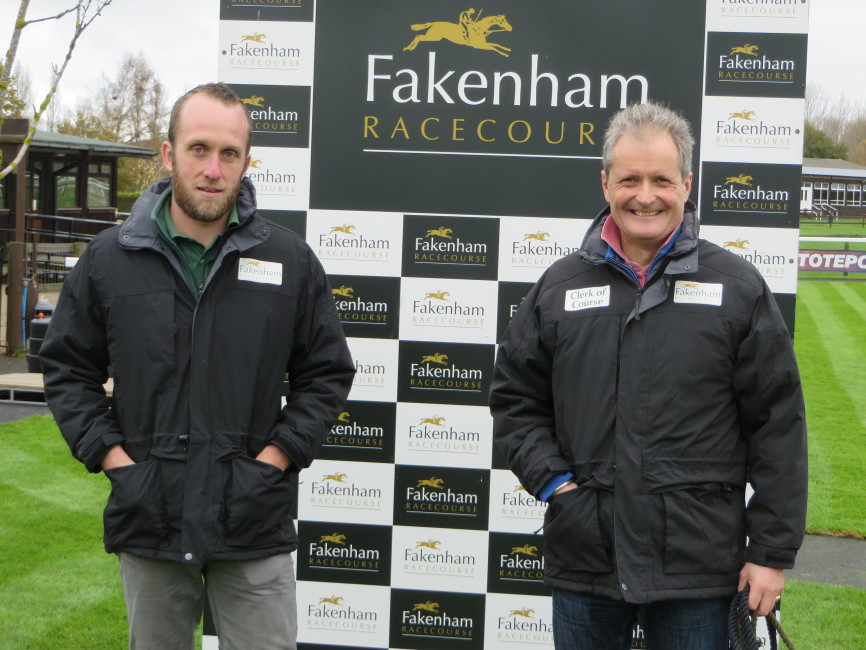 Founded at its present location in 1905, Fakenham Racecourse was originally run by the West Norfolk Hunt Club. When racing moved from its previous site at East Winch to take advantage of the better ground at Fakenham, one concern was how to keep the public out!

There's a very different feel today - the independently run racecourse is very much part of the community with part of the site let to a sports club, whilst two hundred caravan spaces affiliated to the Caravan Club allow a wider group of visitors to enjoy the great outdoors year-round.

Racing runs from October to June, with the most popular meetings being New Year's Day, Easter Monday, Ladies Day in June and the season opener in October.

Now based around a one mile round sharp left handed track, racing at Fakenham comprises thirteen National Hunt meetings, plus the West Norfolk point-to-point.

"There are few trainers locally, but we seem to attract horses from far and wide - six came over from Ireland for our first November meeting," comments Chief Executive and Clerk of the Course David Hunter. "We aim to present the best ground possible and be true to the going prediction that we have given. Prize money has also increased for 2018 to £800,000, up twenty-six percent."

Racedays have doubled since David came to the course nineteen years ago, and portable fences allow Head Groundsman Matthew King and his team to relocate them to fresh ground whilst allowing the worn turf to recover. 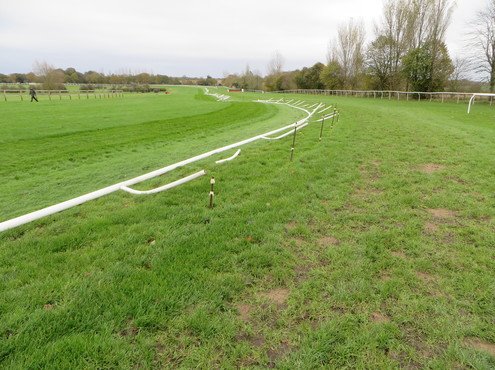 "It can be challenging as we race in the depths of winter," admits David. "The soils are loam over sand and shingle, so wet weather is rarely a problem and we have only lost one day to waterlogging in the time that I have been here. But frost and snow, alongside the cold north-easterly winds, can be an issue. Although winters have been milder recently, we abandoned two meetings in January 2017 due to snow and ice."

The free-draining ground means that irrigation is essential, and Fakenham has a 22.5 million gallon extraction licence for its borehole.

"We can irrigate from 1st March to 31st October, and there are five race meetings in that period," explains Matthew. "But we always have to be aware of the limits on the amount of water available."

Two reels operate rain guns - booms would be unsuitable in the windy conditions - with sprinklers on the bends.

"I'm looking to add another reel so that we have the three sharper bends covered. We can put on a lot of water in a short space of time, as late as the evening before racing if necessary. It's not a matter of 'little and often' here due to the restrictions on volume."

The ring main has recently been updated, and a generator repositioned away from the course buildings after a mains electricity update.

"The generator has replaced an old Leyland bus engine which powered the borehole pump and will give us the power to pump to three reels," comments David. "It will be more reliable so that Matthew can operate the irrigation system from his phone for overnight watering without worrying about it breaking down! The new system should be able to put on 5cm of water in twenty-four hours rather than the thirty-six hours that it takes now." 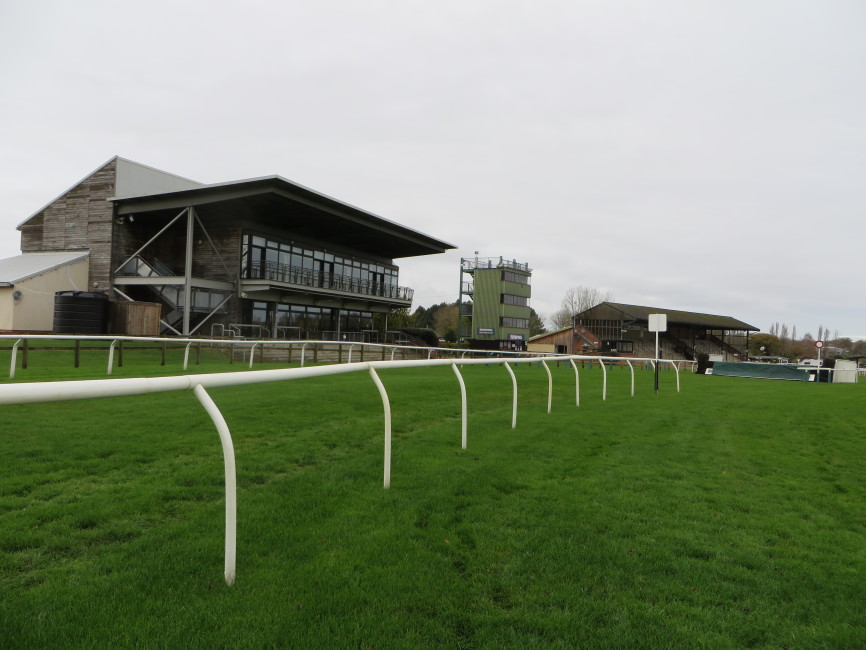 Drainage has been upgraded in recent years to address the few wet areas, with new land drains and sand slits on the bend into the back straight, followed by more land drains on the rolling land before the home turn.

With just the one mile round circuit at their disposal, wear to the bends requires constant management and repair.

"We source pre-graded, clean soil from Banks Amenity, which is similar to the local soil and pay close attention to the quality of repairs," comments David. "Rather than using contractor gangs, we employ local retired men who divide their time between us and working on shoots. They take a lot of pride in the repairs and we only work in optimum weather conditions."

Before infilling, damaged areas are lightly rolled with a ring roller. Up to thirty tonnes of topsoil is dispensed from a trailer adapted to Matthew's design.

"It's an old topdresser body, so it has two additional wheels between the axle which help to roll in the soil, combining two jobs in one," he explains. 'It can take three days to put the course back, but it's important to do it right."

A break of four and a half months in the summer allows time for the track to recover and for more intensive renovations.

"We mow down to 5cm and then remove the clippings with a hired-in Trilo, before composting them for future use," explains Matthew. "I'll also address any areas in front of fences that have built up or need re-seeding." A review of mowing equipment has led to the purchase of a Trimax Snake, which gives a quality cut and can be pulled by a compact tractor

Even with portables, repairing take-off and landing areas of fences is an important task, and Matthew has again applied his engineering skills to developing a lighting rig to encourage germination of fresh turf.

"It's still in development - we needed a stronger rig than is used in football stadia because of the winds out on the course. The rig is currently mains powered, but I'm adapting it to run off a generator so it can be used on the back straight where there is no power."

The lamps came from an interesting source - on the advice of a local football club, Matthew approached the police force who supplied lighting previously confiscated from a cannabis grower!

A disc seeder is hired in to overseed any worn areas in spring and autumn, and slow release organic based spring fertiliser is followed by agricultural blends through the summer and more slow release products to take the sward through the winter.

Matthew has also directed a move away from larger tractors, with the latest purchase being a John Deere 4R series compact which pulls the mower and tows one small irrigation reel.

"We wanted to keep large tractors off the track as much as possible, so investigated equipment that can be handled by compacts."

"Mowing was of special concern as we can be out on the track three times a week in the spring. It took a bit of research to find a suitable mower as British Horseracing Authority guidance has always been to use a front mounted mower on a tractor or a self-propelled machine," he says.

David comments that many of the racecourse's committee are farmers with extensive experience of machinery and their feeling was that not only was a front mounted implement less balanced, but the costs of front linkage and pto outweighed any benefits.

Until recently, a self-propelled WAM was used, but Matthew felt that cut quality could be improved. "The latest generation of tractor mounted mowers have specially designed decks that produce the updraft to take wheel marks out and give a high quality cut," he explains. "We opted for the Trimax Snake, as it is small and compact enough to mow around jumps."

David adds: "We only have eighteen acres of racing surface, so we don't need a big mower - the Trimax can cut the course in two or three hours, if necessary, although we prefer to take longer and focus on quality." 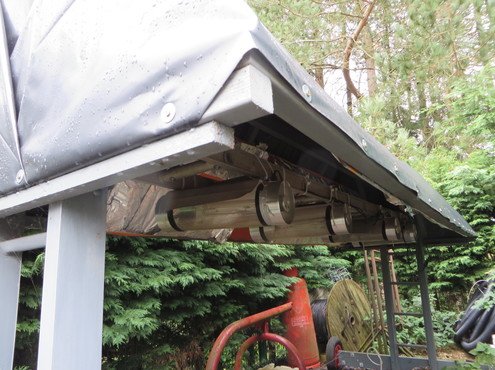 Left: Matthew King is developing a lighting rig to encourage germination in areas which get a lot of damage. Right: An old topdresser body has been converted into a repairs trailer, with an extra pair of wheels helping to roll the turf as it is infilled

The contour following ability of the Trimax has not gone unnoticed by the head greenkeeper of the nine-hole golf course which is at the centre and surrounds of the racecourse, and he has borrowed it on occasion to stripe the fairways!

Also on the shopping list is a smaller decompactor to replace the ancient Verti-drain which still does sterling duty.

"Having our own machine gives us the flexibility to go out when we need to, but it does take a bit of patching up, and we would prefer a lighter implement to go on a compact."

With two major agricultural machinery franchises plus an independent dealer in the town, there is plenty of opportunity to shop around for useful pieces of kit, such as a used hedgecutter.

Matthew's eye for innovation even extends to the labour intensive task of rail movements.

"We use the tractor loader with a chain to pull the rails out, and then relocate the posts before putting them back in with a petrol driven post driver suspended from the loader. It's quicker and easier for the groundsmen than using a sledgehammer to put the posts in."

Labour saving is important as there are just two full-time groundsmen to support Matthew, plus a part-time gardener.

In addition to looking after the turf for racing, the team has to make sure that the racecourse is in good condition year round for the caravan pitches.

"We site them all around the course, even on the member's lawn and in front of the grandstand, with the proviso that they move to centre course on racedays," explains David. 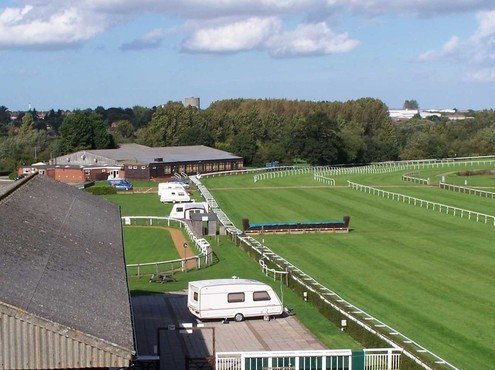 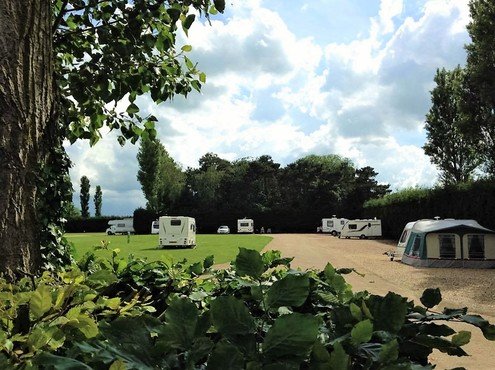 Pitches for 200 caravans bring useful income, but do incur ground damage which needs to be repaired

"Caravans and awnings do create an element of damage, but grass car parks are so much more attractive and in keeping with the course than hard standings. There is also the benefit that caravanners are very good at keeping an eye on the racecourse!"

Whilst the golf course has its own greenkeeping team, Matthew liaises closely with the head greenkeeper, and certain items of kit, such as the sprayer are shared.

"We have two Fibresand crossings and have to persuade golfers that these are the places to cross the course!" says David. "We also have to check for golf balls, although there is no golf on racedays."

Fence building and repairs are an important part of the job, with all frames built in-house to BHA guidelines and birch sourced locally.

The Fakenham team work closely with BHA regional course inspector Nick Carlisle who produced a glowing report on the condition of the turf after his pre-season visit, and also attends the first meeting and some subsequent racedays.

"Inspection is a highly positive process as it helps us prepare for the season, and to ensure that we can present the best racing surface possible," comments David.

As chief executive of Fakenham Racecourse, David reports to a board of directors, most of whom are based in East Anglia.

"We are not part of a large group, so everything that we do can be done for the love of racing rather than to fit in with company policy. We are also responsible to the local community."

At The Races, Fakenham was one of twenty-three courses to have signed up with The Racing Partnership (TRP) run by Arena Racing Company (ARC), which agreed a new deal to show racing in betting shops.