During his travels visiting schools, golf clubs, colleges and sports grounds on behalf of Pitchcare, David Mears has heard the name Adamson's mentioned favourably by many as their go-to service dealer. Intrigued by the approvals, he visited the company recently and spoke to Gillian Jenkins, General Manager, to find out more. 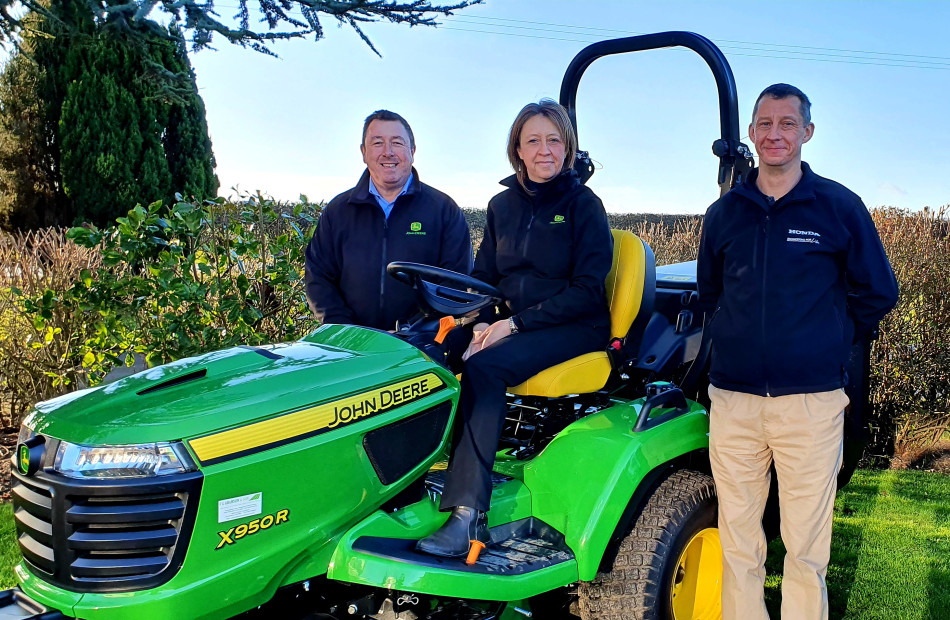 F G Adamson and Son is located on the outskirts of the village of Swanland, minutes away from the Humber Bridge and is the birthplace of Gillian Jenkins (nee Adamson). I asked how long she had worked for the business. "Actually working here full time was 2011, but I grew up on site, so during school holidays I worked part time," she told me. She'd lived with the business and associated activities around her throughout childhood and witnessed its growth. Following school and taking her A levels, Gillian went to university in Hull and achieved a 2:1 in Business Management. She went on to work with a Local Authority specialising in Benefits Fraud. "A far cry from working in a service dealership!" I exclaimed.

"It was a good position," she said "But my dad was getting older; he's seventy-five now, and the business needed a succession plan in place." No one person inspired her but growing up with those around her being part of the family business, it's needs and her business management skills were all that was required; Gillian joined the firm fulltime!

As we talked, Gillian remarked that the building we were in is on the site of her grandfather Fred's bungalow, demolished some years ago. "We are probably sitting where his sitting room was!" she remarked. "He worked as an agricultural contractor and also spent time fabricating with steel; lots of welding!" This led to Fred setting up the business as World War Two came to an end in 1945 with Fred's son Mike joining the business in the early 60s (see history).

There are two main partners: Mike Adamson (Gillian's father), and John Adamson (uncle). The management team now comprises Gillian Jenkins, General Manager, Michael Adamson (her brother) Home Owner Sales Manager, and Tony Jenkins (her husband) who is responsible for Commercial Sales. There is a total of thirty-eight people employed at head office in Swanland and a further eight at their new depot at Langworth in Lincolnshire. "This was opened in 2016, but as the premises were not large enough to cope with demand, we extended in 2019 doubling floorspace," said Gillian. "I'm pleased to say that business there continues to grow." 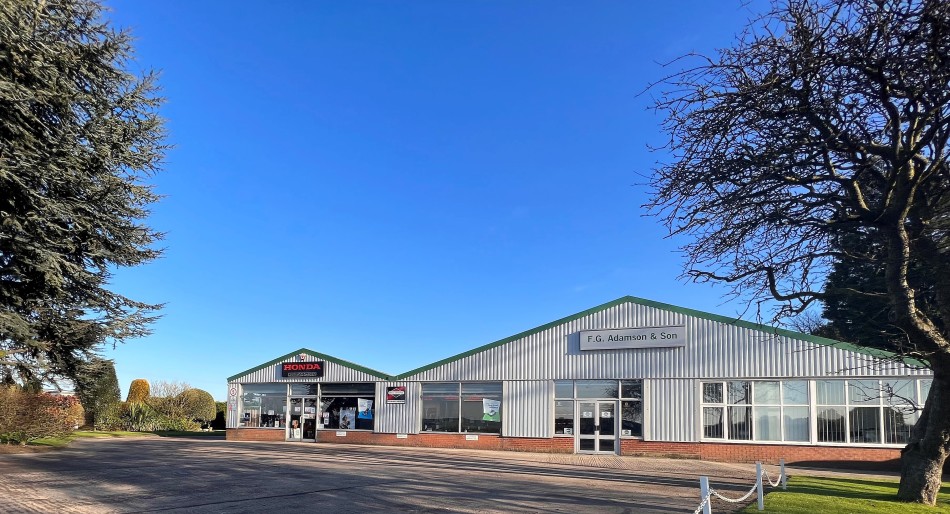 The Head Office depot at Swanland

The main head office site at Swanland is also performing well and was certainly busy as I was taken round by Tony Jenkins. I was amazed at the number on small machines (mowers mainly) awaiting servicing. "That's just a part of what we've got lined up," remarked Tony. The parts stores were very large and well stocked with thousands of parts. The company, gaining experience over the years, has been able to improve stockholding so that, in many cases, parts are, more often than not, off the shelf for the major manufacturers they represent.

The workshops were busy handling a variety of machines, commercial and domestic. The company employs thirteen trained technicians between both depots, four of whom are mobile. Outside, it was also a hive of activity as service and delivery vans came and went.

Machinery wash-off is clearly an essential part of everyday activities and their system was in action. Adamson's have an environmental policy in place and, keen on legislative compliance, pollution prevention and sustainability, have installed a ClearWater washpad water recycling system; it was certainly good to witness the powerful wash-off! Satisfied with the ClearWater system at the Langworth depot, another was ordered for Head Office, commissioned January 2022.

Back in the meeting room, Gillian picked up on ensuring legislative compliance elsewhere; there are waste management services in place and fuel storage is bunded. A Health and Safety Officer is employed and there are nominated and trained First Aiders at both depots. 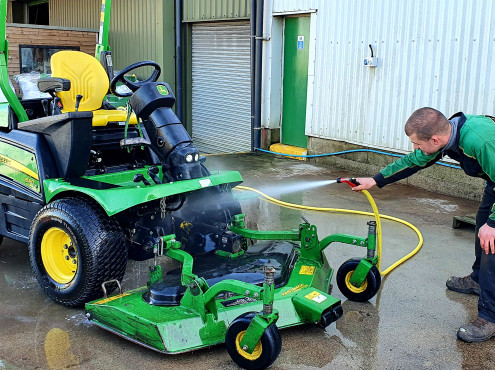 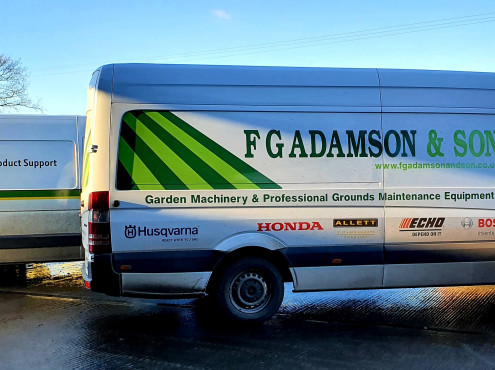 We then went on to discuss a little more about the business. I asked about their operating area, machinery brands stocked and customer profiles. "We operate within Yorkshire and Lincolnshire. We go north as far as Whitby and down to Grantham, A1 to the west and the coast to the east," she says. "Customers at both depots fit into two sectors: Home Owners and Commercial. On the commercial side, we serve, in the main, golf clubs, sports grounds, football, rugby and cricket clubs, local authorities, stately homes, holiday parks and, of course, contractors."

We next talked about the product range and brands. John Deere is a major line for them and they are the appointed distributor in the areas they cover. Other leading brands include: Allett, Echo, Hayter, Honda, Husqvarna, Lastec, Mountfield, Redexim, Roberine, STIHL, Trimax, and Westwood, along with a number of other good quality but less well-known manufacturers. The company operates a hire division, with scarifiers being the most popular domestic hirings. Turf cutters, verti-drains and overseeders are the mainstay of the commercial side. They do not offer contracting work but do carry out verti-draining occasionally when they provide an operator with the hired machine.

Michael has dropped in briefly and explained that the product range has grown and diversified in recent years and now, keeping up with the latest technology, cordless powered kit along with robotic mowers are in ascendance. He said that he'd need to rearrange the showroom display again to accommodate more of the new items! I complimented him on the showroom appearance and layout. This is what customers first see as they enter the premises and they pass through to whichever counter they need.

Talking of technology, it was said that all that would be needed one day would be a smart phone and a drone to perform jobs out on courses or grounds! GPS has been used for some time in the industry but its use is increasing, as is accuracy. Tony gave the John Deere HD200S GPS precision sprayer as an example. This uses satellite guidance and automatic steering, together with Mobile RTK, to provide accuracy levels of 2.5cm! The use also of drones is aiding not only spraying but fertiliser application as images provided will show areas that need treatment, often perhaps more than others. 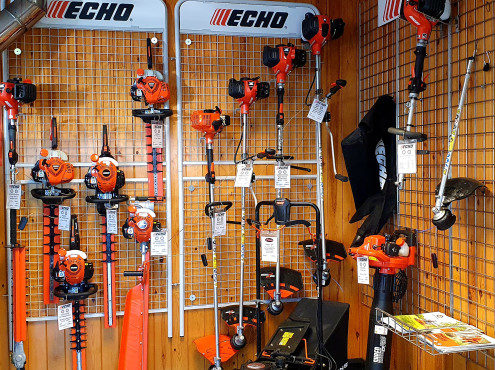 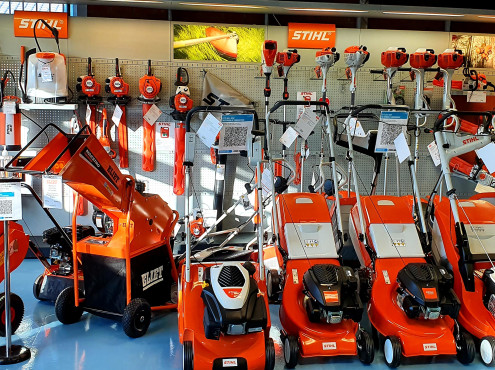 I must confess robotic mowers amaze me. I witnessed one in use recently at a stately home and it appeared from under a large tree and travelled to the area to be mowed. It was then busy cutting in a random pattern until done, then returned to its base to recharge itself automatically; and nobody was there! It was all pre-programmed and set to appear when visitors were not present. Most impressive!

I asked if Covid had affected the business, thinking of folk off sick or isolating etc., but Gillian's first answer, surprisingly, was that it had had a significant effect on demand. "Many people have been stuck at home, not going out or on holiday, so demand for machinery, particularly for garden work, grew along with servicing." More sales; that was the positive Covid news! The downside of Covid has been supply issues of parts and machinery caused by furlough, illness, factory short times, etc. Like many, Adamson's also had their own staff problems with people ill or isolating.

I raised the fact that I'd been told about Adamson's good reputation with clients I had visited and interviewed. Gillian was pleased to hear this and remarked: "We are focused on service. Get it right the first time and future sales should follow." Judging from five-star reviews on Google and elsewhere, it's safe to say that they do appear to be getting things right!"

Service is definitely key to the business and one current project is to further improve service processes and procedures and gain more efficiency.

Information Technology is now employed far more within the business and works as an aid to develop the business further. For example, they review customer services scores regularly with the aid of software use from main supplier John Deere. "This is a great help," says Gillian. "We want to grow our market share on all fronts." Service satisfaction and professionalism is key to this and Adamson's are ensuring that all staff are thoroughly trained. "John Deere are an excellent provider," remarks Gillian. Good communication, particularly with customers, is important too; I had spotted their sophisticated telephone system. 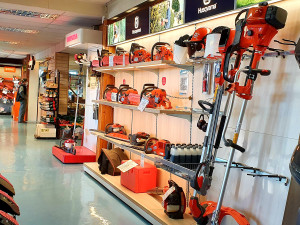 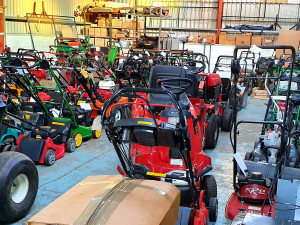 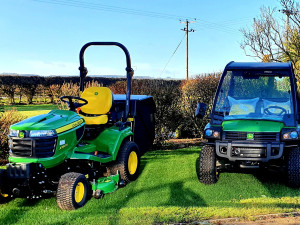 As part of their growth plans, the largest project for Adamson's followed their decision to open another depot in Lincolnshire in 2016. The initial work on this and the doubling in size in 2019 was handled by contractors. The decision was certainly worthwhile as the growth in subsequent business has confirmed.

As well as regular training, the company has embarked on an apprenticeship programme. Two were taken on,but one soon decided that it wasn't for him. The other, Nathan, aged 17, however, is into his first year and enjoying the John Deere Turf-Tech programme. "This is working well," comments Gillian. The Turf Technician apprenticeship develops exactly the same skills as its agricultural equivalent, but with the focus more on machines used by golf courses, sports grounds, local authorities, landscapers and country estates; which is exactly what is needed at Adamson's.

Before returning to the main offices, I was shown what Tony called the Testing Ground. It is a large lawned area beside the workshops with trees. This is where machines can be tested for correct performance and settings.

I was then introduced to Will Vernon, responsible for digital marketing. He was brought in specifically to develop a new website for the business. At the time of my visit, this was virtually ready for launch but still needed some tweaking. However, I was privileged to be allowed a sneak preview and what he has achieved is impressive. The new website introduces the company's new branding, including a standardised logo and colour palette. He's focussed on the areas around the two depots and, one of the main objectives has been to create an on-line ordering system including click and collect from customers' preferred depots. The new website is also mobile responsive, ensuring that customers get the same experience from whichever device they use to view the site. Detailed analytics are built in, which means that the site can be further optimised to enhance customer experience.

Knowing of Adamson's reputation for face-to-face service experience, the business wants to transfer this to customers using the website. This is what Will has worked on when creating the site, which should be another string to Adamson's marketing bow! 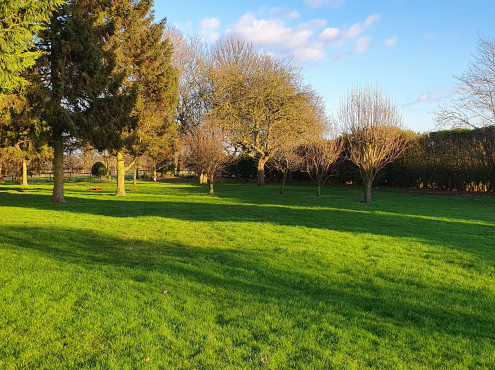 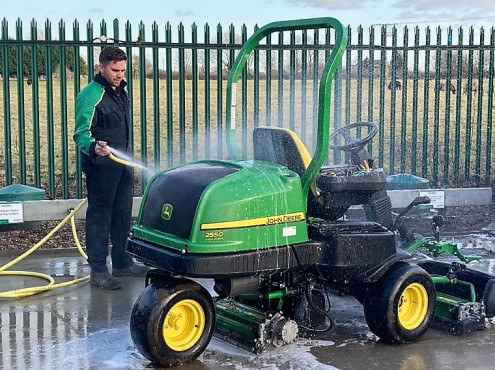 F G Adamson & Son's history began with Fred Adamson who started his business in 1945, on the site still used today at Swanland.

Fred worked as an agricultural contractor and, in time, turned his hand to the fabrication of agricultural trailers and the repair of large buckets used at a local smelting works. Fred's entrepreneurial spirit identified a local market for the service and repair of garden machinery and this soon became a big part of his business which, in turn, led to him selling new machinery too.

Fast forward to 1984 and Fred's other son, John, joined the business. Continued expansions of the business in terms of franchises, types of product offering and in physical premises has led to where they are today - as one of Yorkshire and Lincolnshire's foremost suppliers of garden machinery and professional groundscare equipment.

Their head office premises are located just outside the village of Swanland in the East Riding of Yorkshire and, in 2016, the company opened a depot in Langworth, Lincolnshire. 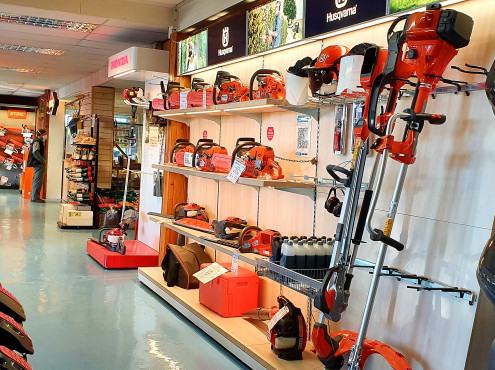 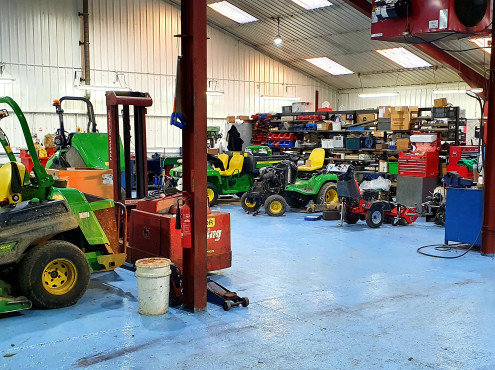 The large premises include spacious well stocked showrooms, parts departments which are stocked with thousands of spare parts and extensive workshops for their trained technicians.

A large warehouse ensures that most orders are met from stock and can be dispatched quickly.