It's been an uncharacteristically busy summer for Sir Alex Ferguson and Manchester United. 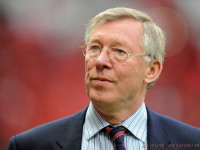 The Premier League champions have lost their biggest star, Ronaldo, and Carlos Tevez' has ended up at their cross city rivals, Man City.

But, when it comes to the condition of the pitches and the grass at their Carrington Training Ground and Old Trafford, Sir Alex can sleep easily.

It was the 1st July and Sir Alex's first official day back at the desk he is usually at by 7.00am every weekday morning. Tanned and rested from his traditional summer break in France and ready, as he approaches his sixty eighth birthday, for another season, he is easily the longest serving manager in the UK game.

The enthusiasm and will to win more trophies is undiminished. And don't, for a moment, think that there are only expensive players and even more expensive new recruits on his mind!

"The grass is first class - it should be at this time of year, you know, but, even so, it looks tremendous - ready for the lads to get going again" The latter comment made with more than a wry chuckle in his voice.

All of which is, in part at least, a far cry from his early days at St Johnstone, a club he joined as a teenager from the Glasgow district of Govan. There, he was a raw boned centre forward from junior football with his first professional contract.

"The pitch at McDiarmid Park in Perthshire was one of the best in the country - superb. Every time you went out to train or before a game you'd see the groundsman on his hands and knees pulling the weeds out and putting them in a leather bag he wore around his waist. He had such pride in what he did - and the pitch early season was terrific."

"By mid November you were playing in a swamp" Sir Alex recalled. "It was terrible and it got worse throughout the winter."
"In March it became very firm and really lively because, with the winds whipping across, it had dried out in the runs formed by the swamp of the winter months. It was bumpy and terrible to play on. Those April winds didn't help either" he recalled. 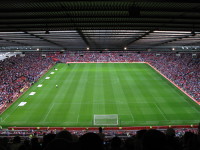 Today, in keeping with all managers and sportsmen, all that has changed and managers at the top of their game take a keen interest in the state of the pitch for training and matches.

"Tony Sinclair, our Head Groundsman at Old Trafford rings me up at least twice a week to keep me updated. and I always talk to him about an hour and a half before the game.

"Sometimes you want more water on it. Other times just the top moistened, depending on the weather we have had up here. Even though it's always supposed to rain in Manchester, believe me, it doesn't."

Tony Sinclair commands a team of five - a team which, to use Sir Alex's favourite word, do a "fantastic" job.

"The ground (at Old Trafford) has had a lot of issues over the years. When I first came here, in November 1986, it was a mess. No other word for it. It was a terrible surface but, nowadays, managers and groundsmen are very much more aware."

"The groundstaff know what to do and how to treat it. I don't understand too much of what they tell me but I know that drainage is important, as is the cut, and that they put sand on it when it's not so good."

"Trouble is, at Old Trafford, they play rugby as well, and that worries the hell out of us. England's first XV played Argentina and it's still the popular venue for rugby league's Super League play off final."

"It's great in many ways, but I tell you, for the groundstaff, and me for that matter, it's a big worry!" said Sir Alex.

Though the game's most successful manager admits to neither knowing nor, you suspect, wanting to know, too much about the nuances of growing and playing on turf, and just how much a ninety minute blood and guts Premier League game affects the grass, no one should be fooled into translating that into 'don't care'.

The canny Scot keeps his all-seeing eyes on everything that goes on at his club and relies on experts to keep him up to date.

Great attention to such detail was taken when Arsenal's Emirates Stadium was built to ensure that there is plenty of light, air and sun getting onto their pitch, and that this is good for growth and maintenance of the grass. Better perhaps than any other Premier League ground, including Old Trafford.

And Sir Alex is aware that pre-match warm-up routines, which are getting ever longer, don't help.

"When I was playing, and even not so very long ago it seems, they had a fifteen minute kick about. No more. Nowadays, some of them almost play half a game before the match starts, which is amazing" he said.

And he had praise for clubs that provide portable goals located between the match goal posts and the corner flags to save too much wear and tear in the goalmouth.

"They're doing it at Villa Park, Tottenham and Arsenal, as we are, and that's good - everybody should do that."

Being in Europe season after season, as well as taking its toll on the squad, also makes Sir Alex keep a keen eye on his match day pitch.

"UEFA rules mean that teams train the night before a game, on the pitch itself. I think that should be just half an hour, or something like that. But you see some of them shooting for ages and giving the pitch a real battering."

"And I think that's not on. When Inter Milan were here, Jose Mourinho (their manager) came to me and said how long can we use it? He was terrific. They all should be. But, if the groundsman yells at them to stop and get off, they just ignore him."

Clearly, with all that has to exercise Sir Alex Ferguson's mind, most people would be surprised that he does concern himself with the pitch. True, he leaves the small print and the detail of grass growing and grass care to the five groundstaff team. In turn they know what he wants.

And, showing an interest probably goes someway to explaining just why he is so successful as a manager, and has been for so long. He's probably forgotten more than most will know.