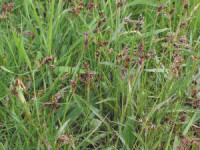 Rushes occur mainly, but not solely, on poorly drained soils of low pH. Infestations often arise in disturbed areas of pasture or where the sward is weak.

Rushes are a particular problem when poor pasture is ploughed for cropping as happened during World Wars 1 and 2. Some species have a spreading habit others are tuft forming like Field Wood Rush. Only a few of the British species are of importance as weeds and, in many other situations, rushes are valuable constituents of the natural vegetation.

PHYSICAL APPEARANCE: A compact, loosely tufted plant with leaves that have soft long hairs, unlike the other rushes. Field Wood Rush forms stands of coarse tufts, which are very noticeable in a fine lawn. It spreads by side shoots as well as by seed. When it is not flowering, the plant resembles a grass.
SITUATION: The plant commonly occurs in acid, infertile and badly drained soils. It quite often grows in association with Yarrow and this is a good indication that the soil is in poor condition.

GROWTH: The growth pattern is of a loosely tufted plant with leaves that have soft hairs.

FLOWERS: Chestnut brown flowers are produced on brush-like slender central stems, which can reach 15 cm, and are star-like in shape. The plants flower from March to June under normal growing conditions, then later set seed. The flowers can appear as three or six clusters.

REPRODUCTION: Field Wood Rush spreads by side shoots as well as by seed. During vegetative reproduction - rhizomes, which are underground and overground, slowly produce creeping stems; stolons will root at nodes and produce new plants. Pieces of root/shoot broken off from the parent plant can also re-root. 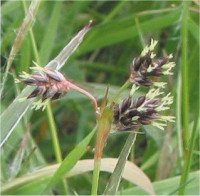 CULTURAL CONTROL MEASURES: Mow regularly to prevent flower and seed heads forming. Remove all clippings after mowing to prevent spread of seed. Feed and top-dress to encourage vigorous growth of the turf grasses. Hand weeding - individual weeds can be carefully lifted with a fork or pulled out by hand. Ensure all portions of root and stem are lifted to prevent re-growth. Remove existing plants; rake vigorously to raise runners, mow closely and remove all stems to prevent re-rooting. On light, very acid soils, apply a winter dressing of ground chalk or limestone.

CHEMICAL CONTROL MEASURES: There are no selective chemicals on the Amenity market that specifically list the control of this weed on their label. In practice, you often get good control when using straight Sulphate of Iron when applied as a moss control product or as a constituent of Lawn Sand. One application of Iron will scorch the older leaves and a repeat application 6 weeks later will scorch newly emerged leaves until the clumps decolonise and reduce in size. In practice, application of some of the Selective Weed Killers listed below have had the same reduction in the size of the clumps six weeks after the initial treatment, with a repeat 6 weeks later if the label permits more than one application of your chosen product per annum.

These selective herbicides are known in practice to have some success in infestation reduction: