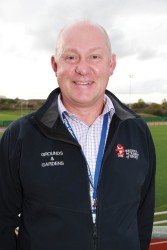 "The apprenticeship scheme is a great opportunity to take on young and enthusiastic staff"
Nigel Hornsby, Head of Grounds & Gardens, Filton College

Nigel Hornsby took on the role of Head of Grounds & Gardens at Filton College in September 2009. Previously, he had worked as Assistant Head Groundsman at Millfield School in Somerset, under the guidance of David Warner and, prior to that, had spent twenty-five years in the teaching profession in and around Birmingham.

One of his first tasks, on arriving at Filton College, was to put together a business plan, that could be used to gain necessary funding from various sports governing bodies and partners who support the college.

After much consultation, the college was successful in acquiring over £1,000,000 towards the upgrading of the existing sports facilities.

Filton is one of the new style academies, serving three clear groups of learners - fine art, performing arts and sport - all wishing to study a range of A levels and apprenticeship courses whilst still pursuing their chosen activity.

The college is based at the WISE Campus (West of England Institute of Specialised Education) between Filton and Stoke Gifford, on the northeast outskirts of Bristol. The campus, which opened in 2005, was built at a cost of £17.5 million on the site of an old secondary school which, itself, was rebuilt as part of the overall plan. Both the college and school have dual use over the sports facilities, with the school having access to any of the pitches during the day.

The college boasts one of the best athletics facilities in the southwest, having recently upgraded the basic six lane track to a top flight, eight lane facility with the most up-to-date track and field facilities on offer.

The upgrading of the athletics facilities, and in situ football pitch, was a key task that Nigel identified when he took on his position. The college had been offered the opportunity to host top flight women's football, but the existing pitch was not up to standard. It did not drain well, grass growth was nonexistent, and the soil was full of stone debris. This was due to the original poor installation.

The only option left to Nigel was a total rebuild whilst, at the same time, upgrading the athletics track, along with field facilities - shot putt, hammer, long jumps and a steeplechase water jump. The work was undertaken and completed by Kestrel Contractors.

So, in April 2010, Nigel put together a specification to remove the old football pitch, and replace it with a brand new one with full primary and secondary drainage, pop up watering system and floodlights.

The Stoke Gifford Stadium, as it is known, underwent a £500,000 investment to develop it into the only dedicated women's football stadium in the country to meet the Football Association's Women's Super League grounds grading standards. Now home to the Bristol Academy Women's Football Club (BAWFC), it is the first stadium to be designed primarily for women's football, and BAWFC are the only team in the Super League not affiliated to a professional football club.

The grounds maintenance at the college had previously been contracted out, until Nigel's appointment, but all of the work is now carried out in-house, with the assistance of Rob Lloyd and Sofia Sousa, apprentice groundstaff who are studying for NVQ Sports and Amenity Horticulture.

"The apprenticeship scheme is a great opportunity to take on young and enthusiastic staff," explained Nigel. "Their salary is being subsidised by the Government, along with additional funds from the college and, for the two years they are on the scheme, I will be mentoring them to ensure they are up to speed and competent in groundsmanship. My previous experience as a teacher has proved invaluable."

"Sofia, from Portugal, is trained in horticulture and spent a lot of time working abroad before applying for the apprenticeship scheme. Rob came straight from the college where he was studying sport. A very good golfer, he wanted to try his hand at sports turf management."

"When I came here I had very little to work with," said Nigel. "No staff, no equipment, and playing surfaces that required significant improvement and investment. There was also the major project of building a stadium that met the Football Association's requirements for the Women's Super League competition. Fortunately, I had the complete support of the Principal, Kevin Hamblin, whose goal is to have the best sports college in the country, and resources were readily provided, culminating in the superb facility we have here today."

"The stadium pitch is performing very well and has developed into what I believe to be one of the best playing surfaces in the Super League."

The pitch is managed like any other stadium pitch. Over fifty hours are spent preparing and repairing the pitch for matches. It is cut to a height of 30mm and mown on a daily basis throughout the growing season using a Dennis cassette cylinder mowers. The pitch is fed with a concoction of feeds, both granular and liquid

formulations. They also use pedestrian rotary mowers to keep the surface clean and to stand the grass up after matches.

Having completed the first phase of the five year project (stadium pitch and track facilities), the second phase is to gradually improve the condition of the other pitches on site. Again, these were not in the best of health when Nigel took over, all being natural soil based with a primary drainage system at ten metre centres. "Not ideal," stated Nigel. "As a result, surface levels and grass cover were poor."

These pitches cater for rugby, football and American football and Nigel is now addressing the problems on a pitch by pitch basis, starting with the number one rugby pitch.

Nigel was keen to try and incorporate rubber crumb into the surface to improve porosity, so it was koroed off, power harrowed and laser levelled, incorporating eighty tonnes of new rootzone and sixteen tonnes of rubber crumb. The pitch was then reseeded using Pro Select grass seed.

"I've been very impressed with the way the pitch is now draining and performing in terms of grass coverage and growth. Root depth has been measured down to 200mm and the pitch is standing up well to a lot of fixtures. The cost of this operation was about £9,000, not much more than the basic cost of an end of season renovation," he explained.

Being somewhat 'chuffed' with the results of the rubber crumb material in the pitch, Nigel then turned his thoughts on trialing it in another way, His second team rugby

pitch, again poorly drained, needed some work to improve the drainage capacity of the pitch. He then decided to try another method of utilising rubber crumb, this time using a Blec Sandmaster linear aerator to cut grooves 200mm deep at 200mm centres, but backfilling with rubber crumb material. "The results have been very interesting," said Nigel, "with both pitches showing improved performance in terms of drainage capacity, and sward quality."

The rugby pitches are mown using rotary mowers and kept at 100mm to cope with wear from so many games and training schedules.

Renovations of the outer soil-based pitches is based on the following; scarifying to remove debris, vertidraining, topdressing with 50 tonnes of sand and 50 tonnes of compost and oversowing with a rye grass mixture. The current budgets only allow two pitches to be done each year.

The college also provides a pitch for American football, with their season running from April through to October. This pitch is kept at around 70mm. All pitches are

marked using a laser spray jet marker, on a weekly or by fixture basis. It takes around three and a half hours to overmark the American football pitch using, on average, £140 worth of paint each time.

"I'm considering using some micro clover seed mixtures on some of the rugby pitches to help maintain some colour and improve appearance and durability. It may even save me some money and reduce the incidence of disease outbreaks. The pitches do tend to leach quickly, often resulting in outbreaks of red thread. This is generally overcome with a dose of fertiliser, but I'm hoping that the micro clover will reduce the need to feed so often."

With all of the pitches being used by both the college and the school, accommodating so many fixtures can be problematical. Fortunately, the college has a number of 3G synthetic pitches, both indoor and outdoor, to help lighten the load. These are maintained on a regular basis, being brushed and cleaned twice a week.

The staff work evenings and weekends on a rota system, as they are required to be on duty during the stadium football matches, athletic events and other main events. They are given time off in lieu for working these rotas.

Nigel is aware that the site is becoming busier, with more and more demands being put on the pitches, so he is aiming to increase the team to six over the next couple of years. He has just interviewed another potential apprentice.

In fact, so successful has the surface at the Stoke Gifford Stadium been, that BAWFC has become the first women's team in the country to launched a new senior men's side. The team will play in the David Wilson Homes Gloucestershire FA County League, with the 'same home, same kit, same badge' ethos installed throughout the club.

"The long term plan is to continue to improve the pitches," concluded Nigel, "and to continue to train and develop my staff so that they can further their careers in the sports turf industry."

Nigel appears to have settled well into his new surroundings and is to be applauded for his commitment, not only to the surfaces he tends, but also to youth training.