"There are many leagues in Lancashire and they play a really important part in bringing through our next generation of cricketers"
Mike Watkinson, Director of Cricket, Lancashire CCC 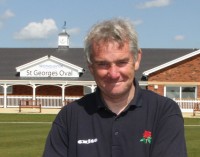 Lancashire County Cricket Club's Director of Cricket, Mike Watkinson, believes the onus is firmly on local clubs to bring through the next Andrew (Freddie) Flintoff or Jimmy Anderson.

The demise of the sport in schools means there are few other avenues for the stars of the future to rise through the system.

And, the former England and Lancashire all-rounder admits it is becoming harder for cricket to compete with the various other modern day distractions.
"The leagues are in competition with so many more varied interests than they were thirty years ago," he said. "Back when I started out, kids would have a football or a cricket bat, and that would be it."

"There are many leagues in Lancashire and they play a really important part in bringing through our next generation of cricketers."

One such club that has always provided a steady flow of talented cricketers is Watkinson's old club, Westhoughton Cricket Club, who play in the Bolton League, and that trend will hopefully continue, especially now they have one of the newest and best equipped grounds in the county.

The club began life somewhere back in the mid 19th century, although nobody is too sure when, as there were no records kept. 1864 appears to be the likely year the club was founded.

Westhoughton was the scene of one of the worst mining disasters in the country when, in December 1910, 344 men lost their lives. Situated just five miles from Bolton and fifteen miles from Manchester, the town is at the very heart of the cricketing traditions of Lancashire.

The new facilities came about after supermarket chain, Sainsburys, bought the old ground for the site of a new superstore in the town, enabling the club to build a brand new ground and clubhouse costing £2 million, a far cry from the £30.12s.5d they had to shell out for a new ground in 1875!

The club employed the services of Club Design Ltd. to design and project manage the new facilities. The ground construction work was awarded to John Mallison (Ormskirk) Ltd. Work began on building a twenty strip square and large outfield in 2008, with the new facilities officially opened in August 2009. The club also received input from former Old Trafford groundsman, Pete Marron, to oversee some of the work.

The ground is protected by a 6ft high perimeter fence and, whilst an expensive item in itself, was added to, to the tune of £25,000, when Great Crested Newts were found on the site. The extra cost was to comply with planning regulations, conducting a survey and building a 'newt run' to a nearby pond.

The club were also required to plant over one hundred trees and various hedges to soften the fence line. A memorial garden was also constructed to allow members to remember their loved ones.

A two bay practice net was installed at a cost of £25,000. Unfortunately, this has already suffered some mindless vandalism when a section of the artificial carpet was cut away!

The club have also installed the latest, advanced technology scoreboard, which allows the scorer to upload remotely from any part of the ground or clubhouse - perfect if he fancies a pint!

The club run three senior men's sides and provide a number of junior teams from under 11s to under 18s. Total membership hovers at around 1,000, providing an important social life for the town. They also have a thriving ladies rounders league, utilising some spare ground away from the outfield. The club run five teams using two rounders courts. Matches are played most evenings throughout the summer months.

Westhoughton have appointed Gary Dixon, a former player, as chairman. Gary runs a tight ship, organising a number of people to help run the club. All the work is on a voluntary basis, apart from the cricket coach, groundsman and bar steward.

The club are keen to maximise the earning potential of the new clubhouse facilities. There are already over 150 bookings for weddings, corporate business and birthday bashes. As Gary points out, it is all well and good having great facilities, but they must be managed correctly to ensure the future of the club.

The club has enlisted the services of Paul Tatton as Head Groundsman to oversee all the maintenance works required at the club. He is also one of three ECB Pitch Advisors for Lancashire.

Paul is well known in Lancashire, having spent most of his working life involved in cricket in one capacity or another. He started taking an interest in grounds as an 18 year old at Farnworth CC. He played as a professional for a number of clubs, including Read CC , Atherton CC and the Walker Institute. During his playing career he represented the County, playing for Lancashire seconds. He currently stands as an umpire and also helps out with coaching when time allows.

Paul has advised the club on equipment purchase, and they now have a new Poweroll 15 roller, a John Deere 2653A ride on triple, a John Deere X300R rotary mower, a JD Gator and a Dennis FT 610 cassette mower and, at the time of writing, were awaiting the delivery of a Lloyds Paladin for cutting the strips.

As Paul has access to the ECB County Trailer, that provides a SISIS Mk4 scarifier and Groundsman spiker, he felt that purchasing these two bits of kit, which are primarily only used for renovations and winter spiking, was not necessary.

The club has also invested in roll on roll off covers from Stuart Canvas, plus a number of flat sheets that enable the whole square to be covered, plus bowlers run ups, as required. There are two 75m x 15m drapes that fit on the covers, two 75m x 50m drag on sheets and two 30m x 15m bowlers run up sheets. The raised covers are easy to manouvre, but it takes around six people to help put out and move the flat sheets. This is where the Gator is particularly useful.

The square is built on a gravel raft and has a perimeter drain and trap facilities. It was constructed using 100mm of Boughton Club Kettering loam (27%) which was upgraded to Boughton County loam during renovations.

The outfield has a primary drainage system, installed at three metre centres, to ensure the ground can drain at a rate of 13 litres per second, helping to reduce the number of games lost to rain. Existing soil was ameliorated with 50mm of sand to improve the surface drainage capabilities of the outfield.

As with any new builds, there have been a few teething problems, with a majority of the cut and fill work undertaken using existing soils which produced some settlement problems in parts of the outfield. Paul has instigated some localised repairs and seeding to re-establish levels and sward composition.

Whilst it is still early days - the square is barely 15 months old and still growing in - more root growth is needed to reduce a few plating problems, but these are not causing huge concern. Paul is monitoring the situation, and is confident it will improve in time as root growth strengthens. The worse case scenario would be to introduce more loam into the cracks, and monitor moisture levels to prevent the loam from cracking.

Having come through a tough winter, Paul decided he needed to rectify some poor levels and improve sward density, so he undertook a light renovation programme in March, carrying out some scarification, adding 3-4 bags of loam per track and overseeding with R9. This appeared to do the trick.

Pre season rolling was curtailed a bit this spring, due to the poor weather. However, he must be doing something right, as the County side will be playing two, four day, first team fixtures next year, whilst the square at Old Trafford is turned through ninety degrees.

With this in mind, Paul consulted with Old Trafford's Head Groundsman, Matt Merchant, to see what needed to be done to ensure the tracks would be okay for the allocated matches. It was agreed that three central strips would be decommissioned from play and renovated in late May 2010, the strips to be fraise mown, levelled, deep spiked, topdressed with Boughton County Loam and re-sown with a BSH seed mix, the aim being to get decent root growth and a deeper loam profile during this summer's growing season. Paul has also fed the square with a granular 12:0:6 NPK fertiliser to promote growth.

The square gets cut at 9mm during the growing season and reduced to a match playing height of 3mm via a ten - fourteen day preparation programme.

This is where the Dennis FT610 cassette comes in useful, with the tungsten verticut reel fitted to clean out debris. There is a hydrant at the corner of the square for watering.

Early season performance of the square has seen good pace and bounce. The rest of the summer will be based on fulfilling a busy fixture list until the end of the season.

Paul has good experience of maintaining new grounds, having done similar at Haydock Cricket Club, and which he continues to oversee, eleven years later. Paul is confident that Westhoughton will be successful, but it needs the support from players and social members. Running a modern cricket clubs takes a lot of time and commitment from all concerned, and comes at a high cost.

As an example, on the grounds side alone, the club has to commit around £40,000 each year to materials, machinery, consumables and wages, so it is important that they have the means to generate such figures by being organised and well run.

Westhoughton will, no doubt, attract new players. The club have a policy of not paying players, so rely on the fact that they want to join a forward thinking club with excellent facilities and good coaching programmes. Who knows, maybe the next Freddie is already turning his arm over in one of Westhoughton's junior teams.